This is what Hurricane Dorian's eye looks like from the inside 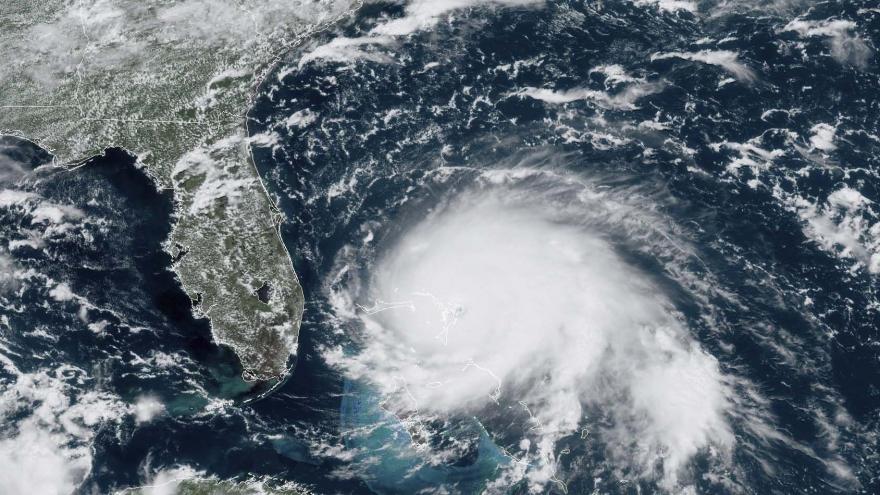 An Air Force captain shares his extraordinary photo of the monster storm's eyewall.

(CNN) -- If you've ever wondered what it looks like inside a hurricane's eye -- without having to actually be in it yourself -- check out this picture from Air Force Capt. Garrett Black.

Black, a meteorologist and hurricane hunter, snapped it while flying through Hurricane Dorian on Sunday. In the extraordinary photo you can see Dorian's eyewall, which is a solid wall of clouds, with the sun shining brightly through a blue sky above.

"The storm itself, once we get into the eye, was incredible. It's one really that I've never seen quite to that extent," he told CNN's "New Day" on Monday. "We had the giant cumulus towers surrounding us that gave us the same effect it felt like we were sitting in the center of a football stadium. Then we could also see the water at the surface and see how calm it was directly below us but could see off in the distance how large the waves were."

Black and his crew went through the storm as Dorian barreled through the Bahamas, and the winds inside the hurricane were blowing at a "terrifying" 185 miles per hour.

"It was rather remarkable," he said. "We entered the storm when it was a Category 4. As we continued to fly, we saw the pressure continue to drop inside the center. And the winds continued to pick up. And the final report when we left, right as it was ready to make landfall there in the Bahamas, the winds were 185 miles per hour. Which is absolutely terrifying and catastrophic. Especially for the Bahamas there."

He also talked about seeing flashes of lightning during such flights through hurricanes, which "always kind of grabs my attention."

Hurricane Dorian made landfall in the Bahamas Sunday night and left catastrophic destruction in its wake, according to government officials.