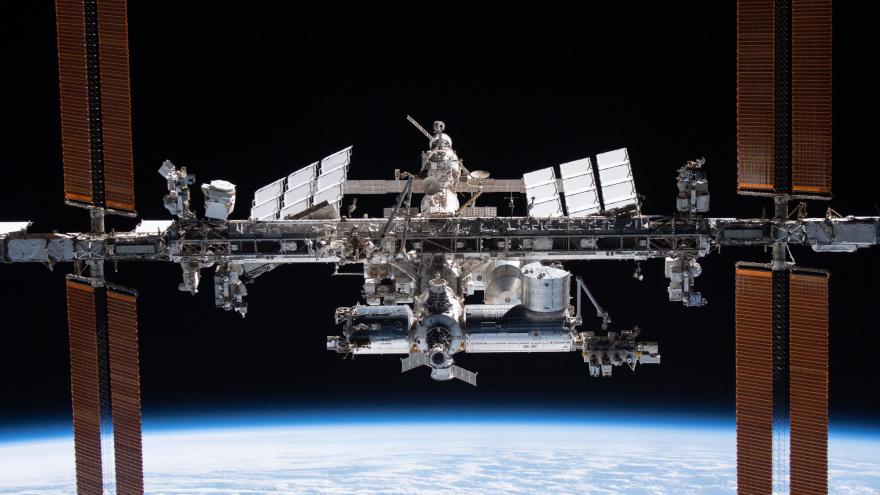 (CNN) -- Three thousand miles off the coast of New Zealand and 2,000 miles north of Antarctica, Point Nemo is so far from land that the closest humans are often the astronauts on board the International Space Station -- that orbits 227 nauticalmiles above Earth.

It's precisely this remoteness that explains why the ISS, once it's retired in 2030, will end its days here, plummeting to Earth to join other decommissioned space stations, satellites and space debris. This is the world's space graveyard.

Spacefaring nations have been dumping their junk in the area around Point Nemo, named after Captain Nemo from Jules Verne's novel "Twenty Thousand Leagues Under The Sea," since the 1970s.

Also known as the Oceanic Pole of Inaccessibility or South Pacific Ocean Uninhabited Area, the exact coordinates of the world's most remote spot were calculated by Canadian-Russian engineer Hrvoje Lukatela in 1992.

More than 263 pieces of space debris have been sunk in this area since 1971, including Russia's Mir space station and NASA's first space station Skylab, according to a 2019 study. They're not intact monuments to the history of space travel but are likely fragmented debris scattered over a large area.

"This is the largest ocean area without any islands. It is just the safest area where the long fall-out zone of debris after a re-entry fits into," said Holger Krag, Head of the Space Safety Programme Office at the European Space Agency.

Point Nemo is beyond any state's jurisdiction and is devoid of any human life -- although it's not free from the traces of human impact. In addition to the space junk on the seafloor, microplastic particles were discovered in the waters when yachts in the Volvo Ocean Race passed through the region in 2018.

Space junk such as old satellites reenter the Earth's atmosphere on a daily basis, although most of it goes unnoticed because it burns up long before it can hit the ground.

It's only larger space debris -- such as spacecraft and rocket parts -- that pose a very small risk to humans and infrastructure on the ground. Space agencies and operators must plan well in advance to ensure that it falls to Earth in this far-flung bit of ocean.

In the case of the International Space Station, NASA said the ISS will begin maneuvers to prepare for deorbit as early as 2026, lowering the altitude of the space lab, with it expected to crash back to Earth in 2031. The exact timings of the maneuvers depends on the solar cycle activity and its effect on Earth's atmosphere.

Space agencies and commercial operators must also notify authorities in control of flights and shipping -- usually in Chile, New Zealand and Tahiti -- of the location, timing and dimensions of the debris fall-out zones. Around two flights per day pass through the air space, said Krag. These authorities produce standardized message sent out to air and sea traffic.

A bigger problem than the spacecraft that end up in Point Nemo, said Krag, is chunks of metal rocket stages and spacecraft making what's known as an "uncontrolled reentry" into the Earth's atmosphere.

In June 2021, NASA criticized China for failing to "meet responsible standards" after debris from its out-of-control Long March 5B rocket plunged into the Indian Ocean.

"Spacefaring nations must minimize the risks to people and property on Earth of re-entries of space objects and maximize transparency regarding those operations," said NASA Administrator Bill Nelson at the time.

The rocket, which was about 108 feet tall and weighed nearly 40,000 pounds, had launched a piece of a new Chinese space station into orbit on April 29. After its fuel was spent, the rocket had been left to hurtle through space uncontrolled until Earth's gravity dragged it back to the ground.

Krag said that, on average, 100 to 200 tons of space junk reenter the Earth's atmosphere in an uncontrolled way every year, yet most space experts consider reentry the most desirable outcome for space junk.

The vast majority stays above us where it can collide with functioning satellites, create more junk and threaten human life on crewed spacecraft.

There are at least 26,000 pieces of space junk orbiting the Earth that are the size of a softball or larger and could destroy a satellite on impact; over 500,000 the size of a marble big enough to cause damage to spacecraft or satellites; and over 100 million pieces of debris the size of a grain of salt that could puncture a spacesuit, according to a NASA report issued last year.

Landing space junk in the ocean depths of Point Nemo is the least worst option, said Vito De Lucia, a professor of law at the Norwegian Centre for the Law of the Sea at The Arctic University of Norway. However, we don't know much about the deep sea environment in this area.

Some research suggests that because of ocean currents in that region -- known as the South Pacific Gyre -- it is not particularly biologically diverse. Oceanographer Autun Purser, a postdoctoral researcher at the Alfred Wegener Institute in Bremerhaven, Germany, said he had been close the area and said the seafloor would likely be inhabited with sea cucumbers, seabed octopuses and "the odd fish."

"There is generally a low reign of food, as it is in the middle of the Pacific Gyre, a low productivity area with little upwelling nutrient rich waters, so though there will be seafloor animals, there will not be a high biomass down there probably," he said via email.

Krag at the European Space Agency said that the space objects that landed in the ocean were typically made from stainless steel, titanium or aluminum and were not toxic.

"It is not more than a few dozens of metric tons per year. The re-entering fragments do not float, but sink and therefore are no hazard to ship traffic. Compared to the many lost containers and sunk ships, the amount of space hardware is vanishingly small."

He noted that some rocket fuels are toxic but that they burn up during re-entry.

Krag said that ESA was working on what he termed "design-for-demise" technology that would replace the aluminum, titanium and steel with materials that would melt during reentry.