This is the damage rioters caused to the Capitol building 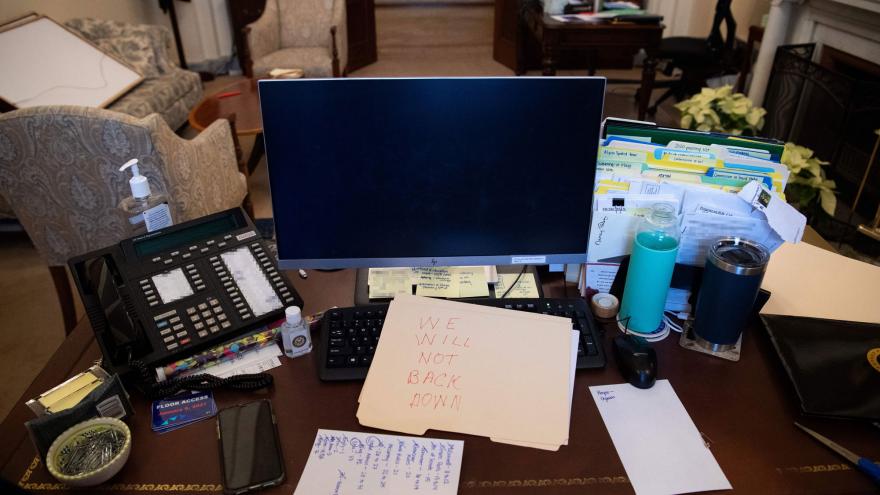 (CNN) -- The US Capitol is arguably the country's most iconic building.

And while the storied meeting place of the US Congress has come under attack before, Wednesday's chaos was the worst breach there since 1814.

A mob of President Donald Trump's supporters -- egged on by the President himself -- stormed the Capitol in an attempt to stop the counting of electoral votes that would confirm President-elect Joe Biden's win. They smashed windows, trashed offices and occupied House and Senate chambers in one of the most jarring displays of insurrection in our nation's history.

The riot left scars -- both literal and figurative ones. These photos show some of the damage.

The reflection of an American flag is seen through door windows smashed by rioters.

A Gadsden flag hangs between two broken windows inside the Capitol. The yellow flag depicting a rattlesnake with the phrase "Don't Tread On Me" has been used as a symbol by Tea Party supporters, gun rights activists and in recent years, far-right groups.

A flag emblazoned with the word "TREASON" lies on the floor as fire extinguishers line the hall.

Some pro-Trump rioters broke into House Speaker Nancy Pelosi's office. This damaged sign outside is one example of the vandalism that occurred.

Rioters left a message on Pelosi's desk that reads, "WE WILL NOT BACK DOWN."

The office of the Senate parliamentarian, who advises the Senate on how to interpret its rules, sits on the first floor of the Capitol, adjacent to one of the main doors breached by the mob. A still image from a video captured by CNN's Ali Zaslav and Ted Barrett shows papers scattered across the floor of the office.

A rioter carries the lectern of House Speaker Nancy Pelosi through the Rotunda.

A Trump supporter wearing a MAGA hat sits at a desk in an office, clutching an American flag.

This rioter made his way to the Senate dais, where Vice President Mike Pence sat earlier that day -- and later that night -- as Congress met to certify the Electoral College results.