This is the coronavirus' staggering toll in the US 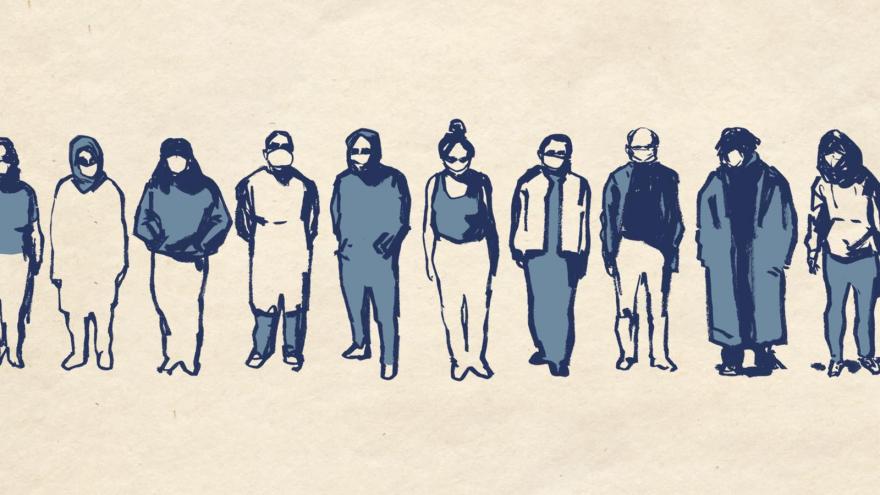 Coronavirus has now killed at least 100,000 people in the US since the first death was reported in February, according to Johns Hopkins University's case count.

(CNN) -- How do you calculate the cost of an American tragedy?

It's difficult to comprehend just how drastically the Covid-19 pandemic has disrupted life in the US when its effects are so wide-reaching. Unemployment has soared to levels not seen in decades. The virus is ravaging African American and Latino communities. And daily life as we knew it is on indefinite pause.

The following figures make those consequences clearer. Here, in dollars, percentages and -- most tragically -- lives, is the devastating toll the pandemic has taken on the US.

The virus has killed more than 100,000 Americans

Coronavirus has now killed at least 100,000 people in the US since the first death was reported in February, according to Johns Hopkins University's case count. That's an average of nearly 900 deaths per day.

Nearly 80% of all deaths occur in people over 65

Older adults are exceedingly vulnerable to severe infection from coronavirus. And according to CDC data, that risk increases with age.

About 59% of all coronavirus deaths occur in people 75 and older, according to the CDC, which relies on less complete data than the Johns Hopkins University count.

The US leads the world in cases and deaths

The US death rate is 2.6 times higher than the second leading country, the United Kingdom. The UK has reported 36,875 deaths so far, according to Johns Hopkins University's global case count.

Both the US and the UK have heard mixed messages from leadership. President Donald Trump has repeatedly downplayed the virus and ceded decisions about closing and reopening to the states.

In the UK, Prime Minister Boris Johnson's new message of "Stay Alert, Control the Virus, Save Lives" has confused leaders of the three other nations in the UK, who aren't sure whether the guidance applies to them or just Britain.

Nearly as many Americans have died of Covid-19 as in the wars in Vietnam, Korea, Iraq and Afghanistan combined

More than 58,000 Americans died in Vietnam. The US coronavirus death rate is 1.7 times higher.

4,431 Americans died in Iraq. The US coronavirus death rate is 22 times higher.

2,445 Americans died in Afghanistan. The US coronavirus death rate is nearly 40 times higher.

And by June more Americans will have likely died of coronavirus than in all four of those conflicts combined.

More than 35,100 nursing home deaths have been reported in 37 states, out of 174,381 cases in 42 states, according to data from the Kaiser Family Foundation.

Not all states are reporting infections and deaths in nursing homes and long-term care facilities, so these numbers may be higher on a national scale.

With their highly vulnerable residents, frequent visitors and relatively close quarters, nursing homes are hotbeds for infection. The first significant coronavirus outbreak in the US occurred at a facility in Washington state, where at least 35 people died and dozens more residents and staff were infected.

Black Americans represent 13% of the population in the 40 states plus DC that have released mortality data, but they account for 25% of deaths, according to an analysis from the American Public Media (APM) Research Lab.

"If they had died of Covid-19 at the same rate as white Americans, about 12,000 black Americans, 1,300 Latino Americans and 300 Asian Americans would still be alive," the lab said.

By comparison, white Americans, who make up 61.7% of the states that have released race mortality data, account for 49.3% of all deaths in those states. In all, white people represent 21 in 100,00 deaths.

The Navajo Nation has the nation's highest per-capita infection rate

Data on Covid-19's impact on indigenous people is incomplete, but the numbers that do exist are bleak.

The two states have seen a combined 40,279 deaths, according to Johns Hopkins University's count. That's more than 41% of the 97,722 deaths reported as of Monday.

The epicenter of the country's outbreak is New York City, the most populous city in the US with 8 million residents. It's also got the country's highest population density, with 27,000 people per square mile. That, coupled with a subway system that sees 5.5 million commuters daily, make it prime breeding ground for infection.

New Jersey, across the Hudson River from Manhattan, is home to hundreds of thousands of commuters who worked in the city before the pandemic hit. Plus, it has the highest population density of any state.

Coronavirus is 2 to 3 times more contagious than the flu

Researchers say the US could have prevented 84% of its deaths

If the US had locked down two weeks earlier than it did in late March and early April, 82% of its cases and 84% of its deaths could've been avoided, according to Columbia University researchers.

And if states took social distancing measures just one week earlier, more than half the number of deaths and infections would've been prevented, the researchers said.

The US still predicts up to 240,000 deaths in the first wave

Dr. Deborah Birx of the White House's coronavirus task force told Fox's Chris Wallace on Sunday that she stands by the original model, which predicted anywhere from 100,000 to 240,000 deaths. At the beginning of May, Trump said he predicted 80,000 to 90,000 deaths, which the US has already exceeded.

A second peak may follow the first wave with an even higher death toll, the World Health Organization warned Monday.

Countries must be prepared that the virus could "jump up at any time," and another peak could likely occur during flu season, said Dr. Mike Ryan, executive director of WHO's Health Emergencies Programme.

There were 378,908 new Covid-19 tests reported on Sunday, according to the Atlantic's Covid-19 Tracking Project. That's a significant uptick since March 24, when states conducted 68,454 tests. But it's still not enough to safely reopen, according to the Harvard Global Health Institute.

In early May the institute said the US should test at least 900,000 people every day by May 15.

Though testing access has improved considerably since the start of the pandemic, faulty tests issued by the CDC are thought to have contributed to the slow US response to the virus. Still, the responsibility to ramp up testing falls to the states, per the Trump administration's latest testing report.

The US economy had its worst quarter since the 2008 recession

America's first-quarter GDP, the most expansive measure of the US economy, fell at a 4.8% annualized rate, the US Bureau of Economic Analysis reported in May.

43 states reported record unemployment in May

Unemployment nationwide has risen to 14.7% as 36.5 million Americans have filed for jobless benefits since mid-March.

Nevada's unemployment rate is the worst in the country at 28.2%, significantly higher than its rate of 6.9% in March. Michigan and Hawaii had the next highest unemployment rates at 22.7% and 22.3%, respectively.

Things may get even worse. US Secretary of the Treasury Steve Mnuchin told Fox News' Chris Wallace that the US could get close to jobless rates not seen since the Great Depression, when unemployment peaked at 25%.

Grocery prices have risen as much as 16%

Overall, the price of groceries grew 2.6% in April. That was the biggest increase from one month to the next since 1974, according to the Bureau of Labor Statistics.

It's because of disruptions in the food supply chain. Restaurants shut down, more Americans started cooking at home and more people started buying groceries, though food producers couldn't speed up their deliveries at the same rate.