'This invasion is horrifying': What it's like on the ground in Lviv following Russian missile attacks 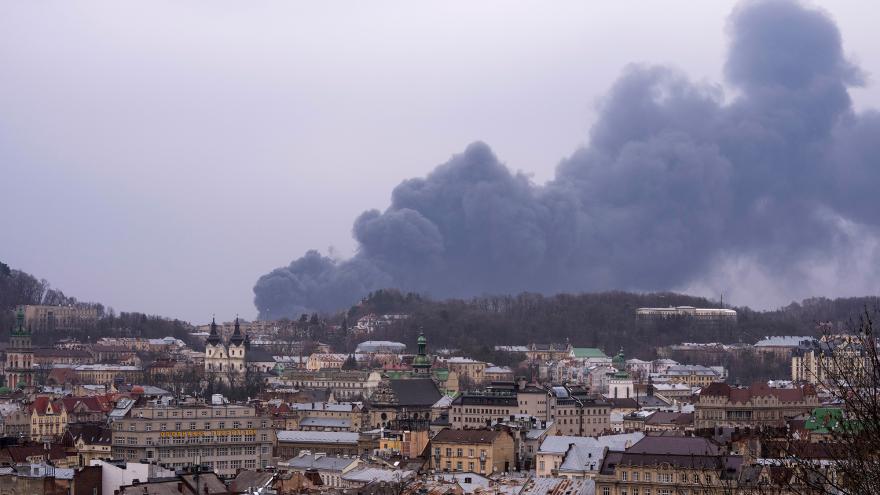 (CNN) -- At least five people were reportedly injured over the weekend after at least two missiles struck Lviv, a city in western Ukraine that had been previously spared the worst of Russia's brutal onslaught, local officials said.

One of the strikes hit a fuel storage facility, causing it to catch fire, and a later strike caused "significant damage" to the city's infrastructure facilities, according to the city's mayor, Andriy Sadovyi.

For a better sense of the situation on the ground, we posed a few questions to CNN's John Berman, who's been covering the invasion from Lviv. His responses, sent via email on Sunday, are below:

WHAT MATTERS: Can you describe how people in Lviv are behaving at this moment?

BERMAN: We went out to one of the main squares today, less than 24 hours after a series of Russian missile strikes, and it was packed. So many people out enjoying the beautiful weather and street music and food.

It was astounding. Their reasons for being there were twofold. Some people told us it was their way of showing Putin that they can't be intimidated. But the majority of people we spoke with were actually from different parts of the country, and, frankly, they have seen worse. So the missile strikes here did not scare them, at least not as much as the things they have lived through in Kharkiv or Sumy or Kyiv.

WHAT MATTERS: What are locals telling you about their future plans in the face of such uncertainty?

BERMAN: When you ask about the future, every Ukrainian we have spoken with tells us that their plans are to resist, to fight and to win. There is nothing else.

There are different ways of doing this, and some have made sure the vulnerable family members are out of the country. But Ukrainians really see only one way through this.

WHAT MATTERS: You spent time in a Ukrainian children's hospital; can you describe what you saw?

BERMAN: We met 15-year-old Andriy at a children's hospital. He is from Chernihiv, which has been brutalized by the Russians. He was forced from his home at gunpoint, and then later in a car drove over what he described as a land mine. He injured both legs and his collarbone. His mother died in the blast. The last time he saw her, she was still alive, and on fire. It is horrifying to write those words. But this invasion is horrifying.

Every political and diplomatic discussion anyone has needs to begin by acknowledging this point.

And on a personal level, it is just heartbreaking.

Biden's (off-the-cuff) declaration. President Joe Biden said forcefully Saturday that Russian President Vladimir Putin "cannot remain in power," but the White House said afterward that it was not a call for regime change.

"For God's sake, this man cannot remain in power," Biden announced at the very conclusion of a capstone address delivered at the Royal Castle in Warsaw.

"The President's point was that Putin cannot be allowed to exercise power over his neighbors or the region. He was not discussing Putin's power in Russia, or regime change," a White House official said later.

Volodymyr Zelensky's plea. The Ukrainian President this weekend reiterated his plea for international partners to step up their military assistance, saying his country asks for only 1% of NATO's tanks and planes.

In a video message posted to social media, Zelensky said the need to strengthen common security in Europe was raised during his two conversations with Polish President Andrzej Duda on Saturday.

Zelensky lamented that Ukraine has been waiting for 31 days for this assistance, saying it raises the question of who exactly "is ruling the Euro-Atlantic Alliance." He called on Ukraine's international partners to "rally and activate their support" for the country, stressing that Europe's safety and security hinge on it.

A statement from the Turkish presidency's communications directorate said that during a phone call on Sunday Turkish President Recep Tayyip Erdogan and Putin "agreed that the next meeting of the Russian and Ukrainian delegations will be held in Istanbul."