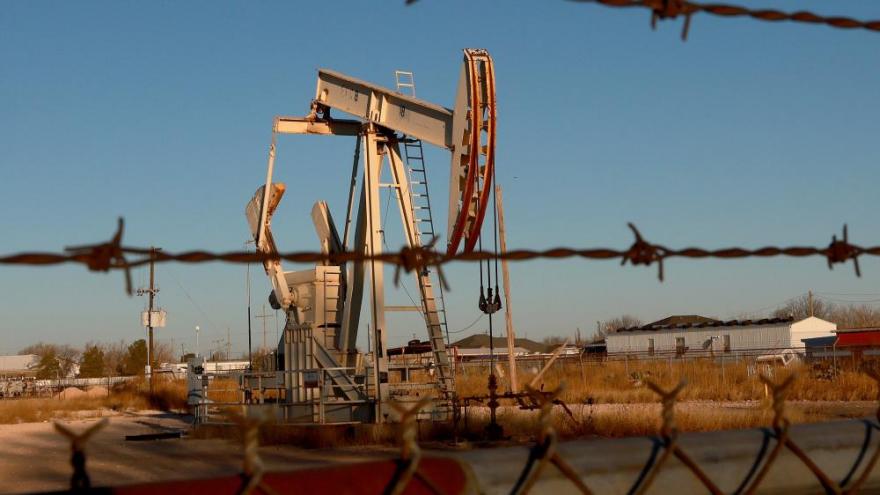 An oil pumpjack works in the Permian Basin oil field on March 13 in Odessa, Texas. A potent planet-warming gas set a record for the second year in a row, scientists reported April 7, just as the UN's panel on climate change warned the world is running out of time to rein in fossil fuel emissions.

(CNN) -- A potent planet-warming gas set a record for the second year in a row, scientists reported Thursday, just as the UN's panel on climate change warned the world is running out of time to rein in fossil fuel emissions.

Methane — the second largest contributor to the human-caused climate crisis after carbon dioxide — increased in the atmosphere by the largest amount in 2021 since measurements began nearly 40 years ago, the National Oceanic and Atmospheric Administration said.

The invisible, odorless gas leaks into the atmosphere mainly from oil and gas operations, and often goes undetected. Methane has roughly 80 times more warming power than carbon dioxide in the near-term. With the planet rapidly approaching 1.5 degrees Celsius above pre-industrial levels, scientists have warned atmospheric methane needs to be slashed quickly.

The latest figures come just days after the UN Intergovernmental Panel on Climate Change released a report describing how the world should address the climate crisis. The panel reported that, as the world barrels toward levels of global warming that will have irreversible impacts, there are economically viable solutions already out there including curbing methane emissions — the fastest way to turn down the heat.

The concentration of methane in the atmosphere is higher now than any time in at least 800,000 years, according the IPCC.

Methane, the main component of the natural gas we use to heat our homes and cook, can leak from oil and gas drilling and the pipelines that transport those fossil fuels. It also comes from landfills and agricultural practices — and even from flatulent cows.

Scientists at Stanford University reported in March that oil and gas operations in southeast New Mexico are leaking an alarming 194 metric tons of methane per hour into the atmosphere. That is more than six times what the Environmental Protection Agency has estimated.

Climate experts see methane as a quick win. If the world stopped emitting carbon dioxide (CO2) tomorrow, global temperatures wouldn't begin to cool for many years because of how long the gas stays in the atmosphere. Methane, on the other hand, has a large warming impact for about nine years, said Xin Lan, a research scientist working at the University of Colorado, Boulder, and NOAA's Global Monitoring Laboratory.

"That means if we reduce methane emissions now, we should be able to see the atmosphere levels coming down rather quickly in a few years," she said. "That's slightly different than CO2, which stays in the atmosphere for thousands of years, so it takes a lot more efforts to do the reduction."

"And because CO2 has such a long lifetime, once it's released in the atmosphere, the impact is quiet long lasting," Lan added.

"We must address both," Jackson told CNN. "Methane action won't do the job on its own, but is critical for delaying warming in the short-term. Carbon dioxide is still the most important greenhouse gas long-term."

Jackson noted that, because natural gas powers so much of our daily lives, cities and states would do well to prioritize electrifying new construction to avoid locking in the use of natural gas for decades more. He also said that there should be a cost for polluting methane.

"We have even fewer mechanisms for pricing methane pollution than for carbon dioxide in the United States," Jackson said. "We need to expand carbon removal incentives to include methane removal."

Rick Duke, the US Deputy Special Envoy for Climate, said the Biden administration wants to see more policies to regulate methane emissions from oil and gas — and that addressing methane is a major priority.

President Joe Biden targeted methane emissions in November when he announced a new rule that would push oil and gas companies to more accurately detect, monitor and repair methane leaks from new and existing wells, pipelines and other equipment.

Biden, alongside EU President Ursula von der Leyen, also launched the Global Methane Pledge last year, which aims to slash global methane emissions by nearly 30% by the end of the decade. More than 100 countries have signed that pledge.