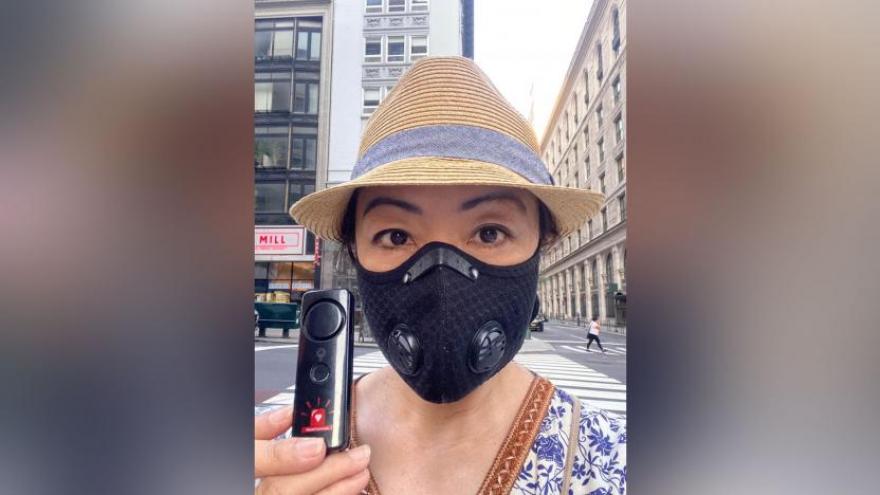 Stella Au, 57, says she experienced scary situations on the New York City subway system because of her race. She also carries a personal alarm to feel safer.

(CNN) -- A New York City anti-hate group is distributing personal safety alarms to Asian Americans and immigrants to protect them from a recent surge of racially motivated violence.

Safe From Hate has donated 3,000 handheld alarms that emit an extremely loud noise to shock and disorient attackers while calling attention from bystanders and law enforcement officials.

With its donations, the group aims to thwart anti-Asian violence, which has risen drastically across the United States in recent months. The Asian American community was again targeted on Tuesday, when a shooting spree in the Atlanta area killed eight people, including six Asian women. An investigation into the shooter's motive is still pending.

"Asian Americans are enraged that this is happening. We are Americans who belong here. This is our home. And we should not be scapegoats," Barbara Yau, co-founder of Safe From Hate, told CNN, referencing the misplaced blame for the coronavirus pandemic that some Asian Americans have faced. "We hope these alarms will give the most vulnerable a sense of security as they go out in public."

Yau started Safe From Hate with her lifelong friend Gilbert Chan last summer, after the US saw a rise in anti-Asian hate incidents with the start of the pandemic.

The group gives alarms to individuals and donates them to community groups for distribution. It focuses on seniors and victims of harassment or violence.

"Many Asians seniors are now scared to go outside to shop or even take a stroll on the street," Yau said. "This is not okay. They have earned the right as our elders and as Americans to enjoy freedom from being attacked in their own country just because the ignorant want someone to blame."

Earlier this month, the group donated 200 alarms to Concerned AsAm Citizens of NYC (CAACNYC), a grassroots group that spreads awareness of anti-Asian hate.

"We are all very angry right now, just constantly internally screaming. We just want to be recognized," Ng told CNN. "These alarms are a way to make our community members feel safe, and whatever we can do for them we will."

Mei-Ying Jan, 70, is one of the thousands of people to receive an alarm from Safe From Hate.

"As an older Asian woman, I feel very helpless because it seems like no one is helping us," Jan, who is from Taiwan but lives in Queens, New York, told CNN. "Just being able to feel the alarm in my pocket makes me feel more secure."

Stella Au, 57, says she experienced scary situations on the New York City subway system because of her race. She also carries a personal alarm to feel safer.

"I was walking to the subway in Chinatown and this man tried to get my attention," Au told CNN. "He tried to grab me. I heard him say something about 'Chinese.' I felt trapped by that man and thought I was a target because of my race."

After the incident, Au said she didn't feel safe living alone until attending an anti-hate march, where someone from Safe From Hate gave her a handheld alarm.

"I got the alarm after this incident and I carry it with me whenever I go outside," Au said. "Recently, with the spike in all the hate crimes all over the country, I have started carrying the alarm again. I feel I need to keep my eyes open when I'm outside because all Asians are targets, potential targets anyway."

After the killings in Atlanta on Tuesday, Safe From Hate experienced an increase in demand for alarms, Yau said.

The group is entirely self funded, with Yau and Chan footing the bill for the alarms. No matter the costs, Yau said the pair won't sit back and watch the Asian American community be victimized.

"Our Asian communities need protection, and if our government is not protecting us, we will work on finding ways to protect ourselves," she said.