This European airline just ordered a fleet of airships 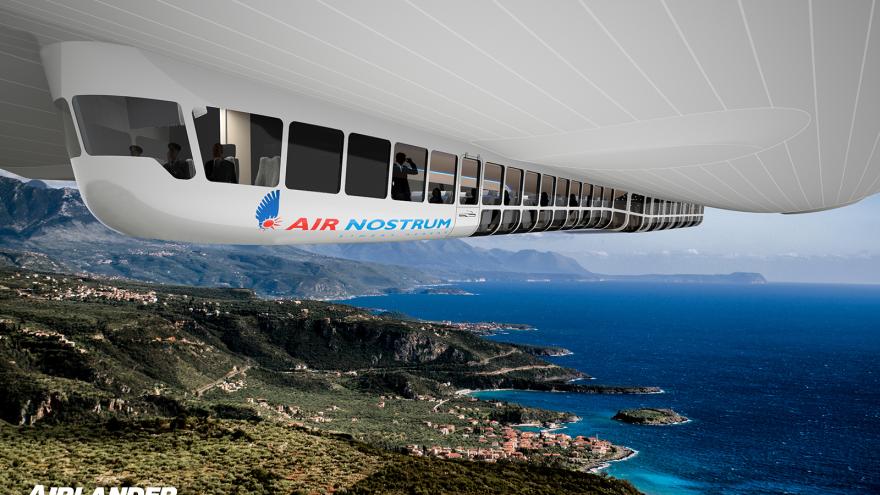 (CNN) -- As the quest for less environmentally damaging aviation continues, one Spanish airline has thrown its hat into the ring by ordering new hybrid airships -- which pack as much of a punch visually as they are said to do environmentally.

Air Nostrum, which operates flights under the Iberia Regional umbrella from its Valencia base, has ordered 10 Airlander 10 aircraft, with delivery scheduled for 2026.

Previously, its manufacturers had predicted the aircraft -- which was unveiled in 2016 -- would be in service by 2025.

Made by UK-based Hybrid Air Vehicles (HAV), the hybrid airships could cut emissions by 90%, according to the company.

Held aloft by helium and powered electricity, they will seat 100 passengers, and typically fly 300-400 kilometers (186-249 miles), according to the manufacturer. Don't expect a lightning-fast flight, however -- the maximum speed will be 80 mph (129 kph).

The deal follows six months of "rigorous studies and modeling" of internal Spanish routes, according to the manufacturer.

HAV says that in future, potential short-range routes for the aircraft could include Liverpool to Belfast (168 miles), Seattle to Vancouver (127 miles), and Oslo to Stockholm (263 miles). The aircraft can make point-to-point journeys, since it doesn't need an airport runway to land -- waterfronts, greenfield sites and underutilized airports have all been earmarked by HAV.

The interiors are rather more glamorous than typical airplane cabins, with a 1-2-1 configuration, some seats facing each other with, and transparent walls giving views of the countryside below. For those who like to see where they're going, it will fly at a maximum of 20,000 feet.

Air Nostrum President Carlos Bertomeu said the airships will help his company toward European Union "Fit for 55" goals of cutting emissions by at least 55% by 2030.

"The Airlander 10 will drastically reduce emissions and for that reason we have made this agreement with HAV," he said in a statement. "Sustainability... is already a non-negotiable fact in the daily operations of commercial aviation.

"Agreements such as these are a very effective way to reach the de-carbonization targets contemplated in the Fit for 55 legislative initiative."

HAV CEO Tom Grundy added: "As countries like France, Denmark, Norway, Spain and the UK begin to put in place ambitious mandates for the decarbonization of domestic and short haul flight, Hybrid Air Vehicles and Air Nostrum Group are demonstrating how we can get there -- and get there soon.

HAV will start building the fleet this year, creating 1,800 jobs in Yorkshire, UK.

The company said that that it was working on "further developments in electric propulsion," and hope that the Airlander 10 will become the first large scale aircraft to achieve zero-emissions flight.