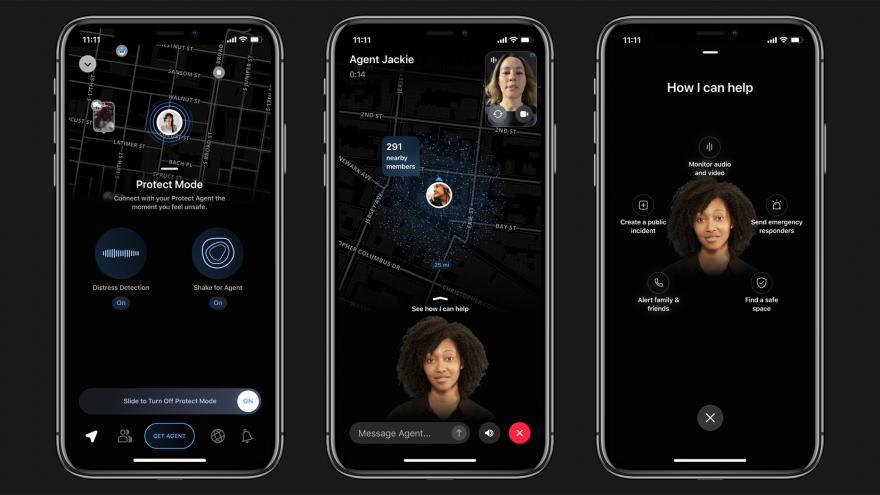 (CNN) -- Next time you're walking alone at night or meeting up with a stranger for a first date, one startup would like to listen in -- with the goal of protecting you.

For $19.99 a month, a subscriber can connect 24/7 with Protect agents through the Citizen app by text or video chat -- or by shaking their phone or screaming, if those functions are enabled via "Protect Mode," a feature currently only available on iOS.

Protect agents can then escalate a situation to 911, or a person's emergency contacts. They can also help with a variety of other scenarios, Citizen said, such as guiding a person to a nearby cooling station during a heat wave, monitoring someone on a first date or an evening stroll for peace of mind, or issuing an alert about a missing loved one or pet, among other use cases. (These agents are employees, according to Citizen. It declined to say how many it has on staff.)

"Citizen is now a two-way system with the launch of Protect. When you need help, you can actually use Citizen to get that help," said Citizen CEO Andrew Frame in an interview last week against a Zoom background that included the words: "Making your world a safer place."

"I find it just fascinating that when you want a burrito, there's 10 different apps on your phone that can get you that burrito as quickly as possible," Frame said. "When somebody is breaking into your house or you need help, you're forced to rely on a 911 system that was really built in the 1960s."

While Citizen is positioning Protect as complementary and supplementary to existing public emergency response systems, the startup hasn't always stayed in its lane, or been clear in its execution. Citizen originally launched in 2016 as "Vigilante" but was quickly removed from the Apple App Store after it was criticized by law enforcement for encouraging people to rush toward crime scenes to document them. In 2017, it relaunched as Citizen and played down the role of civilians in finding and reporting incidents. But it has continued to court controversy.

In May, for example, Citizen offered a $30,000 reward for information that led to the arrest of an alleged arson suspect, but later said it identified the person by mistake. The company used a new product in its app called OnAir to broadcast the information, but said it failed to follow its own verification protocols before circulating the information.

Shortly after, Citizen confirmed it had been testing an on-demand security force with some of its employees after Vice News first reported on a company branded patrol car in Los Angeles. The company said that, while its pilot program had ended and it would not launch its own private security force in the future, it wouldn'trule out partnerships with other companies that would accomplish the same thing.

(Frame said that, despite recent headlines, there was zero hesitation in moving forward with its latest offering. "We've always had conviction in the need for Protect. There's been no press that has ever dictated any of our product development plans," he said.)

As CNN Business previously reported, the company has been trialing Protect internally since last summer. Citizen said more than 100,000 people have tested the product and, according to a Citizen spokesperson, it has "received positive encouragement from police departments and Public Safety Answering Point (PSAP), or 911 call centers, in cities where Citizen is currently available."

However, Frame acknowledged that there are times when Protect shouldn't be the first line of defense. "There might be a particular situation where you should just call 911 directly," while noting that "911 doesn't help with a lot of situations."

"It's basically like: 'Has a crime occurred? Then call 911,'" said Frame. "There's so many more situations that your Protect agent can help you with."

Citizen Protect is available anywhere, according to the company, not just in the roughly 60 cities where the company offers real-time crime alerts.

When asked about whether the company worked with first responders, or consulted with experts on Protect, Frame said, "We've talked extensively to experts on this and we consult with them regularly." When asked if he could name any of the experts or firms involved, he said, "On the board of directors is the Former Police Commissioner of the New York City Police Department, [William] Bratton."

While some outside observers have expressed concerns about the company sending potentially anxiety-inducing messages about crimes and then upselling users on security, Frame rejected the idea of any potential conflicts.

In an emailed statement, Frame said: "anyone who reaches that conclusion is unfamiliar with how Citizen works. Our north star has always been to bring transparency to the 911 system, and we measure success based on people helped through our technology."