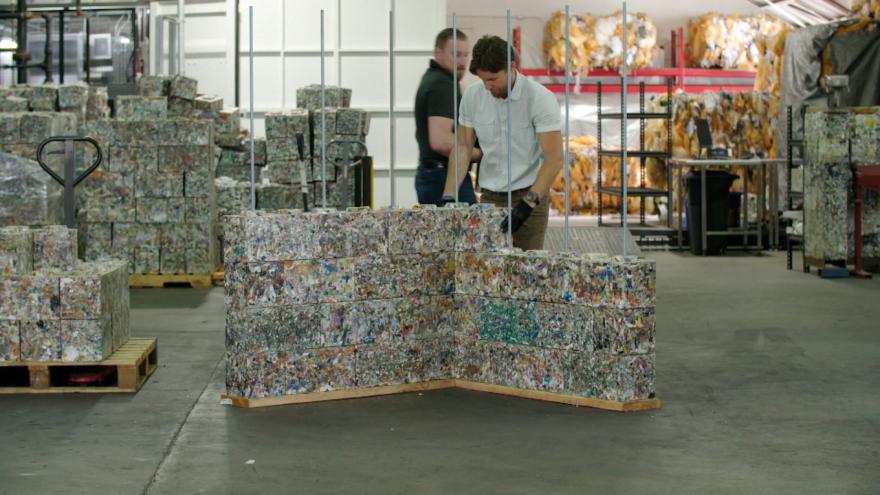 (CNN) -- Imagine taking heaps and heaps of earth-polluting, unusable plastic waste and actually transforming it into something constructive?

Plastic pollution is a proliferating and increasingly overwhelming problem. By 2040, estimates indicate that as much as 710 million tons of solid plastic waste will clog up the earth's ecosystem, in oceans, rivers and on land.

Los Angeles-based startup ByFusion has a plan for that waste. In fact, the business has created a system to collect the most troublesome type of plastic trash — the stuff that can't be recycled.

Founded in 2017, the company has developed a machine that turns single-use plastics into something called "ByBlock." Similar in size and shape to the concrete blocks commonly used in construction, ByBlocks are made entirely of reclaimed plastic waste.

"You'd be astounded at the things that cannot be recycled, which is basically everything you touch ... stuff like pens, toothbrushes," ByFusion's CEO, Heidi Kujawa, told CNN Business. "The interesting thing about our technology is we specifically, entirely designed our system around the low value, no value stuff, everything that can't be recycled."

As she researched plastic waste, Kujawa learned that there are seven types of plastic, of which only two can be recycled. "In the past it used to go to China and other places that would buy it from us," she said. "That dried up in 2017. Since then, we've been burning or burying that plastic."

ByFusion's machine, called the Blocker System, converts the discarded waste into building blocks without having to sort or pre-wash them, a major obstacle in the plastic recycling process.

After collecting the waste, it takes only minutes to shred the plastic is shredded and fuse it into solid blocks using steam and compression. The blocks are made without additives or fillers — 22 pounds of plastic create 22 pounds of ByBlock bricks.

A cement block has rebar running through it, but ByBlocks uses a method called post tensioning, which requires a steel rod. As a sustainable option for building material, the repurposed plastic can be used for commercial, residential and infrastructure projects, Kujawa said .

To that end, the business wants to partner with local governments, municipalities and corporations among other entities. It's already selling both its Blocker System and completed ByBlocks but declined to specify customers or sales numbers thus far.

"From the very beginning, we knew we wanted to be as carbon neutral as possible. So our block, our systems and our manufacturing process is an all electric, no emissions process today," Kujawa said.

The ultimate goal, she said, is to take the Blocker System to communities worldwide and enable them to repurpose plastic waste for use in local building projects.ByFusion hopes to be able to recycle 100 million tons of plastic by 2030.

"Every community struggles with plastic waste," Kujawa said. "Putting in a Blocker [System] is going to help reduce landfill, reduce greenhouse gas emissions, reduce transportation needs, all of that other good stuff."