This city disbanded its police department 7 years ago. Here's what happened next 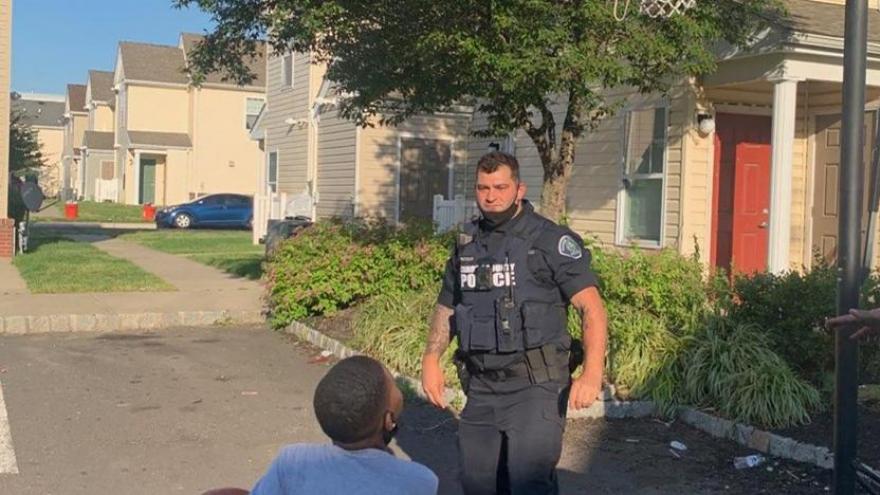 A Camden County officer plays basketball with a young resident.

It's not the first locale to break up a department, but no cities as populous have ever attempted it. Minneapolis City Council members haven't specified what or who will replace it if the department disbands.

Camden, New Jersey, may be the closest thing to a case study they can get.

The city, home to a population about 17% of Minneapolis' size, dissolved its police department in 2012 and replaced it with an entirely new one after corruption rendered the existing agency unfixable.

Before its police reforms, Camden was routinely named one of the most violent cities in the US.

Now, seven years after the old department was booted (though around 100 officers were rehired), the city's crime has dropped by close to half. Officers host outdoor parties for residents and knock on doors to introduce themselves. It's a radically different Camden than it was even a decade ago. Here's how they did it.

A city's decision to dissolve its police department is often a matter of money -- and the cities that chose to do so are often quite small. Camden comes closest to Minneapolis in its size and history of misconduct.

Earlier this year, the village of Deposit, New York, dissolved its department because it cost $200,000 per year. Now, a single sheriff's deputy is assigned to the village, CNN affiliate WICZ reported. Garden City, Missouri, laid off all of its officers and suspended its police chief because, as its mayor said in 2018, the city couldn't afford to keep them employed.

In a bizarre move, Rio Vista police leadership abruptly left the department, and half of the remaining officers left for other jobs, so the California city's department could no longer go on, CNN affiliate KCRA reported in January.

Camden dissolved its police department to root out corruption.

The city's crime rate was among the worst in the US. Within nine square miles and among nearly 75,000 residents, there were over 170 open-air drug markets reported in 2013, county officials told CNN. Violent crime abounded. Police corruption was at the core.

Lawsuits filed against the department uncovered that officers routinely planted evidence on suspects, fabricated reports and committed perjury. After the corruption was exposed, courts overturned the convictions of 88 people, the ACLU reported in 2013.

So in 2012, officials voted to completely disband the department -- it was beyond reform.

And in 2013, the Camden County Police Department officially began its tenure. No other city of Camden's size has done anything quite like it.

How the new Camden police changed its approach

Louis Cappelli, Camden County freeholder director (another term for a county-level public official), said the department still has a ways to go, but its efforts over the last seven years have been largely successful.

"Back then residents of Camden city absolutely feared the police department and members of the department," he told CNN. "They (the residents) wanted that to change."

Violent crimes have dropped 42% in seven years, according to city crime data provided by the department. The crime rate has dropped from 79 per 1,000 to 44 per 1,000, the data shows.

Cappelli credits the improvement to new "community-oriented policing," which prizes partnership and problem-solving over violence and punishment.

It starts from an officer's first day: When a new recruit joins the force, they're required to knock on the doors of homes in the neighborhood they're assigned to patrol, he said. They introduce themselves and ask neighbors what needs improving.

Training emphasizes deescalation, he said, and the department's use of force policy makes clear that deadly force is the last option.

Now, police host pop-up barbecues and pull up in Mister Softee trucks to get to know residents, Cappelli said. They host drive-in movie nights -- recently, the movie of choice was "The Lion King" -- along what used to be known as the city's "Heroin Highway."

The community-first initiative has made improving diversity within the force a priority, too. Whites are the minority in Camden, so Cappelli said the new department has hired more black and brown officers to serve black and brown residents. (Cappelli didn't have exact numbers for the increase, but said it's improved.)

Cappelli said the new department also hired over 100 officers who previously served the dissolved Camden Police Department. They joined the department, which now employs over 400.

"We want to make sure residents of the city know these streets are theirs," he said. "They need to claim these streets as their own, not let drug dealers and criminals claim them."

What Minneapolis can learn from criticism of Camden

The criticisms lodged at Camden, though, may inform how Minneapolis goes about its restructuring.

Ojii BaBa Madi, a lifelong resident of Camden and Justice Minister at Asbury Community Church, said he's felt no improvement in his relationship with police because many of the new officers don't live in Camden or know the community well.

Additionally, the department's racial makeup isn't entirely reflective of the city it serves, he told CNN in an email.

"The demographics of the city do not reflect these demographics," he said. "With a white chief, as thoughtful and progressive as he is, and only one African American captain out of seven, both the dynamics and optics of race are a problem."

What has improved, he said, is officers' willingness to have a "productive dialogue" between police and community leaders like him. And the city "does feel much safer at the neighborhood level" since police started shuttering open-air drug markets.

As for abolishing police entirely, Ojii said the city is "far away from any practical de-policed reality" partly because of the crime that still exists there.

"I would prefer to nail some best practices for policing as it should be," he said, as the city -- and society -- figures out how to change law enforcement as it exists now.

Nyeema Watson, also a lifelong Camden resident who's the associate chancellor for civic engagement at Rutgers University -- Camden, said she thinks the restructuring has had a largely positive impact. Officers are more visible now, and they're building trust and welcoming feedback.

Watson and Ojii agreed the city's problems remain unsolved. Those require more work than a shift in law enforcement alone can provide.

"We can't police our way out of social issues, unemployment, disproportionate health issues, economic challenges -- these are things that drive crime," Watson said.

When the city improves access to education for its residents, they'll better understand systemic racism within law enforcement and how to dismantle it, she said.

"There are so many issues in our city, outside of policing, that promote a constant level of tension," Ojii said, naming gentrification, poverty and addiction among them. "In essence, Camden remains a tale of two cities."