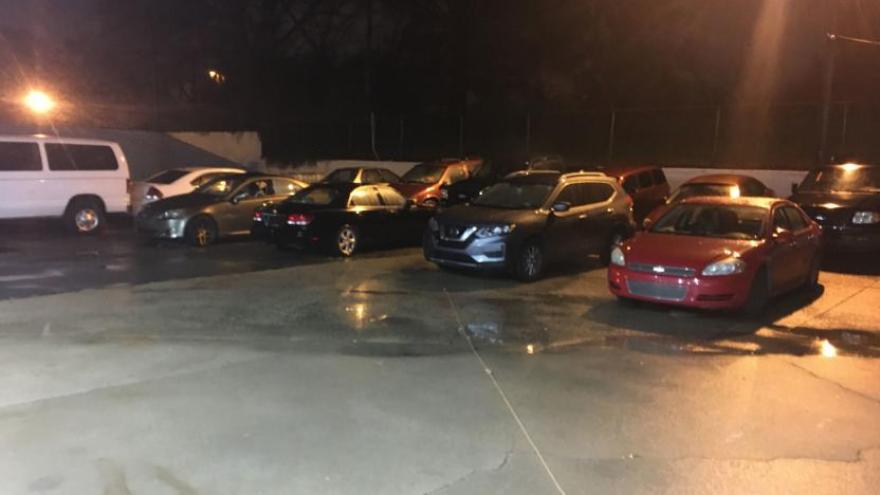 Just like any other used-car dealership, during the day, Kiplin Automotive Group sells cars. But as night falls and others return home, Kiplin Auto's manager James Charles turns on the lights and transforms the dealership into a haven for those who are homeless and living in their cars.

(CNN) -- Just like any other used-car dealership, during the day, Kiplin Automotive Group sells cars. But as night falls and others return home, Kiplin Auto's manager James Charles turns on the lights and transforms the dealership into a haven for those who are homeless and living in their cars.

With its well-lit lot, security cameras and welcome invitation, the car dealership in Charlotte, North Carolina, offers homeless men, women and families a safe place to park and spend the night without worrying about whether they're breaking the law or trespassing.

That peace of mind means everything to those living in their car, according to Davina Stephens, who has lived in her car on and off for the past eight months.

Stephens, 46, currently works at a bank call center, but when she accepted the job, she was let go at her previous job three weeks too soon.

"Weeks of no income set me back," Stephens told CNN. "It's hard to dig yourself out of a hole when you don't have savings and things like that."

She was eventually evicted and although she tried to make some cash by giving people rides, she had no choice but to live in her 2012 Chevrolet Impala.

At night, Stephens would pull into the parking lots of fast-food restaurants, gas stations and apartment complexes that were under construction. She would try to sleep but would often be awakened by the blinding flashlights of security guards who told her to move along.

But a few weeks ago, Stephens was scrolling through Facebook and saw a post by Charles that said he was offering his dealership as a "safe place to park at night."

"We know that some families are struggling and in a tough situation. Yea whole families sleeping in the car... We will provide a safe place to park at night. As this service to the community develops we will look to help these families in other ways but right now a safe place is what we can offer," Charles' post read.

Stephens headed there immediately, mostly out of curiosity, she said. But when she saw that it was real, a huge burden was lifted off of her.

"It's soothing that you can close your eyes and not worry that you have to open them 15 minutes later. It takes your headache away," Stephens said.

Since Charles' post went up on January 23, about 20 families, men and women have parked their cars in his lot. Some stay for just one night, and others come back every night for weeks.

But in each encounter Charles has with his guests, he said, his heart goes out to them because he also was in a similar situation with his wife and six children a few years ago.

"In 2015, we were homeless, I'd like to say displaced, for 90 days," Charles told CNN. "We didn't have a place to live because (the owner) sold the house we were renting and we were unaware that it was being sold."

"We were living in hotels. We were very close to staying at my own dealership a couple of nights because we could not find a hotel that was available... It was a tough time, a tough experience," Charles added.

As word spread about Kiplin Auto and the work Charles was doing, donations of hats, coats, blankets and even a port-a-potty came in.

But when donations of money started arriving, Charles knew that he could offer these people more than just a place to park overnight.

So last month, he and his family started their own nonprofit organization called HALO Now and a GoFundMe, which has currently raised more than $16,000. Charles will use the money to pay the security deposit and first month's rent to help those living in their car get back into apartments.

"As long as people are willing to give to the GoFundMe, we will use that money to help whoever stays with us to find a place," Charles said, noting that he will donate $200 himself for every car his dealership sells. His goal is to help 100 homeless families this year.

Stephens, who will be one of the first to have her security deposit and first month's rent paid with Charles' help, said she cried when he first told her the good news.

"It means so much. It means I can be focused and be comfortable," Stephens said.

"When your own family turns their backs on you, you think there's nobody good out there," Stephens said. "But when Mr. James Charles and his family helped me, it was a godsend."