This California teen started a nonprofit to help kids learn about science. He just got accepted into Stanford 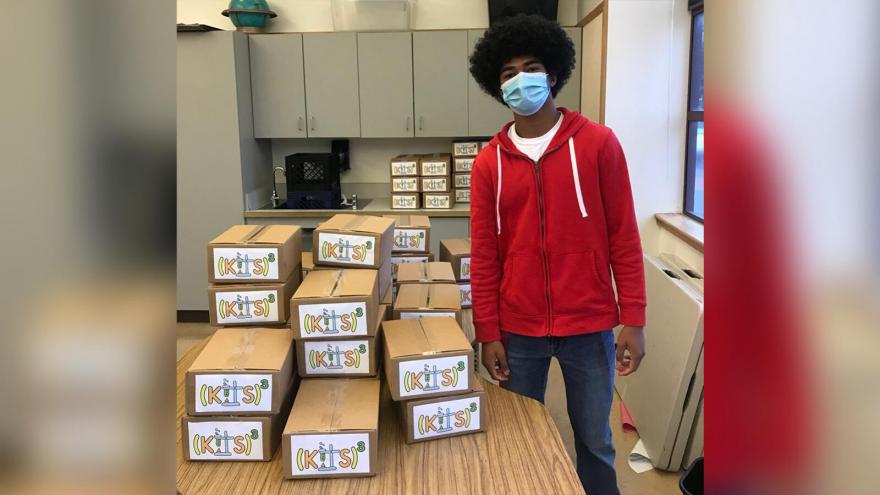 Ahmed Muhammad with some of the Kits Cubed science kits

(CNN) -- Every year, high school seniors anxiously wait for college admissions letters, hoping they get accepted into their dream schools. Ahmed Muhammad was one of them.

So when Muhammad got accepted into Stanford University, he was delighted. "It was a dream come true," Muhammad told CNN. "It still doesn't feel real."

He will become a first-generation college student.

Over the course of his high school career at Oakland Technical, the California native has taken nine college classes on top of his high school workload -- no small feat for a senior who not only tutors students and plays as point guard for his school's varsity basketball team, but also runs a nonprofit that designs science kits for kids.

The nonprofit, Kits Cubed, became the main focus of his personal statement for Stanford University.

The inspiration for Kits Cubed was Muhammad's own family.

He was babysitting his niece and nephew when he decided that the activity of choice for the day would be a science experiment.

Almost immediately, Muhammad was met with resistance. His nephew told him outright that he hated science because he was bad at it. "He literally loved everything, and then when I brought up science, he doubted himself," Muhammad said of his nephew. "He didn't believe in himself anymore."

Muhammad was not going to let his nephew's self-doubt continue, so he decided to use simple science experiments to convince him, as well as his niece, that he was not bad at science.

"We went to the store together and I had them pick out potatoes, and then I went to the hardware store to buy some copper nails, some galvanized nails and some wire and we made a battery out of it," he said.

In the end, Muhammad was successful in convincing his nephew that he was not bad at science. "He actually likes science now," he said.

In late March, Muhammad was taking virtual classes and sheltering-in-place when he started Kits Cubed.

He wanted kids to get hands-on experience with science -- especially during a time when a global pandemic had forced distanced learning.

"What got me into science was those early hands-on activities," he explained. "I know that in schools, especially in our school systems, that's not always there.

The experiments Muhammad conducted served as a launching point. He approached his teachers with the idea, and they helped him design science kits geared toward elementary school students. The goal was to create experiments that explored real science concepts with simple everyday materials.

"I want kids to know that science is all around us, it doesn't need to be in a super fancy lab, with millions of dollars of equipment," he said. "It can be with the battery that you find in your smoke detector, or in the leaves of the trees outside, or in a potato."

So far, Kits Cubed sells three kits, with three experiments in each kit: an original experiment set complete with a plant maze, pop rocket, and a kaleidoscope; a classic science bundle that includes a rock candy experiment, a catapult and instructions on how to make a potato battery; and an electricity and magnetism kit that comes with the steps to creating an electromagnet, a telegraph and an electric motor.

Each kit sells for $15 and comes with a manual on how to conduct the experiments.

Not long after he started developing Kits Cubed, Muhammad was joined by his close friend, Elias Berrick and the pair started working from Muhammad's room.

They spread the word about Kits Cubed through door-knocking efforts, flyers and NextDoor, a neighborhood social networking site. Muhammad also designed the logo for Kits Cubed and launched the website.

"We've been fortunate to be able to provide them with support," Ken Berrick told CNN. "They've done it on their own and they've done an amazing job in helping engage people in science."

According to Muhammad, Kits Cubed has reached more than 2,000 young people in Oakland alone. The nonprofit has also received grants and donations from local organizations such as the San Francisco Foundation as well as support from former NFL star Marshawn Lynch, a fellow Oakland Tech alumnus.

For Muhammad, the most important goal of Kits Cubed is to teach kids that science is always within their reach.