This Bentley is $2 million, roof not included 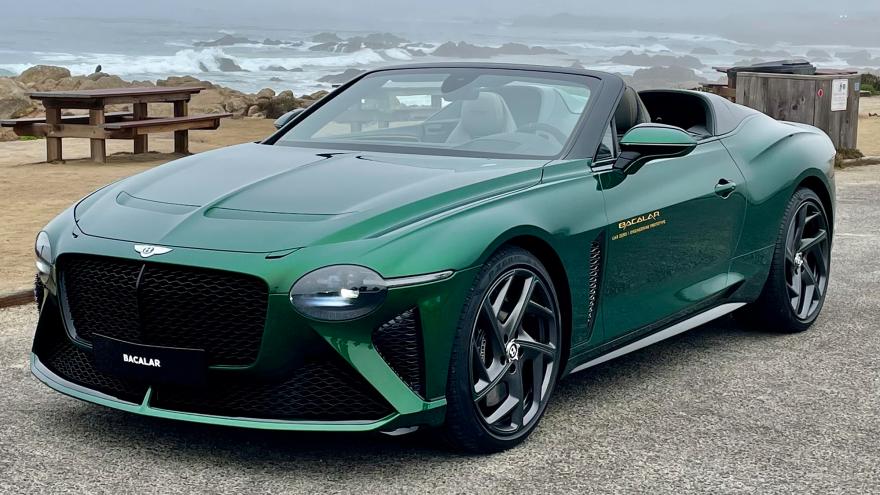 (CNN) -- There was a slight drizzle when I was getting ready to go for a short drive in Bentley's new Bacalar. Ordinarily, this would not be a big deal. The rain was hardly enough to warrant an umbrella. Except the Bentley Bacalar has no roof.

The Bacalar is not a convertible. It really has no roof, not even a folding top.

If owners can't drive their Bacalar in the rain, that's a small matter. You can be assured, people who can afford to buy this $2 million car have other ones they can get wet.

The lack of a roof gave Bentley designers a sort of freedom they rarely get when having to figure out where to hide a folded top and put unsightly latching mechanisms.

"When you don't have a roof, you can make the flow of the cabin go into the contour of the exterior. So this car is very much about the design language," said Bentley spokesman Tim Hannig, who accompanied me on the drive. "And we wanted to create something of extraordinary beauty. Therefore, no roof."

Only a dozen Bacalars will be built. With so few being made, and at that sort of a price, the Bacalar is, essentially, a privately owned concept car. Although, unlike most concept cars, it is road legal.

No one could give an exact price for the Bacalar that I was driving because it was literally, priceless. "Car Zero," as was rather garishly lettered on the side, is the prototype Bacalar, andBentley has no plans to sell it. It had been painted white for testing so any potential cracks or flaws in the body would show more easily, and had only recently been repainted a deep ocean green.

The all-wheel-drive Bacalar has a turbocharged 650-horsepower 12-cylinder engine, but it is not intended to be a street-shredding high-performance sports car. Customers who want that sort of thing can shop at Bentley's sister-brand Lamborghini. (Both are owned by the Volkswagen Group.)

With its smooth ride, comfortable seats and ample trunk space, the Bacalar is designed to be the sort of car one might driveeveryday, even though one probably will not.

Performance was not entirely left out of engineering considerations, of course. Even though its body is wholly different, the Bacalar shares much of its basic parts with a Bentley Continental GT, specifically the high performance GTC Speed model. But the Bacalar isa couple of hundred pounds lighter, thanks to a body that's made mostly out of expensive carbon fiber. Dispensing with the roof and backseats also saved weight. All of this has also helped lower the car's center of gravity, which improves handling around curves. At about about 5,300 pounds, it's not exactly lithe, though, weighing more than a full-size Mercedes luxury sedan.

Hannig told me about the car ashe drove us out to a roadside overlook by the Pacific Ocean. Fortunately, while heavy clouds remained, the rain had stopped. And, for good measure, he pressed the gas pedal hard a few times, eliciting brutal acceleration and a sonorous rumble from the huge engine.

While I waited for my chance to drive, I familiarized myself with the Bacalar's unique interior. The wood trim comes from a tree that fell 5,000 years ago into a wetland and was preserved there in a process that also stained it nearly black. Bentley left the color alone. The analog clock in the center of the dashboard is light blue, the hue of Lake Bacalar in Mexico's Yucatán Peninsula. Its water is famous for its shimmering color.

The Bacalar has a three-sided rotating panel in the dashboard, a feature also available in other Bentley models, including the Continental GT. One side is "blank," looking like the rest of the dashboard. But at the press of a button, the panelcan flip around to show three old-fashioned dials, including a compass. Flip the panel again and it shows a digital display screen of the sort nearly every car has these days. There you can see a navigation map, select a song to play and do all the sorts of things drivers do with screens.

About the only other interior piece the Bacalar shares with the Bentley Continental GT is a panel of switches near the gear selector. It's largely because of that panel that the Bacalar, open to the world as it is, has air conditioning. According to Hannig, it just seemed better to keep the futile feature than to redesign the switch panel and remove the buttons.

The emphasis on design also means the Bacalar does not have a backup camera, even though there is a screen in the dashboard.Adding that feature would require a camera lens that, designers felt, would put an unsightly glass pimple on the car's beautifully designed rear end. Fortunately, thanks to its four-wheel steering, the Bacalar was easily able to make a U-turn so I could pull out out of the overlook's small parking lot.

The Bacalar isn't immediately eye-catching from the outside. To most people, it would probably register as "a nice Bentley." Look just a moment longer and you notice the way the headlights are stretched around the front corners. You might also notice the way the hood scoops or the overall proportions of the car. The Bacalar is low and muscular, with bulges rising behind each seat. As it drives past, you would definitely notice that the back end splits into layers like a flower bud opening up.

From the driver's seat, the Bacalar feels like a quintessential Bentley. Strong and quick, but comfortable. The steering has a nice feel and feedback to it and the engine provides ample and nice sounding power.

But Bacalar customers aren't paying for performance. They're paying for the unique design of the car, which gives them something they can call all their own. All 12 Bacalar production cars have now been designed to each customer's particular tastes, Hannig told me.

"Every car has its absolute own personality," he said.

Even with its hefty price, a car like this could hold its value reasonably well due to its extreme rarity, said Donald Osborne, chief executive of Audrain LLC and a collector, car appraiser. The fact that it has no roof at all could limit its appeal for some, though, he said.

There are other cars on which one could spend this sort of money and get absurd levels of speed and power that the vast majority of owners will never come close to being able to enjoy. The Bacalar just offers its beauty and its uniqueness. It is also quite nice to drive on a pleasant day by the sea. It may be a bit impractical, but it's nice when a very expensive car offers such accessible pleasures.