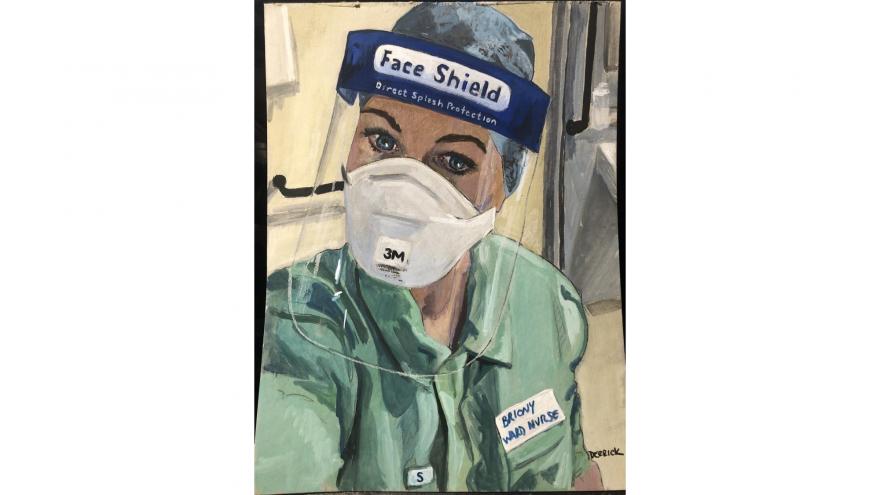 Briony Lusted works as a nurse at Cheltenham General Hospital In Gloucestershire, England.

(CNN) -- When the pandemic forced artist and video game developer Steve Derrick to work from home, he found himself with extra time on his hands that he said he did not want to spend watching Netflix or Hulu. When he stumbled on a magazine photo of a nurse who had just spent a long shift treating Covid-19 patients, he decided to paint her with marks from her PPE and all. This led him to paint more than 100 portraits of frontline medical workers and send the paintings to his subjects, free of charge.

Derrick, 54, told CNN that after painting that first portrait, he felt inspired and began using Instagram to reach out to nurses who posted photos after their shifts treating Covid-19 patients. As word spread, medical workers started sending him photos, and so did their friends and family members who wanted to honor their hard work.

"The great thing about it is they send in pictures that are not your cute selfies that you would usually expect from Facebook," he said. "These are real, real experiences people had."

He sends the paintings to his subjects to show his gratitude. Even though Covid-19 makes it nearly impossible to meet any of them in person, Derrick said their responses keep him going.

"I saw who they are and so I sent the pictures to the people and said, 'Hey, here's a thank you,' and the reaction I got was, 'This is amazing, it's documenting a time in history.'"

Derrick said he would snap a picture of the portrait before putting it in the mail. The project exploded when he started publishing the paintings on social media. He began receiving photos of frontline medical workers from around the world. Friends and family members would send him photos of doctors and nurses to paint. He even received photos from patients who wanted to honor the doctors who helped save their lives.

Derrick said the requests for portraits seemed to follow the spread of the pandemic.

"Some of the requests started coming from Italy, then from Italy to the UK, then from the UK to Spain, from Spain to New York, then from New York gradually across the US," he said.

Since early April, Derrick has painted and gifted at least 100 portraits. He said each one takes three to four hours to complete. He still has his 9-5 job but finds time for painting in the mornings and after dinner, and even during his lunch breaks.

Derrick had never shown his artwork in a gallery before. When the Albany Center Gallery in upstate New York asked to hang the portraits, he had a problem: "They had seen a whole big body of work, but I can't show anything because I gave (each portrait) to the person right away."

He got to work and created 20 portraits in two weeks, which was enough to hold the show and continue spreading positivity.

"I'm just one guy painting pictures. So, it's a little overwhelming for me. But I'm really happy that people are getting some good news and some inspiration and that there's light shed on how amazing these people are."