This Arkansas hospital is so short on nurses in this newest Covid-19 surge, it's offering a $25,000 signing bonus 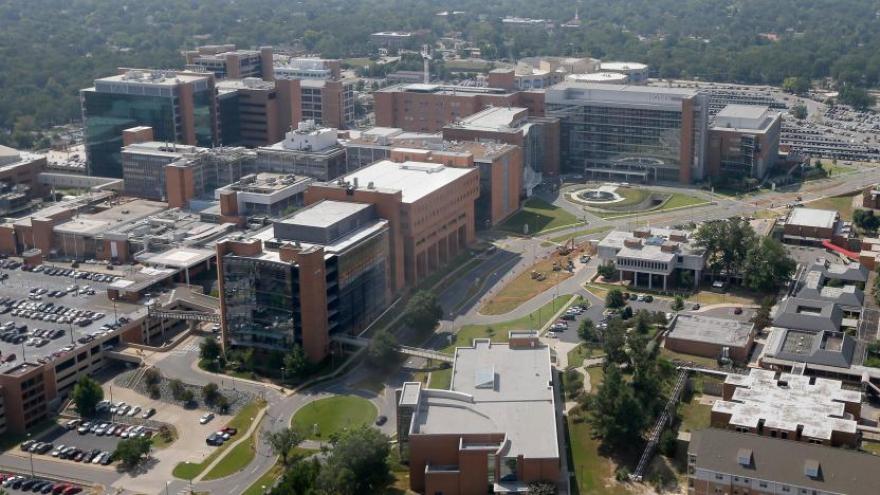 Staffing shortages are affecting morale to the point that some employees are walking off on the job in the middle of their shifts, said Dr. Cam Patterson, UAMS chancellor and pictured, UAMS in Little Rock in 2015.

A registered nurse at a University of Arkansas for Medical Sciences (UAMS) facility in Little Rock, Gardner told CNN she's had to essentially learn nursing on the fly during the Covid-19 pandemic, which she said began eight months into her nursing career.

Not only that, but seeing constant death, working long shifts and having a shortage of health care staff -- specifically nurses -- have left Gardner burnt out.

Burnout and staffing shortages are plaguing Arkansas' health care system in addition to the new Covid-19 Delta variant. Staffing shortages are affecting morale to the point that some employees are walking off on the job in the middle of their shifts, said Dr. Cam Patterson, UAMS chancellor. Others have contemplated retiring early.

UAMS currently has about 360 vacancies for health care providers, including 230 vacancies just for nurses, Patterson said. UAMS is so desperate to find nursing staff that it is willing to pay signing bonuses of as much as $25,000 -- but some medical personnel say it's not about the money, but about their health and mental well-being, and that no amount of money can change that.

"Teams are stretched thin. People are frustrated. People are very tired," Patterson said. "We are down a significant number of positions here, because we just don't have enough nurses that we can recruit to come here and help us to take care of patients."

As the Delta variant ravages communities across the United States, Arkansas averaged more than 1,940 new daily Covid-19 cases over the past week, according to Johns Hopkins University data. As of Wednesday, 1,213 Covid-19 patients were in Arkansas hospitals -- a level not seen since January, according to US Department of Health and Human Services data. And that's way up from the state's 2021 low -- 159 patients on April 3. The state's peak so far this year was 1,316 on January 10, according to HHS.

Greg Thompson, executive director for Metropolitan Emergency Medical Services (MEMS) that provides emergency and non-emergency ambulance service for central Arkansas, told CNN his business has seen a steady increase in calls "almost daily" over the past two months. The number of calls has increased 25-40% some days, he said.

Then when the ambulances arrive to the hospital, there aren't enough beds, causing ambulances to become temporary hospital rooms.

"There's times when we get into the ER and there's just not a bed, so we'll just have to hold the patient on our bed against the wall, waiting on something to clear up so that they can get them off," he said. "Normally we should be able to get out of the hospital in less than 30 minutes. But sometimes we're seeing some extremes of an hour to three hours."

Arkansas had the country's third-highest number of new daily cases per capita across a week as of Tuesday, at 64 new cases a day per 100,000 people, according to Johns Hopkins data. That's below only Louisiana, at 93, and Florida, at 74.

That data came the same day Gov. Asa Hutchinson said he regretted approving a statewide ban on face mask mandates earlier this year. The bill, SB 590, was introduced in late March and eventually passed both chambers of Arkansas' GOP-led General Assembly in April.

Hutchinson has called on the state Legislature into a special session in an effort to amend the law.

"In hindsight, I wish that had not become law," Hutchinson said at a news conference Tuesday. "But it is the law, and the only chance we have is either to amend it or for the courts to say that it has an unconstitutional foundation."

The UAMS health professionals who spoke to CNN said most of the patients they're seeing are not vaccinated and that it pains them not seeing people wear masks in public.

"It does become infuriating. I don't know if I can necessarily be angry at the patient themselves, or to the general public," said Dr. Marc Phan, a UAMS emergency room and intensive care unit physician. "I think we just need to not necessarily ignore that side of it, but embrace them, try to bring them in, and try to tell them the importance of the vaccine and how it can change their life."

Gardner, the UAMS nurse, said she often wonders as she's treating patients why people don't get vaccinated. She said she understands, though, that she has to put her biases aside "because at the end of the day, that's your patient, that's their choice."

"As nurses we have a job to do," she said. "We can't let that dictate how we feel and how we treat them."