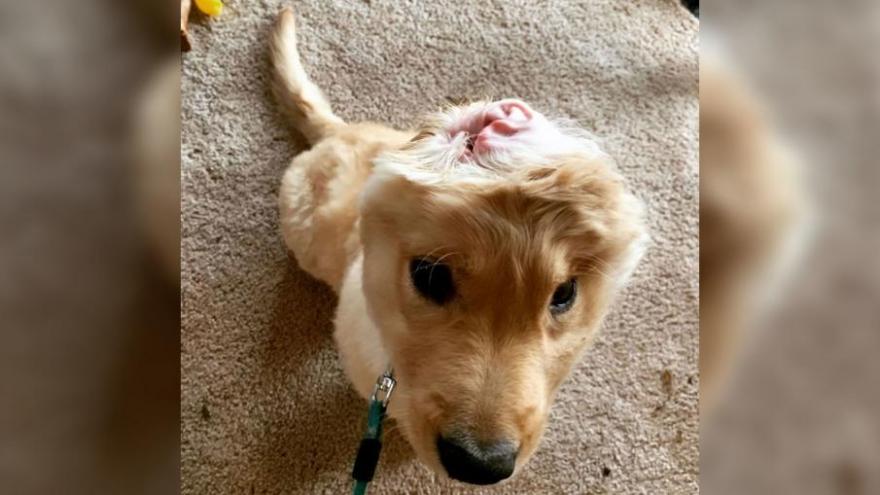 Rae has become a star on social media.

(CNN) -- A "unicorn" puppy has gone from 36 followers to nearly 56,000 on Instagram in only a few short days, and a video of her has been viewed nearly 4 million times on TikTok.

Rae -- or ear spelled backwards -- is a golden retriever with one distinct physical feature: She has one ear that sticks out of the top of her head like a unicorn horn.

Shortly after her birth, she was critically injured and had to be taken to the Family Friends Veterinary Hospital in Grand Rapids, Michigan.

Brianna Vorhees, who is a receptionist at the hospital, was immediately drawn to her.

"Breeders surrender (puppies) to vet techs often if they can't take care of them full-time. I said if a golden retriever ever comes in, I'm going to want to take care of it and raise it. When they found out she'd need 24-hour care, I have a heart for golden retrievers, and I just knew that she was meant for me, essentially."

The breeder isn't sure what happened but suspects that Rae's mother was cleaning off the placenta or amniotic sack and was a little too aggressive. Rae's entire ear was gone and all that was left was the canal with all of the skin peeled off.

Rae had to have major surgery only hours after her birth. The hospital staff wasn't sure if he would make it, but they hoped the surgery would give her a fighting chance.

"She was really in a fragile state, we didn't know if she was even going to survive beyond 48 hours," Vorhees told CNN.

Despite having to undergo emergency surgery and require around-the-clock care after birth, she would go on to make a full recovery with a lone stray ear that sticks out of the top.

"We're assuming because of the sutures is why the ear migrated to the top of her head," Vorhees said. "I think as her skin grew, and she started to grow, that it just kind of migrated up there."

Vorhees' colleagues began to call her unicorn, and her husband thought of the name Rae.

Samantha Smith, a veterinary technician at Family Friends Veterinary Hospital, posted a video of Rae on the social media platform TikTok, which made her a star on social media.

That video currently has 3.8 million views.

Rae turns 12 weeks old today, and Vorhees said that she has no issues with hearing or pain.

"She can hear and plays in day care here at work almost every day," Vorhees said. "She has best friends and is the most confident puppy ever. She's a normal puppy, just with one ear."

Rae gets a lot of weird stares, with people asking what type of breed she is, not realizing that she's a golden retriever. But that doesn't make Vorhees love her any less.

"She was a positive outlet for me," Vorhees said. "I was going through a terrible time with a lot of transitions in my life personally, and Rae was a very positive distraction from a lot of things that were taking place in my life. She's actually the one who saved me. I could focus on her to take care of her to love and get love back, and she was that for me, and kind of that's why she means so much to me."

Vorhees was pregnant with her now 2-year-old son when her dog Loki was diagnosed with lymphoma, and she's happy that her son will be able to grow up with Rae.