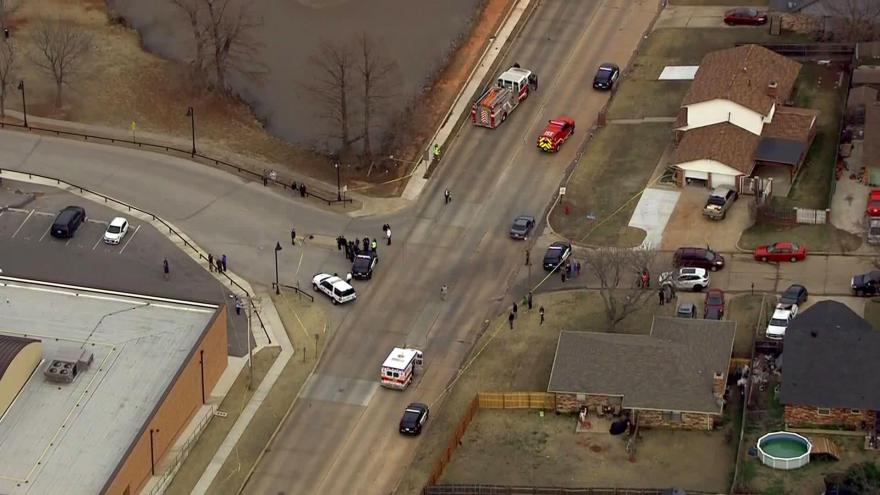 Moore Public Schools confirmed the death of senior Kolby Crum on its Facebook page. Kolby's family released a statement through the school district.

"He finished his race in heaven this morning," the family's statement read.

Superintendent Robert Romines said in a statement that the school district has "united even more" to support the district family. Moore is a city just south of Oklahoma City.

"Kolby has left his legacy with us — that of kindness, strength and inspiration," Romines wrote. "I ask that you also continue to support our students who were injured and are physically recuperating."

The driver of the pickup truck that hit the students, Max Townsend, 57, was arrested about three blocks away immediately after the incident, police said. He is being held in the F. Dewayne Beggs Detention Center in Norman, Oklahoma, on 13 charges, including two charges of manslaughter in the first degree. His bond is set at $1.2 million.

The students were struck around 3:30 p.m. on February 3, and preliminary information indicates they were on a sidewalk at the time, said Moore police Sgt. Jeremy Lewis.

In addition to Crum, two other students that were hit have died:

Freeman intended to sign a collegiate scholarship for cross-country, according to Dustin Horstkoetter, the school district's safety and security director.

The three injured students are:

The younger Townsend's vehicle "struck a vehicle, ended up hitting a telephone pole, flipping over, which is what" killed him, Lewis said.

After hitting the students on February 3, Townsend was arrested about three blocks away, Lewis said.

"There were signs of impairment due to the ... field sobriety test that we gave him, and that was part of the investigation ... and why he was arrested," Police Chief Todd Strickland said last week.

While Townsend faces the 13 charges, they "can and probably will change, especially as conditions change of the victims," Lewis said.

CNN has reached out to the Cleveland County District Attorney's Office to determine if additional charges are being filed, whether Townsend has legal representation and when he will be in court.