Thieves stripped a Canadian vineyard of grapes the night before harvest 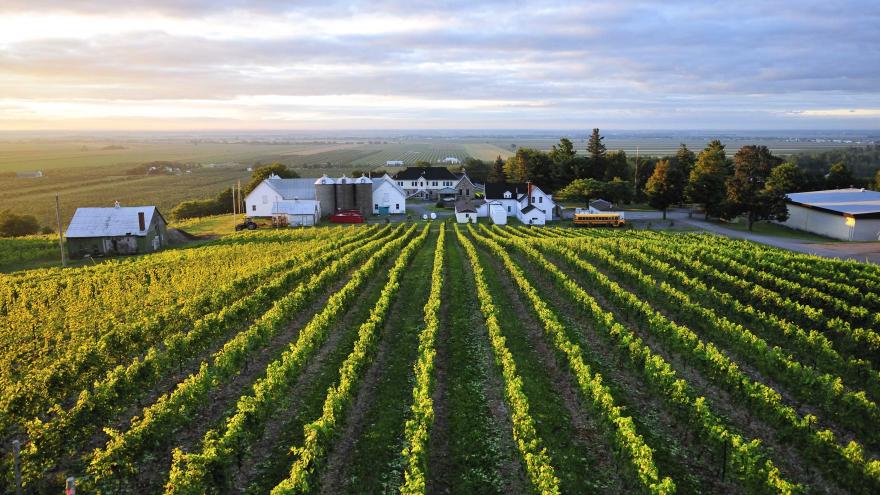 (CNN) -- When workers arrived at Canada's Vignoble Coteau Rougemont vineyard on Thursday, ready to pick the last grapes of the season, they were in for a shock.

On removing the nets from their carefully cultivated vines, they discovered thieves had hit the site overnight -- making off with half a tonne of grapes, equivalent to more than 300 bottles of wine.

"In the morning, my workers went into the parcel, and started removing the nets, and when they got into the row, they realized that for half of the row, the nets were already taken off," said Michel Robert, owner of the family-run vineyard in Rougemont, Quebec.

"When they looked at it, they saw there were no more grapes on the row," he said.

The thieves made off with half a tonne of Vidal blanc grapes -- enough for 325 bottles of white wine, retailing at $5,000 Canadian dollars (around US$3,800) in total, Robert said.

Robert told CNN that he thinks thieves used an all-terrain vehicle, garbage bags and a small trailer to make off with the grapes in the middle of the night, noting that they left behind a trash sack as evidence of their exploits.

"People were surprised, shocked, frustrated, angry -- all the adjectives, you know," he said. "It's the work of six months. You work on it for six months, you take care of the vines, you prune, you spray, you do all kinds of treatment on it so you can collect the fruit. And six months later, you're ready to pick it up, and it's gone," he added.

"Half a tonne is half a tonne, and we were counting on those grapes to produce wine."

Robert said the vineyard has filed a police report -- but he doesn't think think the grapes could have been stolen by another wine producer. Instead, he has his own suspicions about who stole the bounty.

"It's probably somebody that wanted to make wine in his garage or basement," he said, adding: "I would say an amateur wine maker that decided to test his skills with our grapes."

"It's not common -- for us, we've got some parcels that are near some houses, sometimes you go there and you notice a few grapes have been taken off, but not to this magnitude," he said.

The vineyard, which produces some 150 tonnes of grapes a year, is offering a reward to anyone who can help track down the missing grapes -- five cases of wine.

A spokesman for the Sûreté du Québec police service, Louis-Philippe Bibeau, told CNN that it is very unusual for this kind of theft to take place, and there are no suspects or major leads in the case at this time.

There have been several reports of such wine-related crime. Last year, news outlet The Local reported that French police were deploying officers to patrol and prevent grape thefts in the Burgundy region.

And earlier this month, police in Italy broke up a ring producing counterfeit Sassicaia wine, considered among the finest in the world and selling for hundreds of euros a bottle.