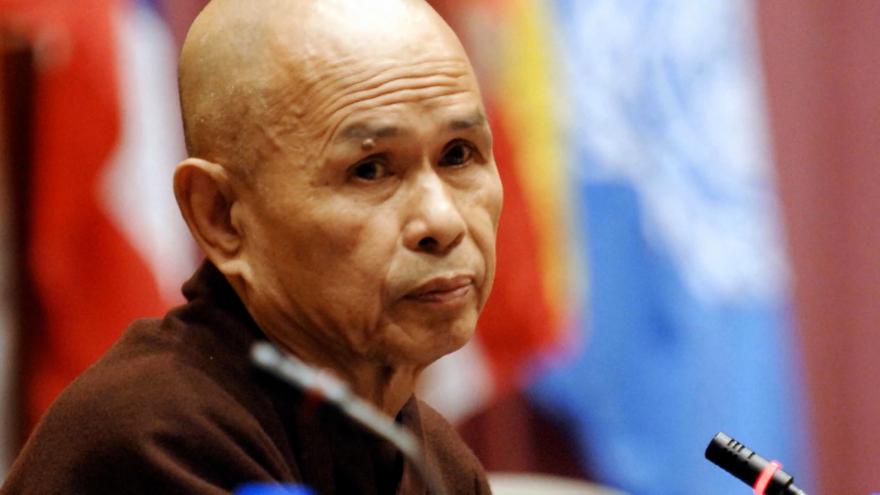 (CNN) -- Thich Nhat Hanh, a prominent Vietnamese Buddhist monk, peace activist and leading voice in opposition to the Vietnam War, has died at Tu Hieu Temple in Hue, Vietnam. He was 95.

The monastic organization that he founded, Plum Village, announced the news on their website.

"Thay [Thich Nhat Hanh] has been the most extraordinary teacher, whose peace, tender compassion, and bright wisdom has touched the lives of millions," the Plum Village statement said.

"Whether we have encountered him on retreats, at public talks, or through his books and online teachings -- or simply through the story of his incredible life -- we can see that Thay [Thich Nhat Hanh] has been a true bodhisattva, an immense force for peace and healing in the world," it said.

Thich Nhat Hanh traveled to the US in 1961 to teach comparative religion at Princeton University. Later that decade, he lectured at Cornell and Columbia University, where he continued to spread a message of peace and lobbied Western leaders to end the Vietnam War, Plum Village said.

In 1967, Dr. Martin Luther King, Jr. nominated Thich Nhat Hanh for the Nobel Peace Prize, calling him "an Apostle of peace and nonviolence." However, no Nobel Peace Prize was awarded that year.

Thich Nhat Hanh's mission of opposing the war led to both North Vietnam and South Vietnam denying him to the right to return to either nation for decades.

He was exiled for 39 years and was only given the permission to return to his homeland in 2005.