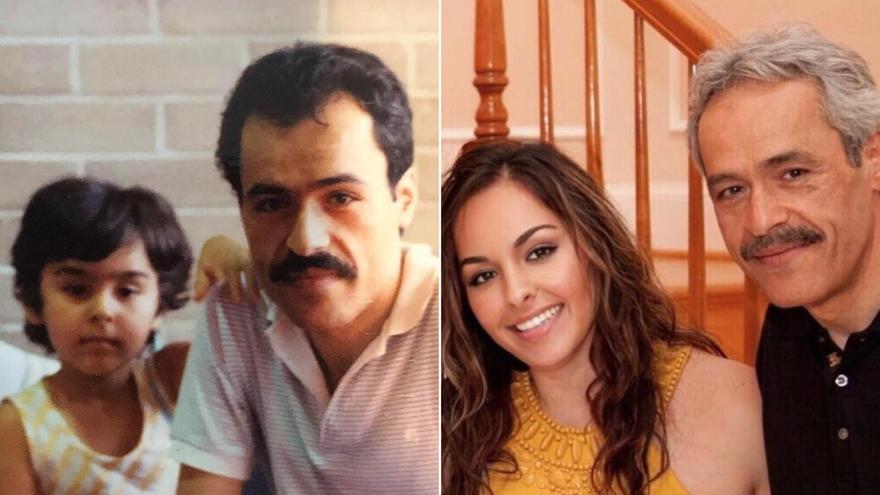 Elly Shariat, seen as a child and an adult with her mustachioed father, took solace in the fact that Alex Trebek looked like her dad.

(CNN) -- Elly Shariat spoke only Farsi when she moved to the US from Iran as a young girl. But when her father introduced her to "Jeopardy!" her world opened up.

She learned to pronounce words that appeared on screen. Her dad even paid her 25 cents when she got answers right.

For millions of Americans, Alex Trebek felt like one of the family. Millions of "Jeopardy!" viewers loved him for the way he deadpanned rap lyrics while impeccably dressed. He made stars out of some contestants and lightheartedly needled them, too.

But for scores of first-generation Americans and their families, Alex Trebek helped teach them English five nights a week.

"'Jeopardy!' was that wholesome show that you never had to be embarrassed to put on with your immigrant parents," Shariat told CNN. "It brought our whole family so much closer together and the loss of Alex Trebek is going to leave a huge hole in our hearts and our home."

News of Trebek's death at age 80 this week, less than two years after his diagnosis with stage 4 pancreatic cancer, has devastated viewers who learned English by watching him nightly on "Jeopardy!" He helped them feel more comfortable in their adopted country, they said, and inspired a lifelong love of learning (and, of course, game shows).

'Jeopardy!' was an intro to American culture

Over two decades of studies have shown that immigrants often learn English from watching TV, and that reduces some of the stress that comes with acculturation, or the process of assimilating into the dominant culture.

"Jeopardy!" is, in many ways, the perfect primer on America for new Americans. It's on basic cable, airs five nights a week after typical work hours and its subjects span history, the arts and pop culture touchstones -- plus, it's anchored by one of the most likable men on TV.

At least two people who learned English from "Jeopardy!" have appeared on the show to tell Trebek about his impact on their lives: in February, contestant Kristyna Ng talked about growing up in Canada as a Chinese immigrant who parroted Trebek to learn English.

And in an episode that aired this month, Burt Thakur wiped tears from his eyes as he thanked Trebek for teaching him English.

"My grandfather, who raised me ... I used to sit on his lap and watch you every day," Thakur said at the end of the episode after he'd netted over $20,000. "So it's a pretty special moment for me man."

Trebek was a family favorite

Several "Jeopardy!" fans told CNN they were introduced to the show by their grandparents, too, who learned English from watching Trebek alongside their grandchildren.

Larry Sulner, 23, was partly raised by his grandparents. They spoke only Hungarian then, but they tuned into Trebek's show religiously, he said.

"They didn't understand much, if anything, but my grandmother would always say what a nice gentleman ('úriember') Alex Trebek was," Sulner told CNN.

Despite the language barrier, Sulner watched "Jeopardy!" and "Wheel of Fortune" at least three times a week from ages 2 to 10. He credits both shows, but "Jeopardy!" especially, for teaching him English at a young age.

"Alex Trebek and 'Jeopardy!' helped me become a know-it-all and trivia wiz," he said. "I owe the fact that I read at 3 to having the clues on screen and having Alex read them so clearly."

Maia Regman, a 21-year-old Howard University student, told CNN she treasured the memories of taking a break from her homework to watch "Jeopardy!" with her grandparents, who immigrated from Honduras to New York's Bronx borough.

"It was really empowering seeing how proud they would be of me, even if I only got one question right during the show," she said.

The show made them feel at home in the US

Autriya Maneshni, now 19, moved to the US from Iran when she was 9. She only spoke Farsi then, and she felt uncomfortable in a school where no one spoke her language.

She still remembers the first night her dad turned on "Jeopardy!" After a month of watching the show nightly, she found that she was starting to understand English.

Finally, she started to feel more at home in her new country.

"People around made sense for once, and I owed it to 'Jeopardy!'" she told CNN.

Maneshni and her family still watch "Jeopardy!" together -- it's been their tradition for 10 years.

He was a role model who inspired a love of learning

In earlier seasons of "Jeopardy!" Trebek rocked a curly mane and a bushy mustache. Seeing someone who looked like her Iranian dad meant the world to a young Elly Shariat when she first moved to the US in 1986.

"To a little girl who had spent her first four years of life in a state of flux until we could get to safety and refuge here in the US, hearing my dad, my hero, speak English and hearing him say the same answers as the people on TV getting them right was mind-blowing!" she told CNN.

With her "Jeopardy!" training and her father's encouragement, Shariat competed in spelling and trivia competitions as a kid and grew up to be a publicist who works with words for a living. She even tried out for the show twice, though she hasn't made it yet (she's considering auditioning a third time).

Trebek's last episode, filmed just over a week before his death, will air on Christmas Day. Shariat, who said she's never missed an episode since 1986, will be watching.

So will scores of others whose lives Trebek touched.