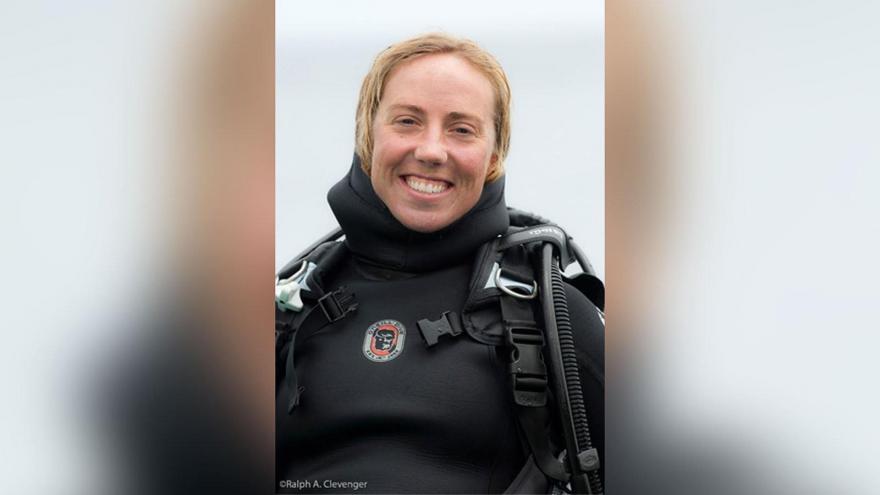 Kristy Grinstad was a marine biologist who grew up swimming off the state's Channel Islands. She was also the owner of a Santa Cruz-based diving company, and was on board the Conception, her brother said. CREDIT: Ralph A. Clevenger/World Diving Adventures

(CNN) -- Thirty-nine people on board the Conception were resting after a day of diving and gourmet meals when flames engulfed the vessel in the predawn hours of Labor Day.

Most of the passengers had come from several towns in the San Francisco Bay area to dive among colorful underwater sea life for three days, Santa Barbara County Sheriff Bill Brown said.

Of the 39 aboard, 33 passengers and one crew member are presumed dead. Only five people -- all crew members -- were found alive, and the bodies of 20 people have been recovered off the coast of Santa Cruz Island.

While the identities of those on board the Conception have not been released by authorities, here's what we know about a few of them:

A marine biologist who grew up swimming off California's Channel Islands and the owner of a Santa Cruz-based diving company was on board the Conception, her brother said.

Kristy Finstad was leading a dive trip on the vessel, Brett Harmeling wrote in a Facebook post.

Finstad is the owner of Worldwide Diving Adventures, a local company that chartered the Conception dive boat from Truth Aquatics, business records show.

She had "thousands of dives under her belt" and studied marine life in the Tahitian Islands, Costa Rica and Australia, according to her company's website.

"My mission is to inspire appreciation for our underwater world. I feel incredibly fortunate to be in the service of helping people invest in experiences of a lifetime," she said in her biography.

Finstad and her husband had also sailed across the South Pacific "to find new and amazing places" for their clients.

"Thank You ALL for your unconditional love and support during this incredibly tragic time. My family and I truly appreciate it. No final word on my sister Kristy; however, it is likely she has transitioned to be with the good Lord," Harmeling wrote Tuesday on Facebook.

Allie Kurtz felt most at home diving in the ocean, her mother said.

Cherie McDonough flew to California from Cincinnati, Ohio, after she heard about the fire on the Conception diving boat. Her 25-year-old daughter was a passenger on the ship, she said.

Kurtz worked for Paramount Pictures for several years but "wanted to follow her dreams of the ocean, the sea, diving," her mother told reporters at a memorial at Santa Barbara Harbor.

"She was a go-getter," her mother said. "She loved it here, and she loved the boat. She loved diving,"

McDonough collapsed to the ground and began to sob when she saw the photo of her daughter at the memorial. There were 34 candles for the 34 people who are presumed dead.

The message beneath the photo said: "I love you Allie — and you know I always will. I'll miss you forever."

Killgore did not name Chan's daughter, but in a Facebook post, US Rep. Eric Swalwell, D-California, identified her as Kendra.

Kendra Chan was a biologist with the US Fish and Wildlife Service, CNN affiliate KRON reported.

Scott Chan had been teaching two AP physics classes within the district for the past three years, the district's statement said.

"Mr. Chan was a beloved teacher at AHS among students and colleagues," the school district said in a statement. "His students knew him to be an innovative and inspiring teacher who developed a passion for physics among his students."

"His loss is a tremendous tragedy for our school district."

Five members of a family

Five members of a Stockton, California, family were aboard the boat celebrating a birthday, Dominic Selga told CNN affiliate KOVR.

Selga said he's trying to come to terms with the news that his mother, Fernisa Sison, her husband, Michael Quitasol, and his three stepsisters -- Angela Quitasol, Evan Quitasol and Nicole Quitasol -- are likely dead.

"You know deep down that it's true, that they've passed on and they were in that boat and they are not going to be found," Selga told the affiliate.

The family loved diving, and signed up for a long weekend of unlimited colorful underwater sea life exploration and the gourmet meals that come with it. The adventure was to celebrate Michael Quitasol's birthday, he said.

"Diving is something they shared. It's one thing that ... made them happy together," he said.

Arizona resident Neal Baltz was on the diving boat that went up in flames, his father, John Baltz, told CNN affiliate KNXV.

Charles "Chuck" McIlvain died in the boat fire, according to the Sea Shepherd Conservation Society, which identified him as the husband of one of its photographers.

"Sea Shepherd is one big family, and when one of our own suffers from a tragic loss, each and every one of us agonizes along with them," the post reads.

Marybeth Guiney is among those presumed dead in the fire, according to the Facebook page of the Malibu Divers company, which offers diving certification training and equipment, among other services.

"All of us are devastated by the Conception dive boat tragedy," the post reads. "We'd like to honor Charles McIlvain and Marybeth Guiney by asking you to tell a story about a dive adventure ... you had with them."

Lisa Fiedler, a 52-year-old hairdresser, photographer and avid diver from Mill Valley, California, is believed to have died in the fire, her mother Nancy told CNN affiliate KGO.

"Everybody loved her," Nancy Fiedler told KGO. "She was a kind, gentle person. She was a naturalist, she loved nature."

Three members of a family

Apple engineer Steve Salika; his wife, Diana Adamic; and their daughter were aboard and are believed to have died, according to a statement from the company.

"It's with very heavy hearts that we mourn the passing of two of our colleagues in the tragic boat fire that took place Labor Day weekend," the statement reads. "We share our deepest condolences with their families and friends.

"Steve was a 30-year Apple veteran whose energy and enthusiasm touched so many people across our company throughout his career. He met his wife at Apple and was aboard with her and their daughter."

Mike Kohls served as the Conception's galley cook and deckhand, his brother told reporters on Monday, as he awaited word on whether Kohls was among the survivors. Kohls' fate wasn't immediately clear.

The lifelong surfer and father of a daughter typically would make breakfast for the passengers on the ship around 4 a.m., James Kohls said.