These twin sisters are college basketball stars and have 3 million TikTok followers. Now they're cashing in 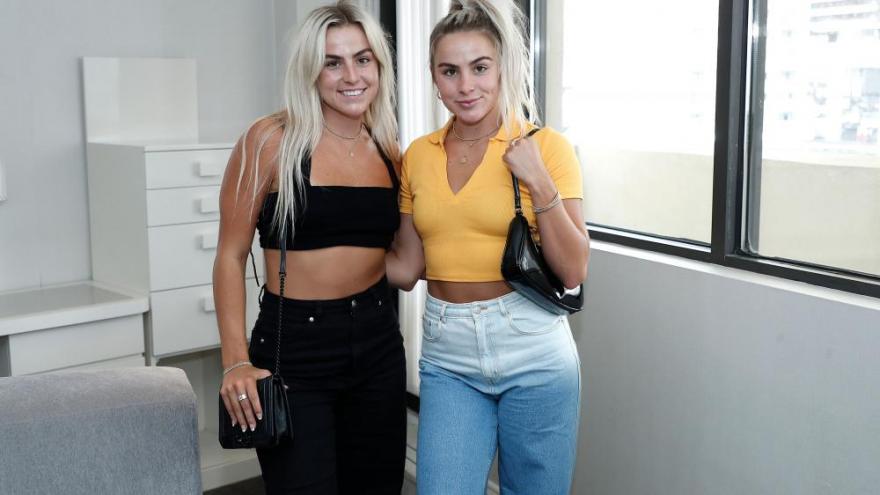 (CNN) -- Unless you are a huge fan of college hoops or a regular on TikTok, you may not be familiar with Haley and Hanna Cavinder.

But they are ushering in a new era of college sports.

The twin sisters, stars on Fresno State's women's basketball team, are arguably the leading faces of the Name, Image and Likeness (NIL) movement that is now allowing top college athletes to earn money from their talents and fame.

"This is a big switch for all student-athletes," Haley Cavinder told ESPN during the twins' sudden media blitz. "Being able to use your name, image and likeness is something we all deserve, and I'm really thankful the NCAA is finally passing this."

Experts in endorsements and marketing estimate the Cavinders, with 3.4 million followers on TikTok, could earn hundreds of thousands of dollars a year.

And it all started with videos they made to fight boredom last year while in quarantine.

As twins, they are a unique brand

The college juniors are both 5-foot-6 -- undersized for Division 1 basketball -- and major in business. They rarely wear matching outfits, but their basketball stats are almost identical.

Haley Cavinder finished last season with a scoring average of 19.8 points per game while her sister had 17. Haley Cavinder has been named Player of the Year in the Mountain West conference, and both sisters have been all-conference picks twice.

"Haley and Hanna are blessed with unique qualities, such as being twin sisters who both excel in Division I basketball, but their stardom off the court goes far beyond that," said Frank Pucher, senior associate athletics director at Fresno State.

"They are the perfect representation of the modern-day collegiate athlete. They are incredibly hardworking in their sport, they excel academically and they have clearly thought about and defined the path they want to go in life beyond sport."

The pandemic shut down the campus right after their freshman season. But in April of last year, with extra time on their hands, Hanna persuaded her sister to join her TikTok and make playful videos under a shared account.

The twins filmed themselves doing synchronized dance moves, lip synching, shooting three-pointers and dribbling basketballs to hip hop beats, and they began to grow a following. One of the dribble-dance clips, posted in August 2020, has more than 27 million views.

"During quarantine we wanted to make TikToks, kind of like the rest of the world," Hanna Cavinder told the Fresno Bee. "Everyone was just on there just trying to find something to do and after that it just started growing and growing. It just kind of happened."

By spring 2021 they had more than 3 million followers on TikTok, plus sizable followings on YouTube and Instagram, making them valuable to advertisers and sponsors trying to reach diverse audiences outside of basketball.

Their growing online fame has further boosted their popularity with the Fresno State fan base.

"They are fan favorites, in part due to their off the court stardom," Pucher said, "but more so as a result of the way they play the game and the success they have on the court."

They started playing basketball before preschool

Haley and Hanna went to high school in suburban Phoenix and are not the first athletes in their family. Their father, Tom Cavinder, played basketball at Nova Southeastern in Florida.

Before the twins started preschool, they were already playing basketball and looking up drills on YouTube, their parents told YourCentralValley, a news site in Fresno. Until sixth grade, they were competing in boys' leagues.

"Right from the beginning, they seemed super competitive," said their mother, Katie Cavinder.

When they were 3 or 4 it was not enough for them to just dive into the family swimming pool -- they would do back flips, Tom Cavinder said. When the girls laced up at the skating rink for the first time, they moved like they'd done it for years. By their second lap around the rink they were skating backward, he said.

"They have such a chip on their shoulder because of their size," their dad said.

Before they reached high school the twins were already getting offers from colleges to play basketball. But their fame has not changed them, he said.

"They are good kids, they go to church on their own ... they really care about other people," Tom Cavinder said. "When you take all of the basketball stuff away, we want all of our girls to be good people, and we want them to build their own successes."

College athletics rake in billions of dollars, but the NCAA has long argued that restrictions on student athletes are necessary to ensure they maintain amateur status and don't blur the line between college and professional sports.

Until this month, the Cavinders and other college athletes were considered amateurs by the NCAA and were banned from marketing themselves.

Now they're jumping into uncharted waters, hoping to get a piece of a lucrative pie. As many as 460,000 NCAA student-athletes across the country can now sign sponsorship deals, and big consumer brands are exploring this untapped market.

The NCAA says its interim policy on NILs will remain in place until federal legislation is passed or new rules are adopted.

Meanwhile, the Cavinder twins are adding to their portfolio of endorsements through a deal with GoPuff, an app that delivers items from convenience stores.. And they're still dancing to their own tune.