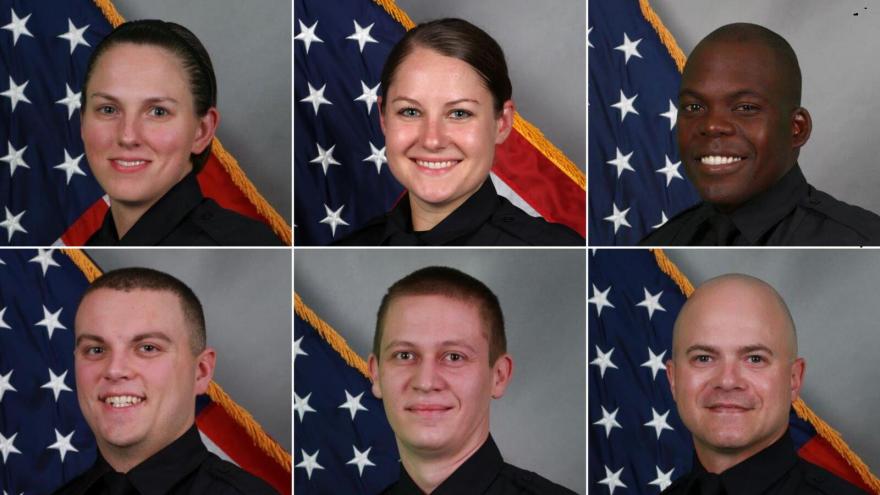 (CNN) -- The computerized voice emanating from the white motor home offered a terrifying warning: "This vehicle will explode in 15 minutes."

The voice repeated the message, counting down as the minutes passed.

As the countdown continued, six police officers who heard those warnings sprang into action, helping residents in downtown Nashville evacuate before the motor home made good on its threat and exploded Friday morning.

The bomb tore through the neighborhood in the predawn hours, yet only injured three people thanks to the officers' quick work and bravery, officials said.

"Officers immediately began knocking on doors and evacuating residents here, not knowing if the bomb was going to detonate immediately or if it was going to go off in the time that it was stated," Metro Nashville Police Chief John Drake said.

Nashville Mayor John Cooper praised the six responding officers, saying they "took swift action and directed people away from danger to save lives, even at the time that their own lives were imperiled."

"They are heroes. And I am grateful for them and all of Nashville's first responders," Cooper said.

The Metropolitan Nashville Police Department identified the officers in a news release late Friday as:

Three civilians were hospitalized and are in stable condition, officials said. The force of the explosion knocked down one officer, police spokesman Don Aaron said, and caused hearing loss in another. But no officers suffered serious injuries.

Mayor Cooper described it as a "deliberate bomb," but officials did not yet have a full explanation for the unusual warnings and blast.

Nashville Vice Mayor Jim Shulman told CNN's Anderson Cooper on Friday that a female voice was speaking in the warning message played from the RV. Betsy Williams, a witness who lives in another building across the street from the explosion, described it as a "computerized" and female voice.

"This area must be evacuated now," the voice said three times.

Mayor Cooper noted the hardships the city has faced this year and expressed appreciation for the efforts of the responding officers.

"This is a year where we understand what our first responders mean to our community time and time again," Cooper said. "Unfortunately on Christmas Day, you have another example of that."

CORRECTION: Two previous versions of this story misstated the first name of one of the six officers. The officer's name is Tyler Luellen.