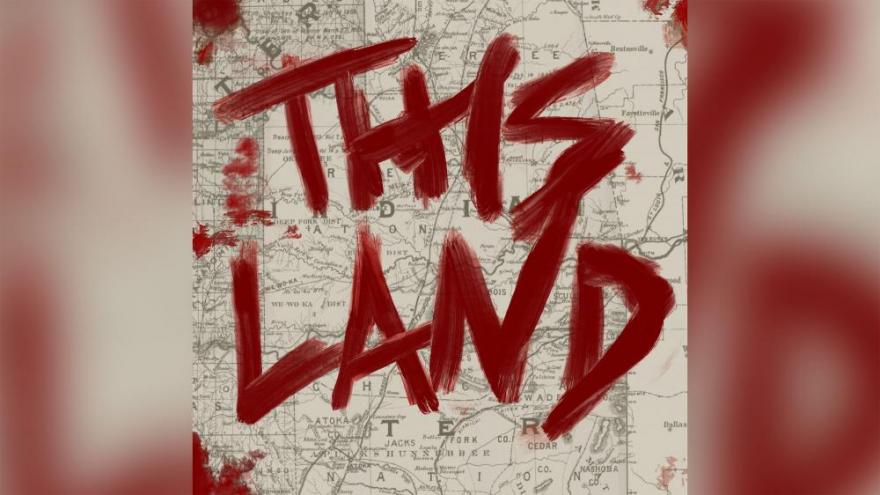 Rebecca Nagle, a member of the Cherokee Nation, hosts the podcast that centers around two murder cases in Oklahoma that are centuries apart.

(CNN) -- Getting through 2020 was no small feat -- and among the hardest valleys to navigate were the conversations about race. It's never easy to talk or listen to debates about it, but we were forced to be honest about where we stood and where we wanted to go.

Who knew that a year that started out with the shocking death of Kobe Bryant and the growing threat of Covid-19 would get partially upended by the killings of Black and brown people -- and the multiracial protests that followed. It was a watershed year when it came to talking about racism. The increased threat of white supremacist groups reminded us that it remains a pervasive part of American life.

But there were moments where there seemed to be turning points, where it felt like people were really listening to the concerns of Black, Latino, Asian and Native Americans. The rise of podcasts addressing race proved there's an appetite for difficult but necessary dialogue -- and there's no one way to talk about race. It's OK to laugh and cry or be critical and compassionate.

Here are just some of the most powerful podcast episodes (there were just so many to choose from). The conversations not only got at the heart of what was on peoples' minds but provided guidance on how to talk about the problems, solutions and shenanigans that impacted so many people this year:

Saidu Tejan-Thomas Jr. hosts this anecdotal podcast about the fresh ways activists in the movement for Black Lives are fighting racism. Each episode tells a different story. "Lesser Known Creeps" stands out because it advances the confederate monument conversation. Over the past few months, we've heard a lot about the generals, presidents and slavers we no longer wish to honor in 2020. This episode adds a few more names to that list, and then proposes individuals we might recognize instead.

In this weekly podcast, hosts Gene Demby and Shereen Marisol Meraji discuss the ways race touches pop culture, politics and history. The show launched in 2013 and has since set a high bar for journalists covering the complexities and nuances of race and culture. If you are new to the podcast or haven't listened in awhile, the episode, "Claim Us If You're Famous," is a great place to start. The focus is VP elect, Kamala Harris' Black and South Asian roots -- and how her roots impacted her campaign and the way we talk about people who identify as multiracial in America.

Host Willa Paskin examines cultural questions. The show doesn't focus on racial issues, but it's thoughtful and thorough approach to "The Karen" episode was on point. The term, which is critical and sometimes misogynist, has come to describe white women in 2020 who weaponize their Whiteness against people of color, for no other ostensible reason than racism. Willa dives deep into how Karens came to be and how the term has impacted the way Americans judge White women today.

4. Latino USA (Futuro Media) 'The Myth of the Latino Vote'

We are still unpacking all the lessons learned from the 2020 presidential election. Among them: how to court Latino/Chicano/Hispanic/Latinx/Nuyorican/Cuban/Dominican/Puerto Rican/Tejano/etc. voters around the country. Hosted by Maria Hinojosa, Latino USA has been covering these communities for nearly 30 years. It's the longest running Latino-focused show on US public media. Though there is still some debate over whether Latino is designated as a race or an ethnicity, the episode, "The Myth of the Latino Vote," is helpful. It breaks down the different histories and policy interests of various Latino communities.

In this 15 episode series, host Rebecca Carroll discusses the way race impacts the issues that mattered to American voters this election season. Carroll's conversation with former presidential candidate, Julián Castro, focuses on the census and why he encouraged everyone to fill it out, even undocumented residents and others who are concerned that the government will use the data against them.

Hosted by Cathy Erway, this podcast explores stories from the Asian diaspora in America. The 2020 season focused on anti-Asian racism in the US, as well as how Asian Americans respond to racism against others. "Hate Goes Viral," is one of three anecdotal episodes examining how different Asian American communities responded to pandemic-induced hate and harassment. This episode tells the stories of the assault of an elderly man in San Francisco and a thoughtful response to an anti-Asian tirade in New York.

7. Silence is Not an Option (CNN) 'Reimagining the Police'

Every week, host Don Lemon speaks with academics, activists and authors about how and why racism shows up in schools, elections, and other American institutions. Each episode also outlines the steps listeners can take to be anti-racist. The episode "Reimagining the Police," explores reforms that might help police and communities who are weary of police, feel safer. Don speaks with Gwen Garr about why she supports federal anti chokehold legislation. He also talks to Newark Mayor, Ras Baraka about why he thinks police are necessary but need to do their jobs differently.

Full disclosure: I am a producer for Silence Is Not an Option.

Hosts Bill Rhoden and Jamal Murphy discuss the intersection of race, sports and social justice. On this episode, they speak with Elizabeth Williams, forward for the Atlanta Dream about her activism against police violence with the WNBA this summer, and why she's campaigning against her team owner, Senator Kelly Loeffler. I am an occasional contributor to this podcast.

On this weekly podcast, listeners never have to guess where Jemele Hill stands on hot topics regarding racism and injustice, so the episode, "Megan Rapinoe -- Grinding All My Life" should come as no surprise. Rapinoe could lead a course on activism and allyship. Her conversation with Jemele touches on all the things you'd want to know about soccer phenom and host of the HBO Max show, "Seeing America with Megan Rapinoe" -- like how she proposed to her WNBA super star fiancée, if she ever regrets kneeling in solidarity with Colin Kaepernick, and how being passionate about social justice has affected her soccer career.

Ezra Klein's twice weekly show does not always discuss race, but it tackles the intersection of race and politics with depth. In the episode, "Black Republicans, Donald Trump and America's 'George Floyd moment,'" Ezra explores the Republican party's historic and complex relationship with Black voters and why White conservatism and Black conservatism are different.

Rebecca Nagle, a member of the Cherokee Nation, hosts the podcast that centers around two murder cases in Oklahoma that are centuries apart -- and how they are connected to a legal battle for land rights for the Muscogee Creek Nation and four other tribes in the state. The episode, "The Ruling," details how the case concluded with a historic Supreme Court decision regarding the Five Tribes. Nagle talks to the lawyers, legal scholars, and journalists about the emotional and political implications of the decision. Tribal disputes over land are not always considered to be racial issues. Yet, "The Ruling" episode suggests that racism has impacted the way the federal government has handled sovereignty issues.

Still Processing is a good podcast for people who like their pop culture news served with a touch of race, class and gender analysis. Hosted by Wesley Morris and Jenna Wortheim -- the show sounds like a conversation you'd overhear at a (pre pandemic) coffee shop, between two really smart and fun friends. In the episode, "Reparations for Aunt Jemima!," Jenna and Wesley examine the way food companies, sports leagues, and even music groups responded to this summer's condemnation of anti-Black racism.

This podcast is for anyone who wants to understand how education, economics and race intersect. It was introduced to listeners in 2018 as a limited-run series about public housing in Nashville, TN. In season two, host Meribah Knight chronicles the city's efforts -- past and present -- to desegregate its public education system. In the episode, "What You Can't Unsee," Knight examines who has the power to desegregate schools, who is ultimately responsible for making it happen, and how Black and White families are affected when nothing changes.