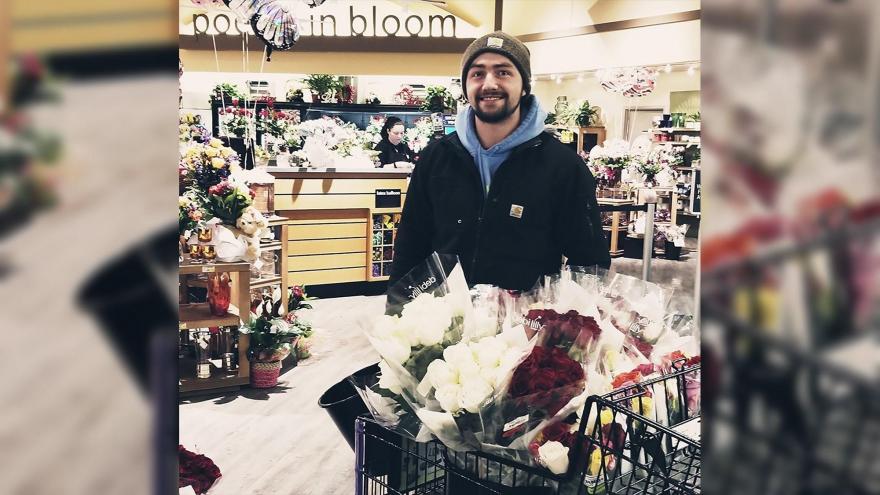 Seth Stewart's cart is loaded with 300 roses to deliver on Valentine's Day, and he will have to go back for more.

(CNN) -- Eight years ago, Seth Stewart, 28, and one of his three brothers decided to pass out two dozen roses to their single friends for Valentine's Day. The community got wind of their generosity, and the next year they began receiving requests, turning a small idea into an annual tradition.

Stewart says the idea has taken off, and he has hired a group of drivers to hand out more than 550 roses to women all over the Spokane, Washington area on February 14.

Stewart says that, in the beginning, they took requests by text or email, but now everything is filtered through their "Rose Rush" Facebook page.

The roses are free of charge, and every requested recipient gets one. Stewart says some senders also include personal messages explaining why they want their recipient to get a rose.

"Some of the stories are so touching," Stewart says as he describes a message to a recent widow. "No matter how bad you are feeling there is always someone thinking about you."

Stewart says the roses are a physical reminder for some recipients that they are not alone.

In addition to single women and widows, community members also ask that roses be delivered to women who have had a significant impact in their lives. Deployed husbands and boyfriends will also contact Stewart to add a personal touch to a flower delivery for their significant others.

"Every single year we do this, there are always one or two women who break down sobbing because it means so much to them," Stewart says.

Stewart also keeps a personal list of people to deliver flowers to that he complies every year. He even has repeat customers, like a few moms in the area that have touched his life.

And he says his first four customers remain the same year after year -- his mom and three sisters.