These celebrity dance creators think 'Fortnite' should pay them for their moves. The courts may disagree. 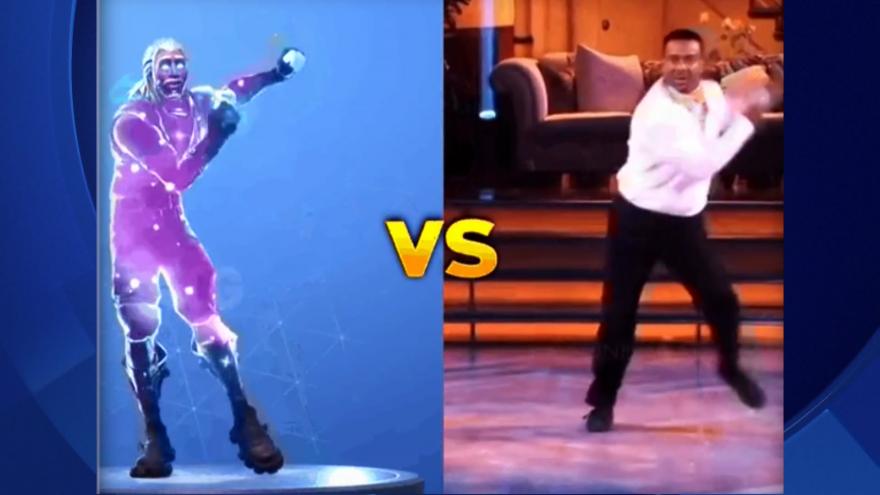 The 41st President sponsored a 7-year-old boy in the Philippines for ten years using a pseudonym, revealed Compassion International, the nonprofit who connected them.

(CNN) -- They say to dance like no one's watching. But what if millions are watching an avatar of you dance and someone else is making billions from it without your permission?

That's the intriguing question at the heart of lawsuits from several dance creators who say that the massive video game "Fortnite" is profiting off their their moves.

The question comes as actor Alfonso Ribeiro, who played Carlton on "The Fresh Prince of Bel-Air," filed lawsuits against "Fortnite" developer Epic Games Inc. and "NBA 2K" developer Take-Two Interactive Software Inc., saying that they put his signature dance in the games and are profiting off of it without his permission.

The lawsuits ask a California federal court to bar the game developers from using, selling or displaying the dance. The suits state that Ribeiro is in the process of copyrighting the dance.

He argues that he is "inextricably linked" to the dance, an arm-swinging, hip-shaking boogie to Tom Jones' "It's Not Unusual" that Carlton performs when he thinks no one is home in an episode of "Fresh Prince."

And Ribeiro is not the only person suing. Attorney David L. Hecht said he and his firm are also representing rapper 2 Milly and Russell "Backpack Kid" Horning in lawsuits against Epic Games over "Fortnite's" use of their signature dances within the game.

Hecht said "Fortnite" creators used numerous celebrity dances in their game. "More plaintiffs are coming out of the woodwork each day," he said.

Epic Games and Take-Two subsidiary 2K Games did not respond to a request for comment on Monday.

Choreography and US copyright law

Based on existing case law, the dance creators may have a tough time in court on a copyright claim. In the United States, The Copyright Act of 1976 protects works of choreography, but it does not protect individual dance steps.

Michael Jackson cannot copyright the moonwalk, for example, and you can do Madonna's "Vogue" dance or the Cha Cha Slide without fear of a lawsuit.

A circular from the US Copyright Office defines choreography as a "composition and arrangement of a related series of dance movements and patterns into a coherent whole." This generally covers ballets or extensive Broadway performances, for example.

"The U.S. Copyright Office cannot register short dance routines consisting of only a few movements or steps with minor linear or spatial variations, even if a routine is novel or distinctive," the document says.

Indeed, while copyright infringement lawsuits in music or video are fairly common, they are rare for choreography, said Jane Ginsburg, a professor of artistic property law at Columbia Law School.

"Egregious instances of copyright are usually addressed through shaming, not law," he said.

However, Fabio Marino, an intellectual property lawyer at the law firm Polsinelli, said the lawsuits may be more likely to succeed on a right of publicity claim.

The right of publicity protects a person's right to his or her likeness, which could come into play if a court found that "Fortnite's" dances are significantly identifiable as a specific person's likeness.

"If that dance was unique enough that you would associate it with the actor, then I think that would be a good cause of action and a more likely cause of action to succeed than a copyright action," Marino said.

The legal challenge against "Fortnite" has been simmering among artists and dance creators for months now. In July, the issue reached a new level of prominence when Chance the Rapper tweeted criticism of "Fortnite" to his sizable following.

"'Fortnite' should put the actual rap songs behind the dances that make so much money as Emotes," he wrote, referring to the game's customizable dances. "Black creatives created and popularized these dances but never monetized them. Imagine the money people are spending on these Emotes being shared with the artists that made them."

The legal challenge could also be extremely valuable.

"Fortnite," an addicting combination of "Hunger Games"-like battle royale and "Minecraft"-like building, is perhaps the most popular video game in the world. Developer Epic Games recently announced that 78.3 million users logged in to play "Fortnite" in August. The game generated $125 million in revenue last March alone and has only grown since.

Importantly, "Fortnite" is free to download and play, but users can spend extra money to buy their characters customizable dances, known in the game as "emotes."

Many of the emotes are general dance moves like the worm, the robot, or a disco shuffle. But a number of them are at best homages and at worst straight copies of recognizable moves from pop culture.

The game also includes an emote called "Dance Moves" that appears to be a replica, down to the beat, of actor Donald Faison's moves in the TV show "Scrubs" as his character listens to the song "Poison."

Like with other dance creators, Faison has expressed some frustration with "Fortnite"'s use of his likeness.

"Dear 'Fortnite'... I'm flattered? Though part of me thinks I should talk to a lawyer," Faison wrote on Twitter in April.

At a "Scrubs" reunion hosted by Vulture last month, Faison was asked to do the dance, but he declined.

"If you want to see it, you can play 'Fortnite' because they jacked that s***," he said.

"Scrubs" creator Bill Lawrence responded that "Fortnite" inquired about the legality of using the dance and Lawrence said it was fine because "it's just a character dancing."

Faison, in an angry voice but with a smile on his face, said he did not get paid for any of it.

Still, Faison said that there will be "no Epic lawsuit" in a tweet last month, "just epic dancing."