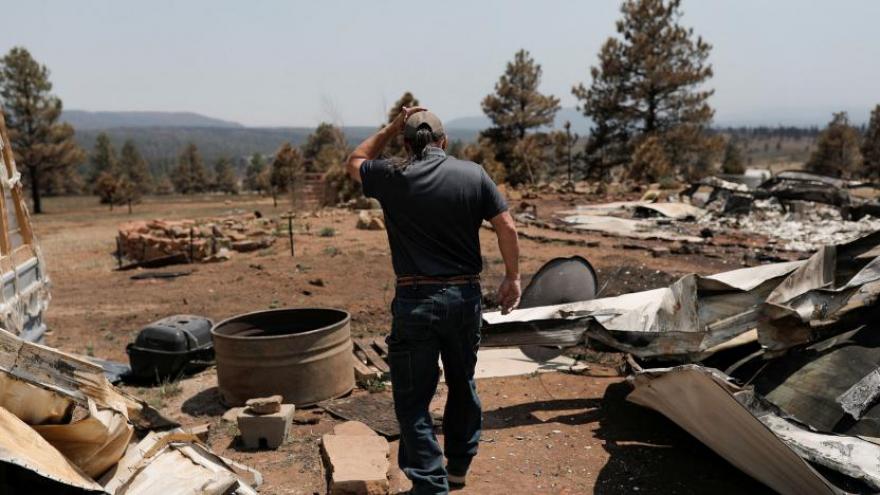 Michael Salazar walks through his property that was burned during the Hermits Peak and Calf Canyon fires in Tierra Monte, New Mexico.

(CNN) -- Forecasters say the West could be looking at a particularly bad wildfire year, as several destructive fires have already ignited well before the hottest, driest months. A fast-moving blaze Wednesday night destroyed 20 homes in a wealthy Orange County, California, community. In New Mexico, more acres have already burned from large fires in the first five months of this year than in any other year over the past decade.

Wildfire is a prevalent risk to homeowners in the West. But quantifying the risk of wildfires has until now been more difficult than floods, for instance, because of their nature. Wildfires spread rapidly, the wind can move embers and sparks long distances, catching on trees and buildings.

On Monday, nonprofit First Street Foundation released a nationwide wildfire risk assessment — a massive trove of data that shows homeowners and business owners how at-risk their property is to wildfire. The data will be integrated into Realtor.com, so that prospective buyers can see what their fire risk for any given property is.

"Unfortunately, [until] this point there's never been a way for people to understand what their wildfire risk is on a property level," said Matt Eby, founder and executive director of First Street.

While the vast majority of those — 49 million — are at minor risk, more than 4 million properties are at severe or extreme risk.

Many of the properties with the highest wildfire risk are in the West, where scientists say hot and dry conditions are exacerbated by human-made climate change. But First Street also found that risk will increase both in the West and other parts of the country over the next 30 years.

"Homes that have wildfire risk today, their risk roughly doubles over a 30-year period because the climate is warming; fuels are drying," Eby told CNN.

Outside experts who reviewed First Street's nationwide risk assessment told CNN the assessment holds up with what they're seeing: Western states as well as those in the Plains are experiencing drier and hotter weather, which dries out vegetation and creates more fuel for fire.

"The hazard is increasing because burn probabilities are going up," said Dave Sapsis, a wildland fire scientist at Cal Fire. "There's more fuel, the fuels are highly desiccated because we're in protracted droughts.

"There's also more [property] that's out there in the way to get impacted."

In addition to Western states -- that already face high risk -- the risk will rise in Southern states such as Texas and Florida, as well as in states in the Appalachian region of the country, like West Virginia, Kentucky and Pennsylvania.

"The risk is going to be increasing so much in the Appalachian and southeastern areas," said Ed Kearns, First Street's chief data officer. "When you're in these areas, you see green forests and green trees. In Florida and other parts of the Southeast, this kind of climate change looks different than it does out West, but fire is every bit as dangerous."

Six counties in New Mexico -- including areas where the Calf Canyon-Hermits Peak Fire has burned more than 280,000 acres -- are among the counties with the nation's highest percentage of properties at risk of wildfire, according to First Street's models.

In Texas, at least 90% of properties in 45 counties are at some risk, a sign that wildfire danger isn't just relegated to the West.

Dry grass is a key fuel for wildfire in Texas, according to Brad Smith, a wildland fire behavior analyst at the Texas A&M Forest Service. Over 30 percent of the state was in extreme drought in mid-May -- a month that is typically the state's wettest.

Smith was on his way to a fire in San Saba County when he spoke with CNN.

"I've been working fire for 40 years now," Smith said. "Homes aren't saved on the day of the fire, they're saved days, weeks, years ahead of time. Buying homes, you want to be aware -- just like a flood zone -- that there are fire zones, too, where homes are more at risk."