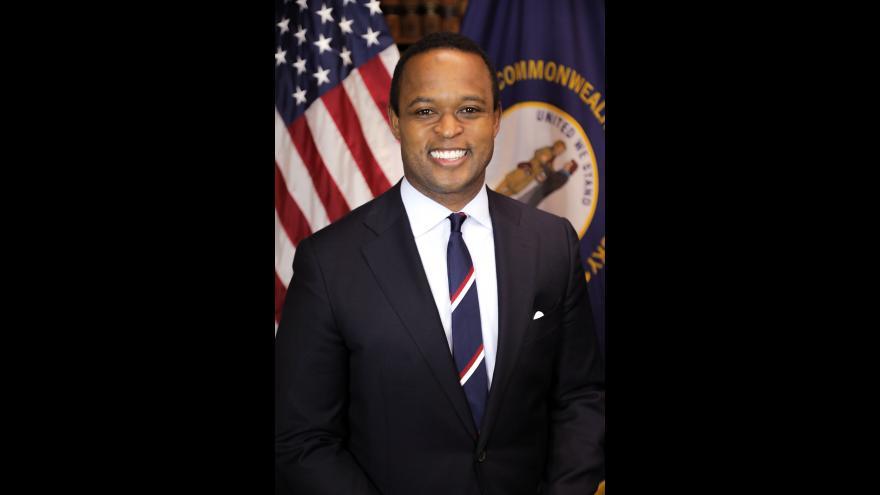 Daniel Cameron is the Attorney General of Kentucky. He's handling the investigation into Taylor's death.

(CNN) -- Crowds of protesters are chanting her name. The outcry over Breonna Taylor's death keeps on growing.

Now one of the officers involved in the shooting is facing felony charges, though protesters believe they are not sufficient.

Taylor was killed in March when police officers came to her door and attempted to serve a warrant. State and federal authorities have investigated the incident for months.

State Attorney General Daniel Cameron announced Wednesday that the officer has been indicted on three felony charges -- wanton endangerment in the first degree. He said the officers had been issued a no-knock warrant but were advised to knock and identify themselves.

Here's a look at the people tied to the case:

Taylor, 26, was an aspiring nurse. At the time of her death, she had been working as a certified emergency medical technician.

Her aunt, Bianca Austin, described Taylor as a "spunky, goofy little kid" who blossomed into a hard-working, goal-oriented young woman who placed an emphasis on family.

"She just was a fun person to be around," Austin said. "She's going to be truly, definitely be missed."

On March 13, Taylor and her boyfriend were in bed in her apartment in Louisville's South End when police attempted to serve a search warrant on her apartment shortly after 12:30 a.m. in a series of raids related to Taylor's ex-boyfriend. They eventually used a battering ram to open the door. Taylor's boyfriend, armed with a handgun and fearing an intruder, fired one shot, and police officers returned fire, killing Taylor, who was shot eight times.

The city of Louisville has agreed to pay $12 million and institute sweeping police reforms in a historic settlement of the wrongful death lawsuit filed by Taylor's family. The lawsuit against the three Louisville police officers involved in the raid, accused them of battery, wrongful death, excessive force, negligence and gross negligence.

People across the country have repeated Taylor's name loudly and often; in the streets and online, as they demand justice in her death. Like the police killing of George Floyd in Minneapolis, Taylor's death has fueled ongoing nationwide conversations over racial injustice and police brutality.

Kenneth Walker III, 28, was inside Taylor's apartment when police arrived. He was arrested and charged with attempted murder following the incident for allegedly shooting one of the officers who opened fire into Taylor's apartment. The attempted murder charge was later dropped, pending the outcome of what Jefferson County Commonwealth Attorney Tom Wine called "additional investigation" by the state and FBI.

Walker told investigators he heard banging at the door and assumed it was Taylor's ex-boyfriend, Jamarcus Glover. Taylor, who had awoken, shouted, "Who is it?" but Walker said there was no response.

He said he and Taylor scrambled to get dressed and that he grabbed his gun, which his attorney has said he legally owns. He said both he and Taylor were yelling, "Who is it?" but received no response.

As they made their way toward the front door, Walker said, the door flew off its hinges.

Police then returned fire, killing Taylor. There is no police body camera video of what transpired in the moments after officers broke through Taylor's door. Police said they identified themselves and didn't knock the door off its hinges but did use a battering ram to open the door.

Walker is suing the Commonwealth of Kentucky, the Louisville/Jefferson County metro government and members of the police department for $10.5 million, claiming he was maliciously prosecuted for firing a single bullet with his licensed firearm at "assailants" who "violently broke down the door."

Jamarcus Glover was the focus of the Louisville police narcotics investigation that led plainclothes officers to execute a warrant on Taylor's home. He had previously dated Taylor on-and-off for seven years, Walker told investigators.

Police said that Glover, who was suspected of supplying a local drug house, had recently used Taylor's residence as his "current home address," according to an affidavit for a search warrant. The detective who wrote the affidavit said he saw Glover walk into Taylor's apartment in mid-January and leave with a package before going to a "known drug house." Taylor's apartment was one of five locations police obtained search warrants for as part of the investigation.

Glover was arrested elsewhere during a series of raids that day but was released on bail.

He was arrested in late August after failing to pay bail on separate drug offenses in July, according to Jeff Cooke, a spokesman for the Jefferson County Commonwealth Attorney's Office. At the time, an attorney for Glover confirmed to CNN his client was arrested but declined further comment.

Taylor's family and their attorney have maintained that she was not involved in her ex-boyfriend's alleged drug deals.

Glover told the Louisville Courier Journal that police used misleading and wrong information to obtain the warrant, during which Taylor was fatally shot.

"The police are trying to make it out to be my fault and turning the whole community out here making it look like I brought this to Breonna's door," Glover told the newspaper. "There was nothing never there or anything ever there, and at the end of the day, they went about it the wrong way and lied on that search warrant and shot that girl out there."

The three Louisville police officers who fired their weapons that night were plainclothes narcotics officers.

Hankison was indicted on three charges of wanton endangerment in the first degree.

The other officers were not charged.

Hankison was standing outside Taylor's apartment and fired 10 rounds through a closed and curtained patio door, police have said. The police chief ordered his termination months after Taylor's death, saying some of his rounds penetrated a neighboring apartment and endangered the lives of its three occupants, according to the police department.

"I find your conduct a shock to the conscience," the chief wrote in a letter to Hankison. "Your actions have brought discredit upon yourself and the Department ... and demands your termination." Hankison is appealing his termination. At the time, Hankison's attorney did not respond to calls and emails from CNN.

Mattingly and Cosgrove have been placed on administrative reassignment. Hankison is appealing his termination.

According to a news release from the attorney general, state police could not identify which officer fired the shot that killed Taylor, but FBI analysts determined it was a bullet from Cosgrove's gun.

None of the officers wore body cameras, the police department said, because they were plainclothes narcotics officers.

Mattingly was the first to enter Taylor's apartment. He could make out a man and a woman in the darkened hallway, he told investigators, and the man had a gun in his hand.

"I remember seeing the barrel," Mattingly said in a statement.

Mattingly's attorney, Todd McMurtry, has defended his client's conduct saying the officer "was following orders of superior officers, was not involved in the planning process of the arrest, and at all times followed established police procedures."

In a mass email to the department, Mattingly defended his actions and slammed the city's leadership.

"I know we did the legal, moral and ethical thing that night," Mattingly wrote in the email. "It's sad how the good guys are demonized, and criminals are canonized."

He was named as a special prosecutor in the case in May after Jefferson County Commonwealth's Attorney Tom Wine cited a conflict of interest.

In late August, Cameron tweeted that teams representing his office and the FBI had met to review the ballistics report in Taylor's death.

Cameron is the first African American to hold the post and a rising star in the Republican Party. He received praise from President Donald Trump and a coveted speaking spot at the party's convention last month, where he referenced the protests spurred by Taylor's death.

"Even as anarchists mindlessly tear up American cities while attacking police and innocent bystanders, we Republicans do recognize those who work in good faith towards peace, justice and equality," he said. "In fact, it was Gen. Dwight Eisenhower, a future Republican president, who said democracy is a system that recognizes the equality of humans before the law."

Cameron, the first Republican to be elected Kentucky attorney general in seven decades, is a protégé of Senate Majority Leader Mitch McConnell. He served as McConnell's general counsel from 2015 to 2017, a role that included leading Supreme Court Justice Neil Gorsuch's confirmation process.

In mid-August, Cameron met with Taylor's family for the first time, more than 150 days after Louisville police killed her in her home. His office said he was "grateful" to hold the meeting, which included Taylor's mother, Tamika Palmer, sister, aunt, family attorneys and a local activist.