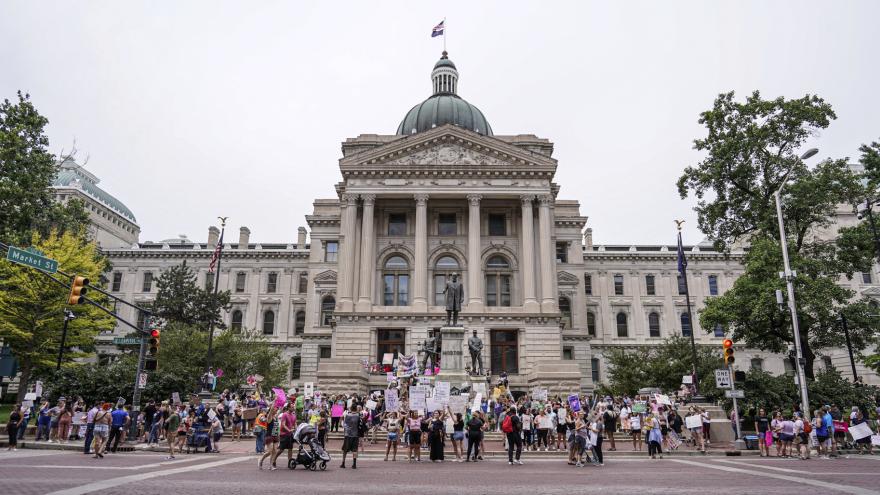 (CNN) -- The overturning of Roe v. Wade gives the green light to Republican-led states to pass stricter abortion laws, and several legislatures, rather than wait for the traditional legislative season to begin in the fall, are calling extraordinary sessions this summer to immediately take action.

Lawmakers in Indiana and West Virginia have met this week to debate new bills that would curtail the procedure, and other Republican leaders have publicly indicated that they will meet over the coming weeks. Several Democratic-led legislatures have also reconvened -- in order to pass new protections for abortion rights that they now see under threat.

These states are potentially next to hold special sessions on abortion this summer.

Republican Gov. Asa Hutchinson has already called for an extraordinary session the week of August 8 to address tax relief. Hutchinson told reporters earlier this month that abortion may be a potential topic for the session, according to local reports.

Arkansas bans providers from performing abortions "except to save the life of a pregnant woman in a medical emergency" and makes no exceptions for instances of rape or incest.

Ahead of the court's ruling, Hutchinson told CNN in May that Arkansas' near-total abortion ban he had signed in March 2021 should be "revisited" to provide exceptions for cases of rape or incest.

Nebraska Gov. Pete Ricketts, a Republican, told CNN in May that he would call a special session of his state's unicameral legislature to pass a total ban on abortion if the Supreme Court overturned Roe, which it did in June.

Abortion is allowed in Nebraska up to 20 weeks post-fertilization, with exceptions for saving the life of the mother or a "irreversible physical impairment of a major bodily function."

On the day the Supreme Court handed down its ruling, Ricketts said in a statement that he "will be working with our legislative leaders to determine what more we can do to protect our preborn babies."

Speaker Mike Hilgers said in statement that he anticipates that the legislature "will be in special session this summer to pass legislation to protect pre-born babies," WOWT reported.

"I will work with Governor Ricketts on the timing of a special session. And, after reviewing the Supreme Court's opinion in detail, I will work closely with the Governor and my legislative colleagues on the scope of such protections," Hilgers said.

CNN has reached out to Ricketts and Hilgers for updates as to a potential special session.

The state is likely to head into special session as state legislators are currently working on legislation that would ban most abortions.

South Carolina currently bans abortion once a "fetal heartbeat" is detected, which can be as early as six weeks of pregnancy, with exceptions for the life of the mother, rape or incest.

A special House committee held a public hearing earlier this month and put together a "working draft" of a bill that would ban abortion at every stage of pregnancy and eliminate the exception for cases of rape and incest. The bill would allow "any legitimate health care procedure necessary to prevent the death or serious bodily impairment of the mother," the committee chairman John McCravy said during a July 19 meeting.

The draft bill now heads to the House Judiciary Committee.

Lawmakers passed a resolution concluding their regular session that would allow the Senate president and House speaker to call them into a special session between July 1 and November 13 to consider abortion legislation.

Illinois is one of the few blue states that plans to hold a special session intended to pass legislation aimed at protecting abortion access.

The state, where Democrats hold power of the state legislature and the governorship, in 2019 enacted a sweeping abortion access protection bill.

In a joint statement on July 5, Illinois' Democratic leaders -- Gov. J.B. Pritzker, Senate President Don Harmon and House Speaker Chris Welch -- said they "plan to work closely together for the remainder of the summer to assess every possibility of what we can do and convene a special session in the coming months."

"As we build on Illinois' nation-leading abortion protections and access, it is essential to bring lawmakers and advocates into the room to continue to work together," they said. "In the coming weeks, as the ripples of the decision to overturn Roe are felt throughout the nation, we expect to get an acute sense of our needs and how Illinois can play an even more vital role in standing up for reproductive freedom."

Illinois would join New York and Wisconsin, which have already held special sessions related to abortion.

Ahead of the Supreme Court's ruling, Wisconsin Gov. Tony Evers, a Democrat, called a special session on June 22 to repeal the state's 19th century abortion ban. Republican legislative leaders, however, started and immediately ended the special session without considering the governor's request.

After the Supreme Court handed down its decision, New York Democratic Gov. Kathy Hochul brought state lawmakers back to Albany to begin the process of enshrining abortion rights.

The Democratic-led legislature on July 1 passed a constitutional amendment that, once passed, would enshrine the right to abortion in the state constitution. Lawmakers would need to pass the amendment again in next year's legislative session for it to be sent to voters.