These are the hotshot firefighters leading attacks against California wildfires. And they're quitting 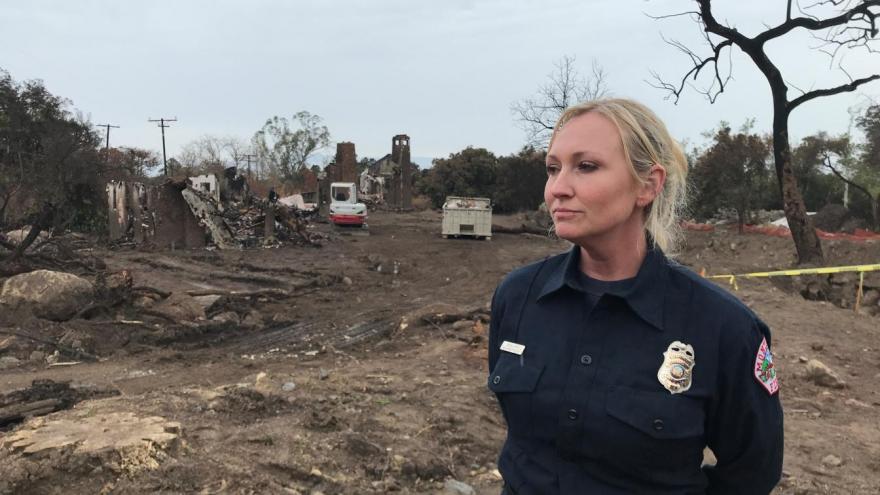 Montecito Fire Department supervisor Maeve Juarez in front of the devastation left behind by a 2018 mudslide.

(CNN) -- A swirling tornado of flames reaching 40,000 feet into the sky tore through a California city in 2018, leaving a veteran hotshot firefighter horrified.

"You are in a fog and expecting death or disaster around every corner ... It collectively killed my hotshot spirit," Humphrey, 44, said of the fire tornado.

"Hump," as fellow firefighters and friends call him, supervised hotshot crews from the US Forest Service on blister-inducing hikes to dig out fire lines, hack down trees and set blazes to fight advancing flames. Hotshot crews of 20 to 22 people spearhead fire attacks, and it's not uncommon for them to hike 10 miles daily with fire gear packs that can weigh up to 45 pounds.

Hump rose up from a seasonal rookie firefighter to the prestigious position of supervisor of the Eldorado Hotshots. He called it the "best job in the world."

But he quit a year ago.

After 25 years, Hump says he became just the latest mentally fried, underpaid hotshot veteran to leave, at a time when California wildfires are at their worst.

Hotshots are leaving for better pay

The pay discrepancy between federal hotshots, most of whom are employed by the US Forest Service, and firefighters for other jurisdictions is staggering.

First-year federal hotshots make $13.50 an hour, according to David Alicea, vice president of the Forest Service Union in California.

"Yes, you can make overtime, but we're putting them through the meat grinder," Alicea told CNN. "We're abusing them because we are short-staffed, and they are not getting their rest periods. They get laid off when fire season is over, and they choose not to come back."

"We have experienced staffing challenges as a result of issues such as compensation, remote and hard-to-fill duty stations, a competitive employment market, and the physical and mental stress of year-round fire conditions on fire personnel," Regina Corbin, a spokeswoman for the US Forest Service, told CNN via email.

She says the problems are not new and apply to other federal firefighters.

"We're down engine crews," he said. "I know of three or four forests that are down staffed."

He estimates they are missing hotshots in 35 key positions this summer in California.

California Sen. Dianne Feinstein pressed the US Forest Service in a May hearing on how it can stop losing hotshots to other places offering bigger salaries.

"We have 19 million acres [of California forestland] under federal jurisdiction," Feinstein said in the May 26 hearing on Capitol Hill. "State pay is $70,000, that's what Cal Fire pays to a state firefighter. The United States Forest Service pays $38,000."

On Wednesday, Senators Feinstein and Alex Padilla of California, Kyrsten Sinema of Arizona and Steve Daines of Montana wrote a letter proposing a plan to raise federal firefighter pay. They are asking the Subcommittee on Financial Services and General Government to include it in the 2022 funding bill, according to the letter.

Fires are getting fiercer

Experts fear another terrible wildfire season -- possibly worse than 2020, the most active fire season that California has ever recorded. The prolonged drought in the West is also fueling the fires, just one of the ways climate change is compounding the crisis.

The recent fires are part of a larger trend in California.

The seven largest wildfires in state history happened within the last four years, according to Cal Fire. The Carr Fire, which changed Hump's perspective on his work, ranked as the 12th largest fire in state history.

The increase in California's wildfire intensity and acres burned can only be explained by factoring in climate change, according to a recent analysis of several peer-reviewed studies. Land management plays a role in the trend, experts say, but it alone cannot explain why the state's fires have become so much more destructive.

On top of fiercer fires, an unrelenting drought and another big fire season on the horizon, California is losing hotshots, the rock star firefighters with the track records to successfully fight these mega blazes.

"I needed to be home with my family," Hump told CNN. "The level of stress I was bringing home (from massive fires) -- I didn't even recognize myself anymore."

Hump, a married father with three children -- ages 12, 10 and 8 -- now works for Pacific Gas and Electric, as a lead on the utility's safety infrastructure protection team.

Hump says he's paid at least $40,000 more annually than what he made before as a hotshot supervisor. The money comes with peace of mind, as he now attends all of his children's events, even coaching some flag football.

There are hotshot shortages across the country, but California hotshots are getting hit harder, according to Jonathan Miller, chairman of the National Forest Service Firefighters Union.

"We've seen some attrition across the federal crews and engines, but nothing like the shortages in California," Miller said.

When a hotshot crew isn't big enough, it's harder to fight fires, Hump says. Smaller crews can't split up into small squads or help teams with special missions as effectively.

Members with particular qualifications are required to be called a hotshot crew, which were nicknamed for fighting the hottest fires. These crews are trained to tackle "strategic and tactical wildfire assignments," according to the US Forest Service website.

Two crews, Modoc and Horseshoe Meadow, are operating as even lesser-staffed firefighting modules.

"I have five irons in the fire right now," McIlhargie told CNN. "I'm looking for something that will work for my family more. And my wife knows that I'm tired of waiting for the forest service to give me a commensurate salary to what other departments pay."

The father of two boys, 7 and 10, McIlhargie lives an hour outside Sacramento. He described feeling "wiped out" and "frustrated" by battling the recent streak of super fires.

McIlhargie, 39, says there are just not enough firefighters to take on massive blazes such as the ones that ravaged Northern California last year.

He says the Eldorado Hotshots spent a month trying to stop the largest wildfire in California history, the August Complex fire, which scorched more than 1 million acres.

The years in fire battle wear down the hotshots from helmet to boots, McIlhargie says.

"My knees ache every day," he said. "My rotator cuffs are ratchety and clicky from swinging tools and carrying cans (used for backfire fuel) and carrying saws and carrying your (back) pack."

"Your range of movement in your hips starts to go," McIlhargie said.

"It used to be for us hotshots we are up in the mountains, the back country fighting these fires," McIlhargie said. "Now it seems that every single fire has some element of wild land fire meets urban interface."

Maeve Juarez spent a year as a Redding Hotshot in 2004.

The 41-year-old mother of two left her US government job as a battalion chief in the Los Padres National Forest four years ago.

"I left because I took a higher paying job with the Montecito Fire Department that allowed me to spend more time with my kids, and it's less stress," she said.

Juarez says the pay is significantly higher in her new role as wildfire specialist in Montecito.

Because of her experience, Juarez serves as an operations section chief on major fires, a sort of general directing fire troops from many agencies.

"These hotshot supes know the terrain, what type of brush is burning, how it burned in an area in the past," Juarez said. "They are a big part of our decision making, strategy and tactics on fighting fires."

She added: "When a veteran superintendent leaves, we lose that experience, and they are our backbone."

Hump recalls his hotshot decades, visions of firefights, falling trees, crew members seriously burned and hotshots dying. He helped set up a memorial service in Arizona for the 19 Granite Mountain Hotshots killed when a fire burned over them eight years ago.

"It's this feeling of doom, that every fire you go to you are going to lose someone you care about," Hump said. "It's terrifying. It's hard to communicate with your family because you don't want to scare them. You just hug them and never want to leave."

Leaving behind the doom of that deadly fire tornado in 2018, Hump is looking ahead to this Fourth of July do something he's never done before.