These are the gun control laws passed in 2022 so far 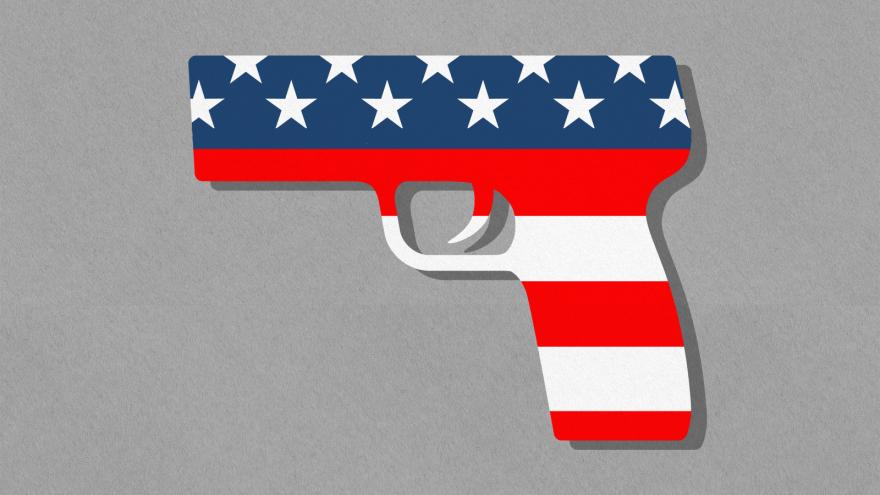 (CNN) -- Several mass shootings and a sustained rise in gun violence across the United States have spurred law enforcement officials and lawmakers to push for more gun control measures.

There is a direct correlation in states with weaker gun laws and higher rates of gun deaths, including homicides, suicides and accidental killings, according to a January study published by Everytown for Gun Safety, a non-profit focused on gun violence prevention.

Not everyone agrees that increased gun control is the answer. Some Americans advocate for their right to keep and bear arms, enshrined in the Constitution, while others argue that gun control measures save lives and do not infringe citizen rights.

Amid the debate, some lawmakers have forged ahead with passing gun control laws.

"Following the passage of the first federal gun safety legislation in nearly three decades, policymakers across the country are heeding our call for action," said Monisha Henley, senior director of State Government Affairs at Everytown for Gun Safety. "We are seeing real momentum for gun safety at the state level, but there is still far more to be done."

Here is a summary of the state and federal laws that have been approved in 2022:

On June 25, Biden signed into law the Bipartisan Safer Communities Act after the the House and the Senate approved the measure. The package represents the most significant federal legislation to address gun violence since the expired 10-year assault weapons ban of 1994.

"God willing, it's going to save a lot of lives," Biden said at the White House as he signed the bill.

Red flag laws, approved by the federal measure, are also known as Extreme Risk Protection Order laws. They allow courts to temporarily seize firearms from anyone believed to be a danger to themselves or others.

The legislation encourages states to include juvenile records in the National Instant Criminal Background Check System, which would provide a more comprehensive background check for people between 18 and 21 who want to buy guns.

It also requires more individuals who sell guns as primary sources of income to register as Federally Licensed Firearm Dealers, which are required to administer background checks before they sell a gun to someone.

California was ranked the top state in the nation for gun safety in 2021. It has the strongest system in the nation for removing firearms from people who become prohibited from having them, according to the Giffords Law Center to Prevent Gun Violence.

California Gov. Gavin Newsom in July signed a package of five bills on gun safety after they were passed by the California State Senate.

On July 1, Newsom signed AB 2571, which prohibits the gun industry from marketing firearm-related products to minors, as well as AB 1621, which further restricts ghost guns, including the parts used to build them.

Also included in the package is AB 2156, signed on July 21, which cracks down on the manufacture of firearms by prohibiting any person, regardless of federal licensure, from manufacturing firearms without a state license. It also prohibits unlicensed individuals from using 3D printing to manufacture any firearm or precursor part.

The last bill, signed on July 22, is SB 1327. It allows private citizens to bring civil action against anyone who manufactures, distributes, transports or imports assault weapons or ghost guns, which are banned in the state.

The law prohibits a person from openly carrying a firearm within any polling location or central count facility.

It also bans individuals from open carrying within "100 feet of a ballot drop box or any building in which a polling location or central count facility is located," while election activity is in progress, according to the legislation. Violations are punishable by a maximum $1,000 fine, up to 364 days imprisonment in the county jail, or both.

The Delaware Lethal Firearms Safety Act of 2022 prohibits the manufacture, sale, offer to sell, transfer, purchase, receipt, possession or transport of assault weapons in Delaware, subject to certain exceptions, according to HB 450.

The package also includes legislation that would raise the minimum age requirement to purchase or possess a firearm from 18 to 21, ban the use of devices that convert handguns into fully automatic weapons and hold gun manufacturers and dealers "liable for reckless or negligent actions that lead to gun violence," the bill states.

On May 18, the governor signed HB 4383, which prohibits individuals from selling or possessing ghost guns and ensures that all firearms are serialized, allowing law enforcement to better trace them.

Maryland Gov. Larry Hogan announced on April 8 that he would allow Senate Bill 387, which bans the sale or possession of ghost guns, to become law without his signature, noting that it doesn't go far enough in taking "decisive action to hold violent criminals accountable."

The bill, which took effect on June 1 after bipartisan support, expands the definition of "firearm" to include an unfinished frame or receiver. It requires the Secretary of State Police to maintain a system to register firearms imprinted with serial numbers and "prohibits a person from purchasing, receiving, selling, offering to sell, or transferring an 'unfinished frame or receiver' or a firearm unless imprinted with specified information," the bill states.

The law also requires the governor to allocate $150,000 in the annual state budget to fund registration proceedings.

New Jersey Gov. Phil Murphy on July 5 signed seven gun safety bills, six of which were part of his Gun Safety 3.0 package that he introduced to the state legislature in April 2021.

The package includes legislation that would allow the state's attorney general to sue members of the firearm industry for violations that stem from the sale or marketing of firearms, the bill states.

Also included in the package is legislation that would regulate the sale of handgun ammunition, developing a system of electronic reporting of these sales; and require training prior to the issuance of a gun purchaser identification card with a validity date of 10 years.

Another bill that was signed as part of the package mandates firearm owners who become state residents to obtain a Firearm Purchaser Identification Card and register out-of-state acquired handguns, according to the bill.

Gov. Kathy Hochul signed a package of bills and an additional piece of legislation to address a wide range of gun safety issues.

Hochul signed a gun safety package on June 6, which includes bills that require microstamping on handguns, strengthen the state's extreme risk and firearm purchase permit law, raise the minimum age to purchase semiautomatic rifles to 21 and enhance information sharing between state, local and federal agencies when guns are used in crimes.

Following the Supreme Court decision on June 23 to strike down a New York gun law enacted more than a century ago that places restrictions on carrying a concealed handgun outside the home, Hochul signed legislation to strengthen the state's gun laws and bolster restrictions on concealed carry weapons.

The law, which takes effect on September 1, will expand eligibility requirements in the concealed carry permitting process, restrict the carrying of concealed weapons in sensitive locations and establish state oversight over background checks for guns and regular checks on license holders for criminal convictions, according to the legislation.

Rhode Island Gov. Daniel McKee signed three gun safety bills on June 21. They prohibit high-capacity magazines, ban the open carry of rifles and shotguns in public and raise the legal age to purchase firearms or ammunition from 18 to 21, with exceptions for law enforcement officers.

One of the bills also changes the definition of "rifle" and "shotgun" consistent with federal law.

Vermont Gov. Phil Scott signed into law a package on March 25 that bans firearms from hospital buildings and prohibits the transfer of firearms between unlicensed people.

The governor vetoed a similar bill, S.30, in February that would have closed the "Charleston Loophole," which allows gun purchases to move forward by default after three days even if a background check has not been completed.

The new law, S.4, addresses the policy by extending the time period to seven days for the federal government to complete a background check before an individual can purchase a firearm. It also strengthens protections for victims of domestic violence, according to the bill.

HB 1705 prohibits the manufacture, sale, purchase or possession of ghost guns, while HB 1630 prohibits the open carry of firearms at local government meetings and restricts them at school board meetings and election-related locations.

The third bill, SB 5078, prohibits high-capacity magazines, defined as an "ammunition feeding device with the capacity to accept more than 17 rounds of ammunition," the bill states.