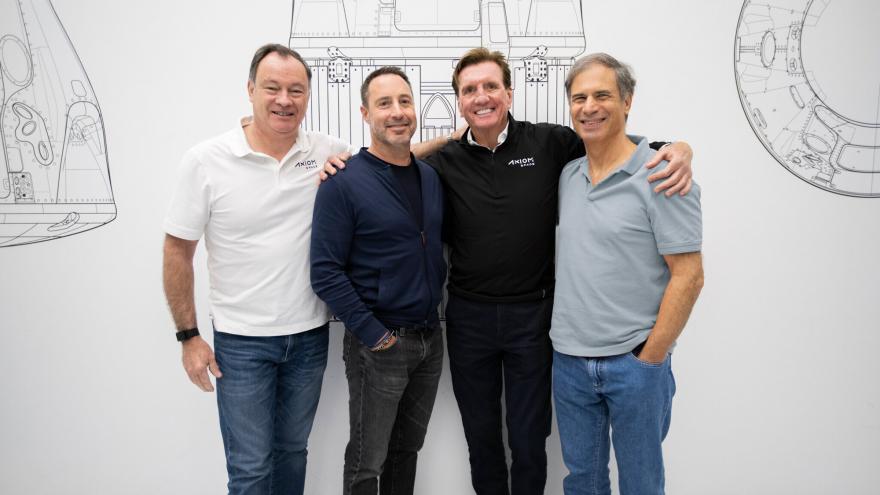 (CNN) -- SpaceX is heading back to the launch pad, this time to put a group of four private citizens into orbit for a first-of-its-kind trip to the International Space Station.

The trip was put together by Axiom Space, a private startup that's booking rides with SpaceX and coordinating flights to the ISS for anyone who can afford it.

The passengers on this trip — which includes former NASA astronaut Michael Lopez-Alegría, who will command the mission as an Axiom employee, and three paying customers — are slated to take off from Kennedy Space Center in Florida on Friday at 11:17 am ET. They'll ride inside a SpaceX Crew Dragon capsule, the same capsule that SpaceX has used to carry NASA astronauts to the ISS already. The capsule rides to orbit on top of one of SpaceX's 230-foot-tall Falcon 9 rockets.

This mission, called AX-1, will mark the first time in history that private citizens, or otherwise non-professional astronauts, will launch to the ISS from US soil. And it's the first of what Axiom, the company that organized and brokered this mission with SpaceX, hopes will be many similar flights for anyone who can afford it.

The AX-1 mission is also only the second space tourism flight for SpaceX, following up the September 2021 launch of four private citizens on a three-day, freeflying trip through orbit that traveled even higher than the ISS.

During their eight-day stay on the space station, the AX-1 crew will conduct some science experiments, break bread with the professional astronauts already on board the football-field sized space station, and enjoy sweeping views of our home planet whisking by down below.

Who's on this mission?

Lopez-Alegría, 63, took of four trips to space between 1995 and 2007 during his time with NASA. He left the space agency in 2012, and he joined Axiom a few years later with the aim of going back to space — but as a private astronaut rather than an official member of the corps.

Axiom serves as an intermediary between paying customers who want to take a multimillion-dollar thrill ride to space, booking flights with SpaceX, handling negotiations with NASA, and taking over the training for the would-be space travelers. Axiom hopes to make these flights a regular occurrence, as NASA agreed a few years ago to open up the ISS to space tourism and other commercial ventures.

It's not clear how much these trips cost the customer. Though previously disclosed prices indicated a trip to the ISS is $55 million per seat, Axiom declined to confirm that figure this week. "Axiom Space does not disclose financial terms," Axiom spokesperson Bettina Inclan told CNN Buisness via email.)

There are three paying customers on this flight. They are all wealthy white men, continuing a trend plaguing the commercial spaceflight sector and its inaccessibility to more diverse swaths of the population. The vast majority of people who have thus far been able to afford to pay their way to space — whether on SpaceX flights or suborbital missions like those offered by Blue Origin — have been white businessmen. It's indicative of just how far the reality is from the promised far-off space dream that comes from entrepreneurs who claim that space is "for everyone" and commercializing space will "democratize it" amid ballooning income inequality. With price points this exuberant, space will remain commercially accessible only to the elite few for the foreseeable future. Though the aim is to eventually drastically reduce the cost of getting to space, hopefully making ticket prices affordable for more people, it's not clear how or when that will happen.

Larry Connor, 72, is a real estate tycoon from Dayton, Ohio. He founded The Connor Group, which has developments in 16 markets across the country and has more than $3.5 billion in assets, according to the company's website. He's an avid adventurer, having raced cars and climbed mountains.

He also has experience as a private pilot and has participated in aerobatic competitions, and he'll be the designated pilot for this mission. (It should be noted SpaceX's Crew Dragon is fully autonomous, though spaceflight pilots train to be prepared to take over is something goes awry.)

"My journey really started seven or eight years ago. I've always been interested in space, and I started thinking about after I read about an American who went to Russia and went on the Soyuz [spacecraft]," he said in an interview with the Dayton Society of Natural History last year, after his plans to fly on AX-1 were revealed.

Connor was likely referring to one of the US citizens who booked a flight to the ISS through Space Adventures, a company that has booked seats aboard Russian Soyuz spacecraft for tourists going back to the early 2000s. Those flight have always been coordinated with the Russian space agency and included official Russian astronauts. The AX-1 mission will be the first to include a crew made up entirely of private astronauts.

Connor said he decided to book the mission for "the challenge."

"We are going to truly train to the professional astronaut standards," he said.

Mark Pathy, 52, is the founder and CEO of the Canadian investment firm and family office Mavrik Corp. It's website states that Mavrik has a "particular focus on innovation, entrepreneurship, and responsible investing," though not many of its investing decisions are public.

Pathy is also the former CEO of a shipping company, Fednav, which is a Pathy family business.

Of the AX-1 mission, Pathy told CTV News: "It is a lot of money. I feel very fortunate to be able to afford this kind of trip. Obviously not many people can. But at the same time I don't have to, fortunately, choose between doing something like this or being active philanthropically."

He added that it's "been a dream since I was a little kid and watched Captain Kirk bouncing around the universe in the Enterprise" to go to space.

Eytan Stibbe, 64, is an Israeli businessman.

According to his Axiom bio, Stibbe, a former fighter pilot in the Israeli Air Force, founded Vital Capital a decade ago. Its website states the company invests in companies involved in sectors like food and healthcare across developing areas, notably across Africa, for "high-return opportunities."

Axiom says that Stibbe's journey is happening "in collaboration" with the Ramon Foundation, a space education non-profit named for Israel's first astronaut, Ilan Ramon, who died in the Space Shuttle Columbia disaster in 2003. Stibbe's Axiom bio also says he and Ramon shared a "close" friendship. Stibbe will be only the second Israeli to go to space.

He announced his decision to join the AX-1 crew at a ceremony at the Israeli President's Residence in 2020, and it was met with criticism from Israeli press, which pointed to alleged dealings in Stibbe's past, particularly related to accusations of trafficking military equipment during his time with LR Group, an investment and development group and which he left in 2011, according to a representative for Stibbe.

Specifically, reports allege that Stibbe was involved in the sale of military aircraft in Angola, which was embroiled in a brutal civil war from the 1970s through 2002.

The allegations trace back to reporting from Israeli news site Haaretz.

In a television interview from 2012, which was conducted in Hebrew and translated by Israeli news outlets and CNN Business, Stibbe also appeared to confirm his involvement.

"We helped Angola end the war by bringing them interceptor aircraft, two Su-27 fighter planes, from Uzbekistan," he said. "Their presence in the country stopped the flights that were supplying weapons, food and ammunition and the export of illegal diamonds from Angola. After one, or one and a half years, the war ended."

It adds that LR Group "received a request from the [US-backed Angolan] government to help upgrade its airspace infrastructure to ICAO international standards," and that the aircraft sales were made "with export licenses and were completely legal."

"In addition, the aircraft and air-control radars were used for deterrence purposes only," the statement reads.

LR Group responded in a statement to CNN Business, saying "LR Group has been involved in the fields of health, telecommunications, food, agriculture, renewable energy and water, with the aim of developing the independence and economic and social well-being of local populations around the world."

LR Group is currently involved in a legal dispute pertaining to allegations against Stibbe dating to when he was a partner at the company.

Stibbe's representatives declined to comment on the legal battle.

As for his decision to go to space, Stibbe said "as a kid on dark nights I used to watch the stars and wait patiently to see a shooting star, and I asked myself, What is there beyond what the eyes see?" he said in comments translated by i24NEWS.

With his launch slated for this week, Stibbe will soon find out.