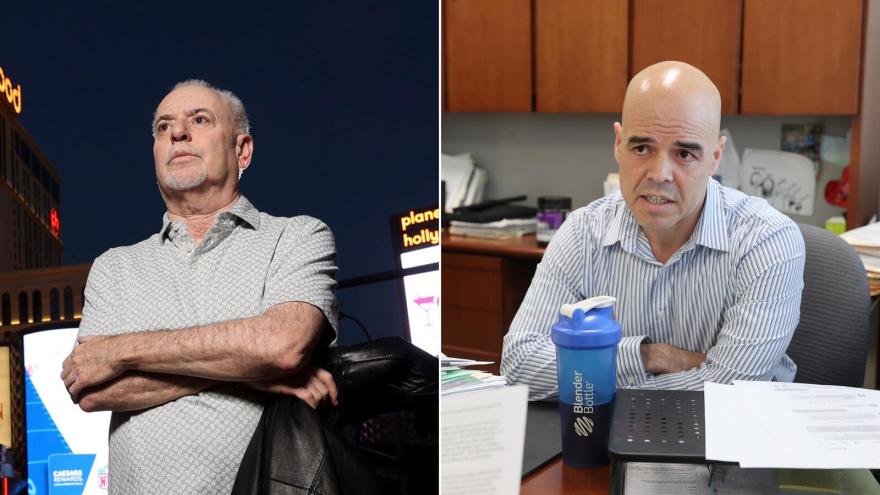 Jeff German (left) host of "Mobbed Up," poses on the Strip in Las Vegas, in June of 2021. Clark County Public Administrator Robert Telles (right) is pictured in his Las Vegas office on May 11.

(CNN) -- Before he was found dead outside his Las Vegas home last weekend, veteran investigative journalist Jeff German had written a series of stories about former Clark County Public Administrator Robert Telles, including a piece he was writing about Telles at the time of his death. German's reporting uncovered claims of bullying within Telles' office, as well as an alleged inappropriate relationship.

Though he has not been publicly linked by police to German's death, Telles is being held on suspicion of murder, Las Vegas Metro Police Sheriff Joe Lombardo told the Review-Journal Wednesday. CNN has reached out to the Las Vegas Metro Police Department and to Telles' office and is working to determine his legal representation.

Below are some of the stories German wrote about Telles for the Las Vegas Review-Journal.

County office in turmoil with secret video and claims of bullying, hostility -- May 16, 2022

"The Clark County Public Administrator's office has been mired in turmoil and internal dissension over the past two years, with allegations of emotional stress, bullying and favoritism leading to secret videotaping of the boss and a co-worker outside the office.

A half-dozen current and former employees interviewed by the Review-Journal are alleging the hostile work environment was fueled by the elected administrator of the office, Robert Telles, carrying on an 'inappropriate relationship' with a staffer that has harmed the office's ability to deal with the public in overseeing the estates of those who have died."

In a rare move, consultant hired to resolve turmoil in county office -- May 26, 2022

"In a rare move, top Clark County managers have hired a former coroner to tackle friction in the public administrator's office after multiple claims of bullying and favoritism.

Michael Murphy was brought in to ease the turmoil following a Review-Journal story revealing hostile workplace complaints against Public Administrator Robert Telles. Co-workers accused Telles of carrying on an 'inappropriate relationship' with a staffer, including secretly videotaping Telles in the backseat of the staffer's car.

Telles, who is running for reelection, has denied the allegations and blamed the upheaval on 'a handful of old-timers.'"

"The re-election of embattled Clark County Public Administrator Robert Telles is in jeopardy after a lackluster showing in his primary battle with two Democratic challengers, including his top assistant.

Telles' lagging numbers follow a Review-Journal investigation last month that uncovered an office in turmoil and claims of bullying, retaliation and an 'inappropriate relationship' between Telles and a staffer."

'At this point, I do believe I will lose this race, and I am looking forward to going back to the practice of probate law where I can continue to help families,' Telles wrote in a statement on his campaign website.