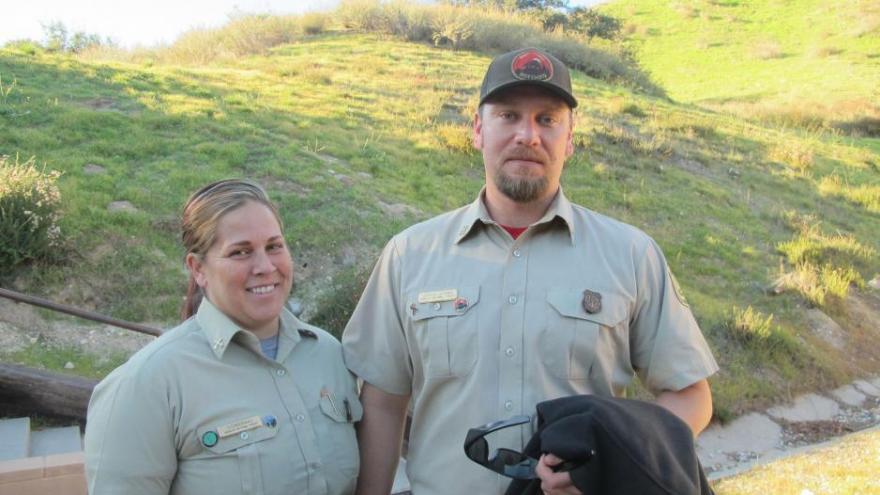 Danielle Cardenas and Josh Thomas are a husband and wife team headed to fight fires together from the Angeles National Forest.

(CNN) -- As massive blazes continue to ravage parts of Australia, 20 seasoned firefighters from California are on their way to help battle the flames.

It's not the first time the countries have helped each other out. Australia and New Zealand have been sending firefighters to the United States for more than 15 years, the Forest Service says. Most recently, 138 firefighters arrived to help in the US in August 2018, a federal spokeswoman said.

"None of us have have ever fought fire over there," she said. "Any time you go into a different environment where you're not familiar with the topography and the fuels or even the weather, you have to be on edge a little bit."

For other firefighters, the challenge may be what they're leaving behind.

Hector Cerna, is a husband and father. For him, getting everything sorted before he leaves was a priority.

"Trying to settle everything I have at home, make sure everything is okay, everything is right, the balance is there and then once that's done, it gives me more peace of mind to do what I have to do for a month."

This team isn't the first group of firefighters the US has sent over this fire season. Throughout December, the US "has intermittently deployed more than 74 wildland USFS (US Forest Service) and DOI (Department of Interior) fire personnel," the National Interagency Fire Center said.

"As the extreme fire danger continues across Australia, the Department of the Interior will continue to do all that we can to support requests for assistance," Department of the Interior's Office of Wildland Fire Deputy Director Craig Leff said in the statement. "Our focus remains on helping the people of Australia and keeping people safe in these unprecedented conditions."

What they'll be doing

For these firefighters going in, exactly what they'll face is still unknown.

They'll be briefed by Australian forces as soon as they land about the hazards and the current situation, Garcia said.

In Australia, about 2,700 firefighters are already on the front lines. The fires have so far scorched more than 14.7 million acres of land, destroyed more than 1,300 houses just in New South Wales and killed about half a billion animals, according to one estimate.

This 20-person handpicked team is trained to hit the ground running.

One part of their work this time will be sawing down trees, said Angeles NF firefighter Jackie Ortega, who's been with the service for 21 years.

"That's part of removing some of the fuel so you can get down to mineral soil, that way there is no advancement of the fire whether it will be laterally or forward process."

Some of those needed materials will likely be provided by Australian forces, said firefighter Josh Thomas. He's a Bear Divide Hotshot -- in other words, comes with some of the most extensive training in wildfire suppression tactics.

"It's just not convenient for us to be transporting chainsaws on the flight to Australia," Thomas said. Thomas is Cardenas' husband. They'll be going to Australia together.

And that's why they've packed lightly, he said, hoping to find all the tools they needed on the other side of the ocean.

Why they're doing it

The dangers didn't deter the team from volunteering.

"Just seeing the amount of destruction that's happening and knowing that they need help makes you want to volunteer," Cardenas said. "It is 30 days for us probably and so that's a little bit of time away from home but it's worth it in the long run."

It's what they love to do.

And for others, the opportunity for experience wasn't one they could pass up.

"A lot had to do with the experience that you're able to get with going to a different country and learn how do they fight fire ... and try to share with the rest of the firefighters out here, "Cerna said. "Maybe learn different tactics that we never thought of and gaining knowledge really of firefighting."