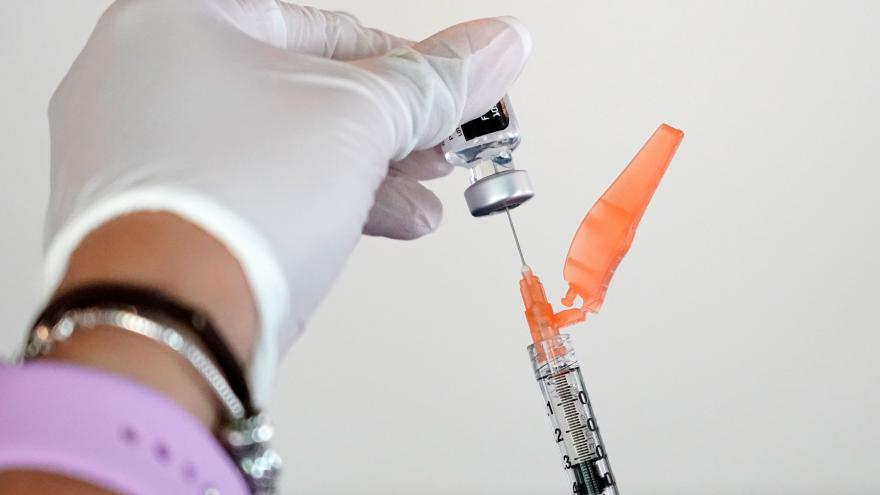 (CNN) -- With a surge in new Covid-19 cases and hospitalizations, health officials and state leaders have ratcheted up their calls for the public to be vaccinated before winter arrives while the US Centers for Disease Control and Prevention has approved booster shots for an expanded number of Americans.

Despite the appeals, the average rate of new vaccinations has declined this month, according to CDC data.

Around 55% of all Americans are now fully vaccinated, a course of action that has been consistently demonstrated both in studies and real-world evidence as the best method to protect against Covid-19. But the acceptance of inoculations remains checkered, largely depending on the region.

Utah on Thursday became the 32nd state to fully vaccinate at least half of its residents against Covid-19, according to CDC data.

The state with the highest rate of vaccination is Vermont at 69% of all residents, followed by Connecticut, Rhode Island, Massachusetts and New Jersey.

The differing rates of vaccinations are having a profound effect on hospitalizations and deaths.

Wyoming is seeing close to its record of hospitalizations, according to Gov. Mark Gordon's office, and Tuesday the state activated nearly 100 members of their National Guard to assist area hospitals with screening, testing and other roles.

West Virginia this week reached a record high of 1,000 Covid-19 hospitalizations, according to Gov. Jim Justice, though the state is hopeful that a recent downturn in its positive case count could signal a waning of the latest surge.

Even in states which have higher rates of inoculations, there are tens of millions of Americans who remain unprotected against Covid-19 due to lack of vaccination.

"Hospitalizations are a pandemic of the unvaccinated at this point," Scott Bookman of Colorado's Department of Public Health and Environment said Thursday. "Eighty percent of those hospitalized are unvaccinated."

Decision made on booster recommendations

Early Friday, CDC Director Dr. Rochelle Walensky signed off on an advisory panel's recommendation to authorize vaccine boosters for a broader range of people, including people age 65 and older and residents of long-term care facilities who received the Pfizer/BioNTech Covid-19 vaccine series at least six months ago, and people ages 50 to 64 with underlying medical conditions.

In addition, she diverged from the advisers by recommending boosters for those ages 18 to 64 who are at increased risk of Covid-19 because of their workplaces or institutional settings.

"As CDC Director, it is my job to recognize where our actions can have the greatest impact. At CDC, we are tasked with analyzing complex, often imperfect data to make concrete recommendations that optimize health. In a pandemic, even with uncertainty, we must take actions that we anticipate will do the greatest good," Walensky said in the statement.

People ages 18 to 49 with underlying medical conditions may also receive a booster dependent upon their individuals benefits and risks, according to the CDC.

After the US Food and Drug Administration said this week it would grant emergency use authorization for a booster dose of Pfizer vaccine for certain individuals, the CDC's Advisory Committee on Immunization Practices met Thursday on how to best implement the authorization.

It concurred boosters should be granted for people ages 65 and older at least six months after full inoculation, as well as for people at high risk of severe disease. But it had differed from the FDA over whether to authorize boosters for those at high risk in workplace situations.

The FDA's decision "reflected a balance of the safety and effectiveness data we have available, and the need to protect our society," Walensky said at a White House briefing Friday.

"It was a decision about providing, rather than withholding, access."

Booster shots to those applicable can now be officially administered.

In August, third doses of PPfizer/BioNTech vaccine were approved and recommended for people who are immunocompromised and at high risk of severe disease from Covid-19. And nearly 2.4 million Americans have received an additional dose since August 13, according to CDC data.

The FDA has not decided on Moderna's application for booster authorization, and Johnson & Johnson has not yet applied.

"I want to be clear: We will not boost our way out of this pandemic."

Walensky said as cases, hospitalizations, and deaths are increasing in unvaccinated areas, "the most vulnerable are those unvaccinated."

"If you are not vaccinated and eligible, I encourage you to get vaccinated to protect your community, your family and yourself."

Vaccines for children remain a focus

Many children are not yet eligible for inoculations, as the Pfizer/BioNTech vaccine is currently approved for people ages 16 and older and has emergency use authorization for use in people ages 12 to 15. Vaccine trials for younger children are ongoing.

While vaccines in children 5-11 may become available by the end of October, vaccination schedules mean children in this age group won't be fully vaccinated until December, National Institutes of Health Director Dr. Francis Collins said Thursday.

"You've got to go through two shots, three weeks apart, and then another two weeks after that. So if you got immunized on Halloween and you're, you know, 9 years old, it's still going to be December by the time you have that full protection," Collins said.

In Colorado, pediatric cases are higher in areas of the state with lower overall vaccination rates, according to state epidemiologist Dr. Rachel Herlihy.

Also, cases are highest in 6- to 11-year-olds who are not yet eligible for the vaccine, she said.

Not only are cases down where vaccination rates are high, but they are also down in school districts requiring masks, Herlihy said Thursday.

"The lower-case rates are associated with districts that are requiring masks in schools, again showing that masks are having and decreasing transmission in our school settings," she said.

While some political leaders have made it a point to ban any vaccine or mask mandates in their states regarding education, districts free to decide are choosing to follow through.

In California, the Oakland Unified School District's School Board voted to require Covid-19 vaccinations for eligible students ages 12 and up during a school board meeting on Wednesday.

The district, which has approximately 50,000 students in attendance, will allow for certain medical and "personal belief" exemptions from the requirement, board vice president Sam Davis told CNN.

There's currently no timeline set for when students will need to be vaccinated, but a proposal will be presented at a school board meeting next month, according to Oakland USD.

The district said it will look to the Los Angeles Unified School District, which announced its vaccine mandate earlier this month, on how best to implement the requirement.