There's a new addition at the Miami Zoo: a baby giant anteater 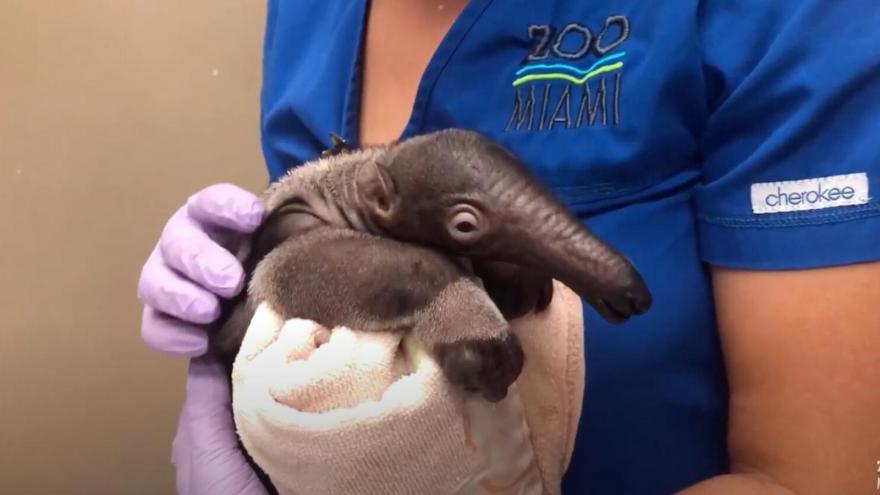 Ziggy Ebenezer, was born on December 8, the same date as its mother, at the Miami Zoo.

A male giant anteater was born December 8, its mother's birthday, the zoo said in a news release.

The arrival of Ziggy Ebenezer wasn't all smooth sailing.

On one of the coldest nights of the year in Florida, the adult female abandoned the baby in the corner of their enclosure. The newborn was weak and cold, according to zoo officials, and was immediately taken to the zoo hospital and put in intensive care.

The team did not think that Ziggy would survive. But he slowly became more responsive as he got warmer, and within 48 hours he was strong enough to be reintroduced to his mother. Still, the mother began to reject him, and Ziggy was returned to the hospital to receive care.

The zoo said he was originally tube fed but is now accepting a bottle and is fed every three hours.

"It continues to gain strength and its distinct black and white coat is beginning to grow in," the zoo said in the release.

"Zoo veterinarians are cautiously optimistic that the baby has overcome the most serious challenges of its first few days and are hoping that the improvements continue though there are still obstacles ahead as there would be for any infant in this situation."

Giant anteaters are the largest of the four species of anteaters and can reach 6-8 feet, according to the zoo's website. They are native to Central and South America and are listed as vulnerable, with their greatest threat being habitat loss.

The animal is commonly called the "ant bear" and has tongues that can be 2 feet long to lick up to 150 ants or termites a minute.

They use their strong powerful front claws to fend off predators, like jaguars, since they have no teeth.