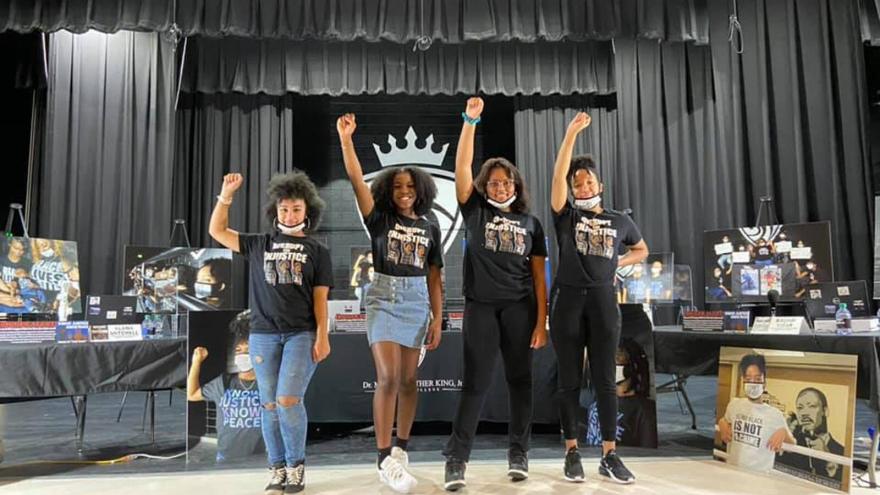 (CNN) -- Before a fateful trip to the National Museum of African American History and Culture in Washington, Alana Mitchell said she didn't feel like she was Black enough to own African American history as her own.

But she found her place in history within its walls, along with a handful of her classmates from Dr. Martin Luther King Jr. Early College, a middle and high school in Denver, Colorado.

During the high school's 2019 visit to the DC museum, students, including Alana were overcome with emotion. They felt heartbreak, anger and confusion. They were surrounded by the rich history of Black artists, politicians and activists at the museum, so why weren't they taught anything about them in class?

So Alana and her classmates made a demand to their school board -- require African American studies courses at every Denver public school, and teach Black history in every grade.

So far, they've guaranteed a course at their own school with plans for expansion. It's a victory, if an incomplete one.

In the thick of a nationwide reckoning with racism and a pandemic that's disproportionately killed Black Americans, students and faculty in local communities across the nation are demanding better Black history programs in schools. From lesson plans that lay bare the horrors of the Tulsa race massacre to literature units that center Black authors and Black experiences, young activists and their faculty supporters see an urgent need for education reform.

Black history doesn't need to be relegated to a week in February or one unit in US history, proponents say. It doesn't even need to be restricted to social studies. US schools have failed in the past to support their Black students -- now is the time, activists say, to center young Black Americans in their own stories.

Some states require Black history but it's vaguely defined

But only a few states require public schools to teach Black history, including Florida, Illinois and, since 2002, New Jersey. Most of those states don't define what should be included in those lesson plans.

Under New Jersey's "Amistad" law, named for the rebellion of enslaved Africans who rose up against their captors on a ship bound for the New World, all public schools in the state are required to teach Black history. The law requires schools in the state to teach the horrors of slavery, but districts decide how -- and what -- to teach.

The students in the African American Culture Club at New Jersey's Cherry Hill High School East want more than just a week of programming during Black History Month. They want a yearlong course as a graduation requirement.

"It's the same thing over and over," said Machayla Randall, rising senior at Cherry Hill East, of the Black History Month curriculum she is taught every year. "With other units, there's projects, and there's tests devoted just for those sections. But for Black history and African American history, there's nothing for that."

The death of George Floyd and the ensuing Black Lives Matter protests galvanized the Cherry Hill student group. Machayla said that while police brutality isn't a concern in her New Jersey suburb, she's often stereotyped or on the receiving end of microaggressions because she's Black. Those racist incidents may happen less often if their school does a better job of teaching about them, she said.

Machayla insisted, though, that they'll push district officials until they see results.

Educators who support bringing Black history into schools say visibility is critical for young Black students who haven't seen themselves in subjects before -- like Alana and her Denver classmates. If it weren't for the trip to the DC museum, the students said, they may not have ever known what they'd been missing.

"That museum kind of broke us all down," said Jenelle Nangah, a student at Dr. Martin Luther King Jr. Early College who attended the trip to the DC museum.

When the group of students came back from that trip, they formed a Black Student Association. Some members of that group, plus a few more students who weren't on the trip, decided they wanted to see Black history taught in school so younger students wouldn't have to travel across the country for the same experience.

The students presented their dream class to their school board, which approved a plan for an African American studies course at the school with plans to expand it to other schools.

Now, the course on Black history isn't only offered to only high schoolers -- middle schoolers at the school are learning about the Middle Passage and the horrors of the Transatlantic slave trade, the students said. They're also learning about African empires and the cultural impact of Black artists and creators.

Still, the expansion to other schools has been slow going. District officials told Denver magazine 5280 that developing a new curriculum takes time and resources that Denver public schools are short on, particularly during a pandemic. But the students have highlighted an undeniable need to do more and do better.

"We are not just slavery, we are not just the civil rights movement," said Angel Amankwaah, who didn't attend the trip but helped lead the charge for an African American studies class. "We are not just MLK and Malcom X, we are the Mali empire and the Ghanian empire. We are Black Wall Street. We are the Harlem Renaissance. We are beautiful and amazing things."

Why it's important to teach for Black lives

Jesse Hagopian knows a class on the history and contributions of Black people can be a success. He teaches one at a Seattle high school, and he's helping students with the Black Lives Matter at School coalition demand similar programs in their districts.

History is taught through a Eurocentric, whitewashed lens, he said, one that reduces the contributions of Black people. The omission of Black history sends a negative message to Black students that can damage their self-worth.

Too often, when history classes do cover the contributions and challenges of Black people, the accounts are inaccurate or romanticized, Hagopian said. In the instructional text he co-edited, "Teaching for Black Lives," Hagopian and his co-editors recall the time a Connecticut student found a passage in their history textbook that claimed enslaved people were often treated well by slave owners and were considered "family."

Anything short of the full, ugly story of slavery and centuries of anti-Black racism is lying to students, he said.

"All students benefit from learning about Black struggles," he said. "I think you can't tell this nation's history without telling the story of the relentless ongoing struggle for freedom that Black people have engaged with since we were brought to the shores in slave ships."

Students at Cherry Hill East and Dr. MLK Jr. Early College agreed with Hagopian -- they want a full and accurate retelling of history, one that doesn't tip-toe around the horrors of slavery.

"The whole textbook is one big euphemism," said Naomi Bereketab, of New Jersey's Cherry Hill East. "Nothing is explicitly told. And it's so dangerous because even though that might be an 'easier' way to approach students, it's not an easier way for us to live, because people don't recognize the truth."

The group of Denver students had already successfully pleaded their case to their school board when George Floyd was killed and Black Lives Matter protests revived across the US.

Their principal and adviser asked them not to protest for their safety, but they felt they needed to do something that would reach beyond their school bubble.

So they started a podcast -- "Know Justice, Know Peace: DMLK's 'The Take.'" Once a week, the group discusses current events and social justice initiatives from their perspective as young Black women. They livestream the shows from their school's YouTube channel.

It's important for schools and teachers to engage their students in discussions on the last few months of protests and violence against Black people, Hagopian said -- young people are already having conversations about these complex ideas online and with each other. Why not host difficult conversations in classrooms, too?

The Denver students said they've been fortunate that their school has heard their concerns and found solutions when students in other states have been ignored by administrators or shouted down by community members who believe an expanded Black history program is unnecessary.

"It's so important that we don't stop here just because we've met a certain standard of success," said Kaliah Yizar of Denver. "The changes that we're making at our school and our community need to be made everywhere before we can even say that our mission has been successful."

Steady improvements have been made this year alone: In February, Oklahoma leaders made it mandatory for state schools to teach the 1921 Tulsa Race Massacre, when a mob of thousands of White people burned a bustling Black community to the ground and killed hundreds of Black residents. And the widely read history textbooks from McGraw Hill may soon capitalize the "b" in "Black," a decision several news organizations made this summer, too.

Cherry Hill East's African American Culture Club is still working to make its dream class happen. They're not expecting a course to appear on school schedules overnight, but they'd like it to come soon -- Naomi and Machayla are graduating next year.

But even if they can't take the class they've fought for, if it's successfully implemented one day, they will have helped write it into their school's curriculum.