There's a lot of debate about vaccine passports right now. What are they, and how would they work? 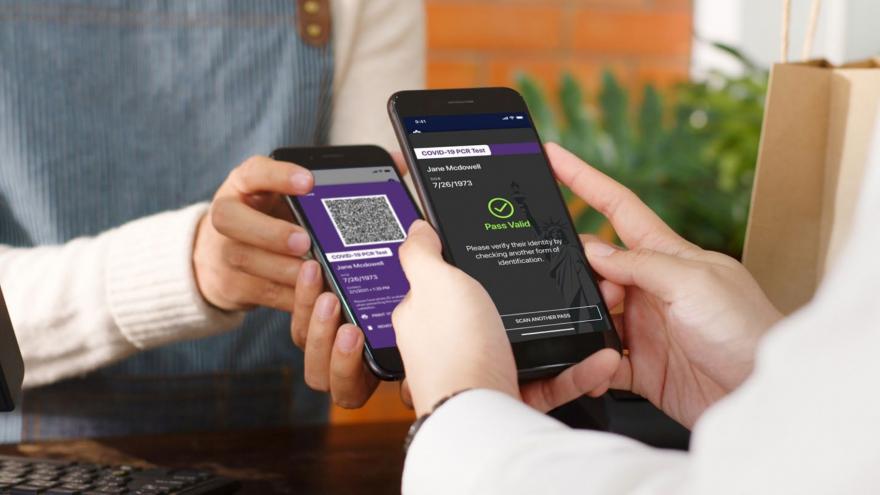 A vaccine passport could allow the bearer entrance to a venue, like a crowded concert, or a foreign country that demands proof of vaccination in addition to a visa and valid national passport.

(CNN) -- With millions of Americans being vaccinated against Covid-19 every day, a heated debate is underway -- do these people need proof of immunization in the form of a vaccine passport?

Just like a national passport, a vaccine passport could allow the bearer entrance to a venue, like a crowded concert, or a foreign country that demands proof of vaccination in addition to a visa and valid national passport.

Vaccination cards from the US Centers for Disease Control and Prevention aren't quite the same as a vaccine passport. Though they are a record of what vaccine a person got and when, they can easily be forged.

What exactly is a vaccine passport?

A vaccine passport is just proof that a person has been immunized against Covid-19. It could be in the form of a smartphone app or a written certificate, for those who don't have smartphones.

Some health experts argue that such proof of vaccination can be the ticket back to normalcy. It could reward people for getting vaccinated by allowing them into a crowded concert or ballgame, and offer them peace of mind that the person next to them has been immunized, too — thus helping to make crowded places safer.

But critics point to privacy concerns and overreach by authorities.

The governors of Florida and Texas have signed executive orders banning vaccine passports. Florida Gov. Ron DeSantis last week signed an executive order that prohibits any government entity from issuing them and businesses from requiring them of their customers.

Texas Gov. Greg Abbott this week signed an order prohibiting the state's agencies from requiring a vaccine for any service.

"Government should not require any Texan to show proof of vaccination and reveal private health information just to go about their daily lives," Abbott said in a video posted on Twitter.

There's a lot of talk and debate about the passports, but hardly anyone is issuing them yet -- though they are available in New York to vaccinated residents.

While the Biden administration has been trying to find a way toward a standard for vaccine certification, the federal government will not issue a vaccine passport, White House Press Secretary Jen Psaki said Tuesday.

"The government is not now, nor will we be, supporting a system that requires Americans to carry a credential," Psaki said at a news briefing. "There will be no federal vaccinations database and no federal mandate requiring everyone to obtain a single vaccination credential."

The Vaccination Credential Initiative -- a coalition of tech and health care companies, including Microsoft and the Mayo Clinic -- was founded just to get some sort of verification process off the ground.

"VCI's vision is to empower individuals to obtain an encrypted digital copy of their immunization credentials to store in a digital wallet of their choice," the group said in a January news release announcing its founding. "Those without smartphones could receive paper printed with QR codes containing W3C verifiable credentials."

Like it or not, people who want to travel abroad may soon be required to have a vaccine passport to enter certain countries, or it may help them avoid quarantine once they arrive.

Israel has already instituted a vaccine passport, which allows holders to go to restaurants and gyms.

Britain and the European Union are considering vaccine passports, according to a recent article in the New England Journal of Medicine, and Australia, Denmark and Sweden "have committed to implementation."

"Although travel eligibility has been the primary focus to date, some use of passports to regulate access to social and recreational gatherings, workplaces, or schools appears imminent; Israel's green passes, for instance, permit entry to otherwise restricted sites such as hotels, gyms, restaurants, theaters, and music venues, and New York's 'Excelsior Pass' permits attendance at theaters, arenas, event venues, and large weddings," according to the article.

Pros and cons of a vaccine passport

The pros and cons of requiring a vaccine passport were encapsulated by business owners and managers in Florida, where the passports have been banned.

Rocco Mangel, who owns Rocco's Tacos and Tequila Bar in Delray Beach, said he has been vaccinated and would like others to be as well, but requiring his customers to have proof of vaccination to come into the restaurant "infringes on their rights," he told CNN.

"I do think that you would actually have people that were offended and there would be a perception that we're trying to govern them," Mangel said.

But Judy Lisi, CEO of the Straz Center for the Performing Arts in Tampa, Florida, says the governor's ban may hurt business.

"If you think about mass gathering places, like theaters and stadiums, and arenas, we're sitting right next to each other," Lisi said. "So it becomes really important to have a vaccine program as an option for our guests, and for our artists."