There's a huge mass embedded in the center of the moon, and astronomers aren't sure what it is 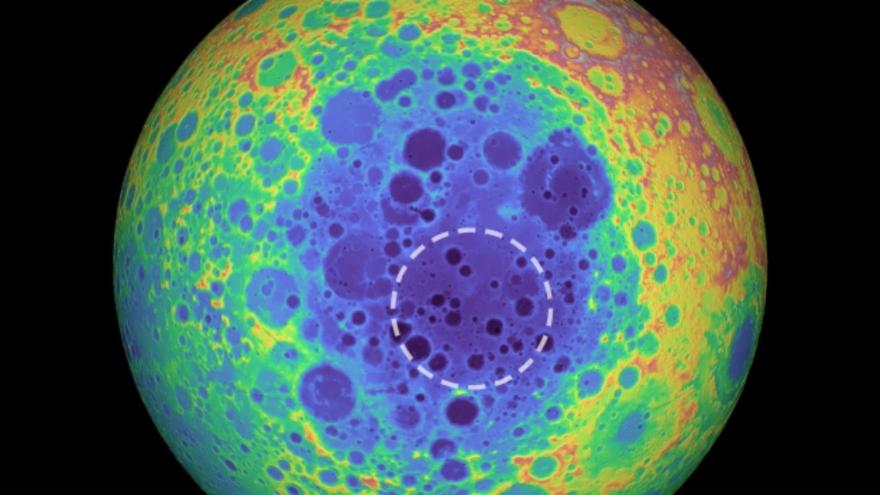 The colored image shows the South Pole-Aitken basin in blue, and the location of the mass under the surface is circled. CREDIT: Goodard Space Flight Center/University of Arizona/NASA

(CNN) -- Here is something you may not know about the moon: Earth's clingy best friend is also the site of one of the largest-known impact craters in our entire solar system. Essentially, something caused a giant hole on the moon billions of years ago, and astronomers have just discovered that there's something big -- really big -- buried underneath the surface.

"Imagine taking a pile of metal five times larger than the Big Island of Hawaii and burying it underground. That's roughly how much unexpected mass we detected," author Peter B. James said in a release.

The researchers from Baylor used various sets of data collected from space crafts that measure the gravity around the moon, and compared them to maps and imaging of the moon's surface. As a result, they found a dense metallic mass pulling down on the floor of the basin.

So, what is it? James and his team surmise it could be metal embedded in the moon's mantle from the asteroid impact that caused the crater some estimated 4 billion years ago. If that's true, it could be a time machine -- and a gold mine -- for scientists studying the history of the universe. All of that metal, and basically the entire area surrounding the mass and the crater, could tell them a lot about how the asteroid impact happened and what the solar system was like when it did.

"[The basin is] one of the best natural laboratories for studying catastrophic impact events, an ancient process that shaped all of the rocky planets and moons we see today," James said.

Unfortunately the crater -- and the mysterious substance below -- aren't visible to mere Earthbound humans, since they're on, literally, the far side of the moon.