There was a 28% increase in child Covid-19 cases over the last two weeks, American Academy of Pediatrics says 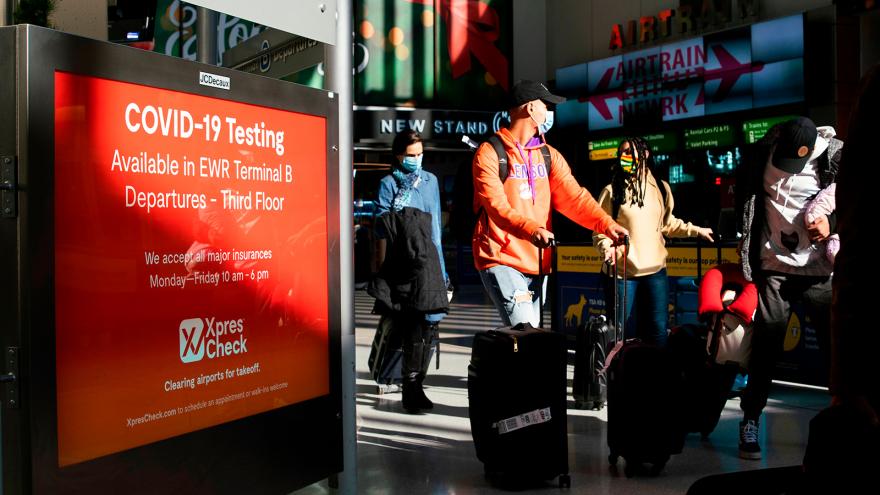 (CNN) -- As officials continue to warn about traveling over the holidays amid the fall surge, health experts are also investigating the virus' impact on children.

There were more than 144,000 new cases of Covid-19 reported among children last week, the American Academy of Pediatrics (AAP) said Monday.

Over the last two weeks, there has been a 28% increase in child Covid-19 cases and children now account for more than 11% of all confirmed coronavirus cases in the US, according to the AAP.

As of Monday, the US has reported more than 12 million coronavirus cases, and more than 257,000 coronavrius-related deaths, according to data from Johns Hopkins University.

That means, this Thanksgiving, hundreds of thousands of families will be missing a loved one due to Covid-19.

Now doctors are pleading for Americans to stay home to avoid a similar fate next year.

"What most concerns me now is, you know, the immediate situation with people traveling from different places, coming home for Thanksgiving," Dr. Anthony Fauci, director of the National Institute of Allergy and Infectious Diseases, said during an interview with the PBS Newshour.

"When you leave a location and have to go to an airport or wherever it is, a train station, etc., the possibility of exposing yourself and then going home to your home community for a wonderful traditional Thanksgiving holiday might actually, unfortunately, be a source of, or even amplification of, the surge."

Nationwide, new Covid-19 hospitalizations are soaring at unprecedented rates -- threatening reduced care for even those who don't have coronavirus.

At least 83,870 Covid-19 patients were hospitalized Sunday -- the 13th straight record-breaking day, according to the Covid Tracking Project.

Many hospitals are at capacity, diverting patients, delaying surgeries and closing pediatric units for Covid-19 patients.

"Look, the virus doesn't care how much you love people," said Dr. Jonathan Reiner, a professor at George Washington University School of Medicine. "So let's stay safe this year."

"This Thanksgiving is going to suck a bit. We need to be careful, and we need to take care of each other, which means we should really have Thanksgiving for people that we live with."

With the recent "exponential growth in cases," the US Centers for Disease Control and Prevention urged Americans to stay home and not travel for Thanksgiving.

"What is at stake is the increased chance of one of your loved ones becoming sick and then being hospitalized and dying around the holidays," said Dr. Henry Walke, Covid-19 incident manager for the CDC.

Yet more than 1 million travelers passed through security at America's airports on Sunday, according to the Transportation Security Administration.

That's the second day since Friday that more than 1 million passengers traveled through airports.

"It's really terrible. And all you're going to see is a week, two weeks from now, a huge increase in what's already a horrendous spike," said Dr. William Haseltine, a former Harvard Medical School professor and president of ACCESS Health International.

"These people are infecting each other, and they're going to infect the people that they're having Thanksgiving with. And there will be consequences in terms of disease and death as a result of what you're seeing today."

Testing can be very helpful for finding positive cases, so the infected person knows to stay home and isolate.

But negative test results can miss very new infections. And they don't help at all if you get infected after the test, such as at the airport or on a plane.

Many airlines now require face masks on board, but passengers can remove their masks to eat or drink. And studies have shown people can get infected on a plane.

If you do fly, here's how to make it safer

A percentage of people who recover from Covid-19 experience a set of symptoms -- a post-Covid syndrome -- that is raising concern, said Fauci.

Fauci was especially concerned for those who got seriously ill and were admitted into an ICU, even if it wasn't for Covid-19.

"Anyone that goes through that is not going to feel perfectly normal for a considerable period of time," Fauci said during a live video interview with The Washington Post national political reporter Robert Costa on Monday.

Health experts are finding anywhere from 20% to 30% of people who have had symptomatic disease "have what's called a post-Covid syndrome," Fauci said. The exact percentage isn't known yet, but a larger cohort study is being done, he said.

"Namely, they no longer have virus in them, they can't infect anybody, but it takes them anywhere from weeks to months -- and maybe even beyond -- to feel perfectly normal," he said. "They have a constellation of symptoms and signs that seem to be consistent when you talk to different people."

These symptoms can include extreme fatigue, shortness of breath -- even among people who are athletes -- temperature control problems, sleep disturbances and sometimes what is described as brain fog, or difficulty focusing or concentrating.

Fauci also told the Post he doesn't necessarily agree with states like New York and California reviewing Covid-19 vaccine data separately for themselves.

"I can understand, though I don't agree with they're doing that," Fauci told the Post. "I would hope that if they do that, they do it in an expeditious manner that doesn't delay anything."

States crack down after nationwide surge

"It's out of control. It's running rampant in communities around the country," she said Monday.

In Nevada, cases are rising at "wildfire level," Gov. Steve Sisolak said. He announced new restrictions that will begin Tuesday, including a mask mandate indoors and outdoors, limiting private gatherings to 10 people or less and requiring restaurants seat no more than four people at each table.

In North Carolina, Gov. Roy Cooper tightened mask requirements as the state adds 10 more counties to its "critical" list for Covid-19 spread, according to a news release from Cooper's office. The new requirements make it clear that everyone needs to wear a mask whenever they are with someone who is not from the same household, the release said.

The new requirements will also add the mask requirement to several additional settings including any public indoor space even when maintaining 6 feet of distance, gyms even when exercising, all schools public and private and all public or private transportation when taveling with people outside of the household.

The new guidelines in North Carolina will go into effect Wednesday, and remain in place until December 11.

"Additional state troopers will be assigned in every single county to work in partnership with county leaders, county health departments, liquor boards, licensing and permitting departments, as well as municipal and county law enforcement agencies to investigate any reports of violations of state law," Hogan said.

And in California, Los Angeles County officials are preparing to announce a "targeted safer-at-home order" this week that would only allow residents to leave their homes for essential work and services for a three-week period, County Health Director Barbara Ferrer said.

The new restrictions come after the county surpassed a daily average of more than 4,500 cases over a five-day period.

Freezer trucks at a Brooklyn pier continue to store about 650 bodies of Covid-19 victims who died in the spring, according to a report from the Wall Street Journal.

Many of the bodies are those whose families have not been located, or whose families cannot afford to pay for burial or funeral services, according to the WSJ article. The Office of the Chief Medical Examiner's office in New York confirmed the details of the Journal report to CNN.

WSJ, citing the New York State Funeral Directors Association, reported that the average cost of funeral arrangements in New York is between $6,500 and $9,000. New York City only provides $1,700 in burial assistance to residents, an increase of $800 since May.

"Those who we lost, their families are still trying to determine the best way to provide services for them, and just have been struggling because of the pandemic challenges," Mayor Bill de Blasio said Monday. "We're trying to work with each and every family of those we lost during that situation to make sure that they can have the kind of services they want at the right time."

Doctors say Americans won't need to hunker down forever -- just for the coming months, until vaccines help the country get closer to normal.

On Monday, drugmaker AstraZeneca said its vaccine showed an average efficacy of 70% in large-scale trials.

One big advantage of the AstraZeneca vaccine is that it doesn't need special, ultra-cold freezers -- it can be transported and stored at normal refrigeration temperatures.

On Friday, Pfizer and BioNTech applied for emergency use authorization (EUA) for their vaccine, which they said was 95% effective in trial and had with no health concerns.

The US Food and Drug Administration set a December 10 meeting for the Vaccines and Related Biological Products Advisory Committee to discuss possible emergency use authorization, FDA Commissioner Dr. Stephen Hahn tweeted on Sunday.

Pfizer/BioNTech's application came days after Moderna said its vaccine was 94.5% effective in a clinical trial.

But even if a vaccine gets the green light from the FDA, most Americans probably won't be vaccinated until the spring or summer of 2021, health experts say. On top of that, Americans who get the vaccine need to be prepared for the possibility they may feel a little unwell after, members of the CDC's advisory committee said Monday.

In the meantime, experts say tens of thousands of lives could be saved or lost -- depending on people's behavior.

Reiner said he normally celebrates Thanksgiving with people from different households, but "we're not doing that this year."

"It's just my family, hunkered down, because the stakes are simply too high," he said.

With promising news about vaccines, "there is a bright light coming," he said.

"But for now, we need to get to that point. So let's stay safe. Let's try and push the curve down a little bit. Protect our health care workers and protect each other, so that we can really have a great celebration next year."

CORRECTION: An earlier version of this story misstated the reporting period for the 144,145 new cases among children. It was from November 12 to 19.