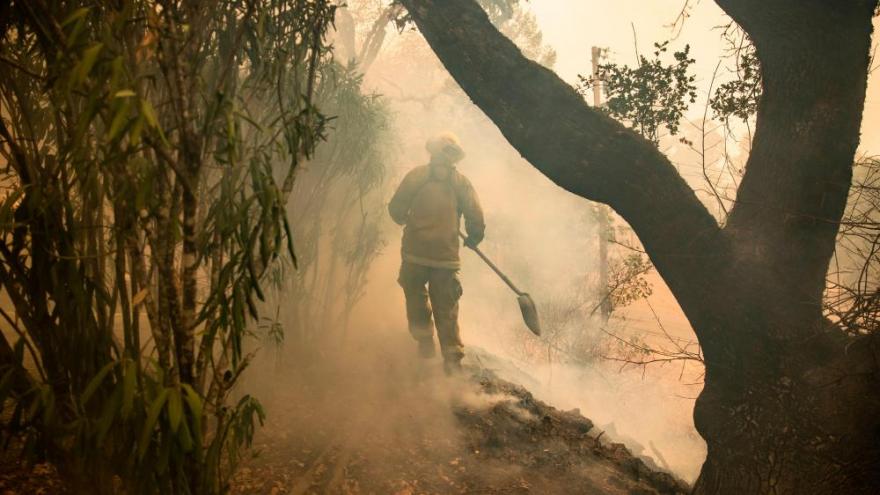 (CNN) -- California fire crews have spent the summer going from one fire to another as the state contends with a record-shattering wildfire season that has burned more than 3.9 million acres, killed 30 people, and is still weeks away from its potential end.

The Glass Fire in Napa and Sonoma counties and the Zogg Fire in Shasta County are raging out of control in the northern part of the state since igniting Sunday, bringing more distress to a fire season that has produced five of the six largest wildfires in California's history.

While winds have died down, unseasonably hot weather will complicate firefighting efforts, as the fire danger is elevated in many locations throughout the state and no rain is forecast for much of the West Coast this week.

Nearly 30 million people in California are under heat advisories, with temperatures topping 100 degrees in several areas, including Los Angeles.

In the North Bay area, where the Glass and Zogg fires exploded in a matter of hours, red flag warnings have been issued starting Wednesday night due to low humidity and breezy conditions anticipated overnight, NWS Bay Area said on Twitter Wednesday.

"It's been a long season. Most of (the firefighters) been going since the middle of July, without rest from fire to fire to fire here in the northern part of the state," said Cal Fire Incident Commander Billy See.

More than 2,000 fire personnel are battling the Glass Fire, which has consumed 48,440 acres and destroyed at least 82 buildings. It is threatening more than 22,500 buildings and is only 2% contained.

The fast-moving blaze forced two firefighters to deploy shelters Sunday night as they were overtaken by intense conditions fueled by high winds, Cal Fire said in a release. The shelters are aluminized cloth tents that reflect radiant heat and offer breathable air. The firefighters were uninjured but several transport vehicles were damaged.

The Zogg Fire is 9% contained and has torn through 55,046 acres. The fire has claimed the lives of four people, destroyed 146 structures and is threatening an additional 1,538.

On Wednesday, officials announced a fourth death in the blaze.

"A civilian who was badly burned in the Zogg Fire and was transported to the hospital, has succumbed to their injuries," Cal Fire said in a press release.

"It's unfortunate. My condolences go out to a fourth death that we've had as a result of this," said Shasta County Sheriff Eric Magrini, who also acts as the coroner. The man who died was taken to the hospital with significant burns on the day the fire started.

"The fire continues to burn in grass, oak woodland, chaparral, and mixed timber," a Cal Fire Incident update said Wednesday. "Hot and dry conditions are forecasted again for the evening with a northwest wind developing across the area."

Firefighters will continue to establish containment lines, according to Cal Fire. Over 1,300 personnel are battling the blaze.

Teams are working on keeping the flames from advancing toward Santa Rosa, See said Tuesday.

The latest blazes began Sunday, fueled by little rain, high temperatures and strong winds. The National Weather Service has warned that the hot weather will continue, issuing a heat advisory Tuesday for the region, with temperatures possibly reaching 105 degrees in the hottest locations.

"We still have months to go for fire season," said Cal Fire Unit Chief Shana Jones. "And that means that this could happen again. I pray to God it does not, but we still have a lot of fire season to go."

"You're standing in your driveway and looking at your house and you wonder if you're going to see it again," Cunningham said.

James Lindquist of Calistoga told the station that evacuations in the area happen a couple times every summer -- and it "feels like a beatdown."

"Look at it. How do you stop that?" he asked, pointing to the flames.

She said that about 160 evacuees from a senior living facility in Santa Rosa are temporarily staying inside several buildings spaced 8 feet apart.

Not everyone is fleeing the fires.

Ron Priest evacuated six weeks ago for nine days because of the LNU Complex Fire. Now, with a 500 gallon tank of water and a fire hose on his property, he told the station he is ignoring evacuation orders.

"Until I see fire, I'm gonna stay," he said. "People don't want to leave their homes if they can't get back and see what's going on. I don't wanna go, because I want to be here."

Vineyard steps in as firefighters are stretched thin

Just outside the Napa County city of St. Helena, the Glass Fire has destroyed a restaurant with three Michelin Guide stars.

The Restaurant at Meadowood, was reduced to rubble despite firefighters' fierce efforts to quell the flames, including creating assembly lines of hoses and engines to take water from a swimming pool, KGO reported.

Chateau Boswell is known as one of just a handful of privately owned family wineries remaining in Napa Valley, according to its website.

Video posted to Twitter by CNN affiliate KGO reporter Amy Hollyfield shows the charred remains of the chateau while nearby trees still burn.

Smoke from California's many fires has hung over swaths of the state for weeks.

Low level smoke is expected to drift into the Bay Area in the next few days, NWS Bay Area said Wednesday. Air Quality rapidly declined in the area Wednesday afternoon.

Wildfire smoke is expected to move north, making its way to Idaho in the next 24 hours, according to the NWS.