There is little research to back reports of northern lights sounds -- so what are people hearing? 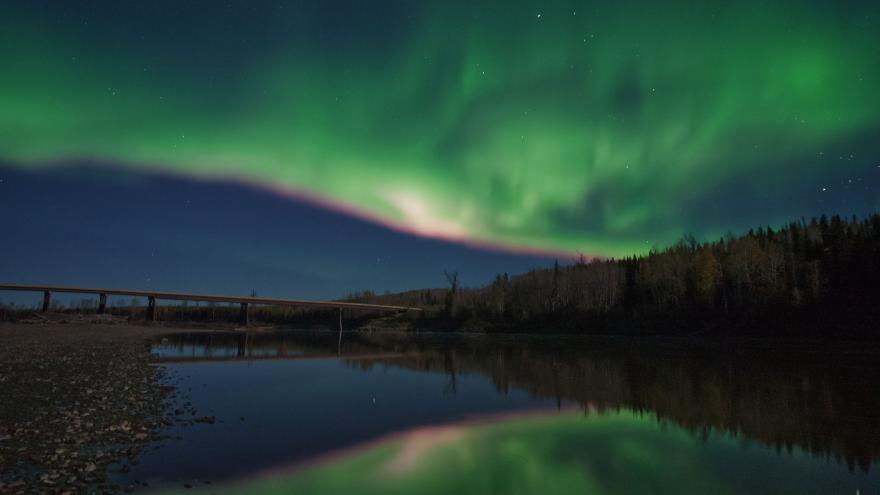 (CNN) -- In the dead calm of a winter's night on a remote Canadian stretch of the Alaska Highway -- without another soul in sight -- the sound of something sizzling echoed down the MacDonald Valley, where Ryan Dickie had driven to photograph the northern lights.

It was the evening after a particularly active display of the celebrated celestial phenomenon above Dickie's home in northern British Columbia. The 36-year-old Indigenous Dene photographer and conservationist from Canada's Fort Nelson First Nation decided to go someplace far from any light pollution to shoot what he hoped would be a similarly spectacular show in the sky.

But as he stepped outside into the frozen night to adjust his camera settings, it was the sound -- not just the sight -- that stopped him in his tracks.

"When you're living up here you hear stories that they (the northern lights) make a sound, and if you whistle at them that they'll come closer to the ground," Dickie said. "My grandma told me a story when they were kids growing up on the land near the Liard River about how the northern lights made clicking sounds, like you'd make to call your dog."

But when Dickie finally heard it, it was different.

"It was kind of faint at first, but almost sounded like a piece of meat hitting a frying pan," Dickie said.

Ears to the sky

Caused by solar flares on the surface of the sun, the northern lights -- also known as the aurora borealis or an aurora -- can appear in Earth's magnetic field as faint whitish or greenish cloudlike formations or even curtains of color and swirling explosions that erupt across the sky in greens, pinks and purple. In places like Arctic Alaska, Arctic Canada, northern Norway, Finnish Lapland and other northern reaches of the planet, where they're regularly seen, there are countless reports of people hearing sounds along with the aurora, too.

Mamie Williams, a member of the Tlingit tribe in Hoonah, Alaska, said that her grandmothers always told her to listen for the northern lights when she was a child.

"It's our ancestors letting us know, 'We crossed over but we're still here with you,'" said Williams, a cultural interpreter who works with Alaska Native Voices.

Williams first heard the aurora borealis make singing and crackling sounds when she was 14 years old and said she has heard it make similar noises since.

Once, when the sky was vibrant with purples and greens, she said she even heard the sound of drumming accompanying the lights in the sky.

"The brighter they get, the more you hear," Williams said.

But while accounts like those of Dickie and Williams are not unusual among both Indigenous and nonindigenous people living where the northern lights regularly can be seen, there so far has been little scientific research into the phenomenon.

"There's been years and years of anecdotal reporting of people hearing a whooshing or crackling sound," said Donald Hampton, a research associate professor at the Geophysical Institute at the University of Alaska Fairbanks who studies space physics and aurora and auroral interactions with the upper atmosphere.

"But if you think about it physically, there's no way you're actually getting sounds from the aurora itself."

That's because the northern lights occur between 60 and 100 miles above the Earth's surface and it takes sound several seconds to travel a mile, Hampton said.

"If you've ever counted after a lightning strike, it takes five seconds for sound to go a mile," he said, so if sounds were coming from the northern lights themselves they would take five to 10 minutes to be heard on the ground.

Still, Hampton does not discount the theory that the northern lights could be responsible for the sound people claim to hear.

Unto K. Laine first heard a sound accompanying the aurora borealis while visiting the remote northern Finland village of Saariselkä in 1990 for a jazz festival.

Together with four friends, the professor emeritus in acoustics at Aalto University in Espoo, Finland, "made the proposal to listen to the quietness of Lapland," he said. With the northern lights filling the sky above them, three people in his group that night heard not silence but soft sounds "like bursting soap bubbles," Laine said.

"We really had to be very quiet over two minutes and concentrate to the listening," he said.

It was an experience that never left him, Laine said, especially with all of the stories of people reporting sounds associated with the northern lights, while no scientific research was being done into the phenomenon.

"This question mark was permanently in my mind," said Laine, who has spent most of his career studying the phenomenon of sounds. He has a theory about what people hear and associate with the northern lights.

Published in 2016, his temperature inversion layer hypothesis posits that the sound people associate with the northern lights actually comes from electric discharges at lower altitudes of around 70 and 90 meters (230 and 296 feet). Those sparks, he theorizes, emit from the aurora during calm and clear weather when a temperature inversion layer -- or a layer in the atmosphere in which the air warms with height instead of cooling with height -- is produced.

"In the evening of a sunny day warm air close to the ground starts to rise while the ground temperature drops. Finally, the rising of the warm air stops typically below an altitude of 100 meters (328 feet)," Laine said. "This layer of a warm air, having colder air above and below it, is called temperature inversion layer."

Hampton said that Laine's theory is "not out of the realm of possibility."

"He's going with the assumption it has to do with electricity," Hampton said. "A strong electric field could set up mechanisms by which you could get air vibrations or little discharges that could pop or snap."

The project is funded in part by the European Union as well as the support of 200 local volunteers.

The hope is that the four microphones -- which can pick up the same sounds as the human ear -- will be able to pinpoint where the sounds are coming from, helping to prove or disprove Laine's theory, said Arto Oksanen, the observatory's president.

"We are trying to hear the same sound with three or four microphones located a few meters apart," he said. "By measuring the time delay in each recording, it is possible to calculate the three-dimensional position of the sound source -- or at least the direction to the sound source."

Combining that result with the electromagnetic signal measured with a VLF antenna, Oksanen said, will also give the distance of the sound source.

Oksanen, who said he is "open to anything and making recordings," admitted being "a bit skeptical" that the northern lights are producing the sounds, having spent hundreds of hours watching auroras without hearing them.

"There have been so many stories of people hearing the sounds, I don't think they're making it up," he said. "But I don't know if it's true acoustic sounds. Nowadays, it should be very easy to record it since everyone has a phone. So why aren't there recordings?"

Compared to the portable setup Laine has used to make recordings so far, the observatory's setup will be permanent and "allow us to collect much more data," Oksanen said. Adding an additional microphone also "gives further confidence and error analysis," he said.

"Many universities and scientists don't believe in the sounds, and they aren't even applying for funding to make these recordings," he said. "So maybe we can find something that nobody has found before."

Not everyone needs a recording to be convinced the sounds exist, however.

"It was definitely the sound I'd always heard they made," Dickie said of the night along the Alaska Highway and the show in his sky -- and in his ears -- that he'll never forget.

"I was certain it was the sound of the northern lights."