‘There is a cop hiding behind this sign’: The story behind a popular billboard 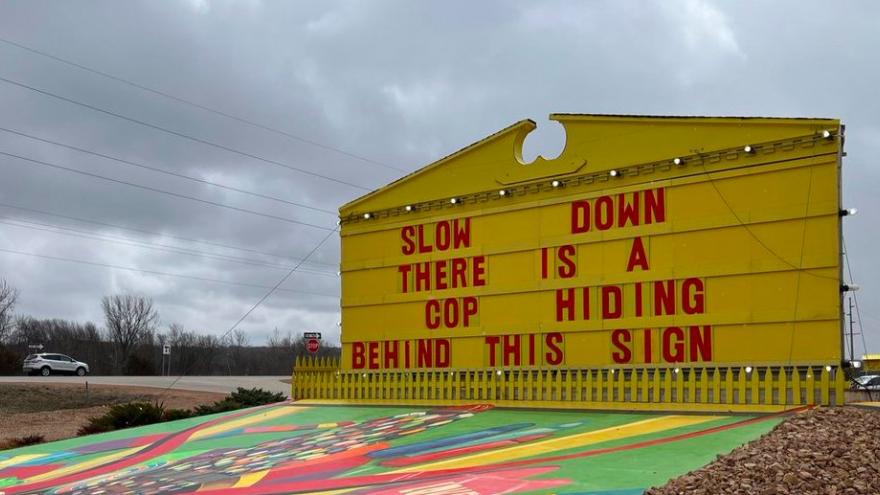 JORDAN, Minnesota (WCCO) -- The Scott County Sheriff’s Office has joined together with an unlikely partner in the effort to slow down speeders – the Minnesota’s Largest Candy Store.

Located along Highway 169 in Jordan, the roadside attraction sees upwards of 20,000 cars pass by each day. Many of them go well above the posted 65 mph speed limit.

“This road is a fast road,” said Rober Wagner, who owns Minnesota’s Largest Candy Store. “When you back away from law enforcement on that road, the speed starts getting faster and faster and faster.”

Wagner says he’s used the signs outside his business to attract the attention of drivers since the location opened in 1978.

“I’m not going to say it’s road rage, but we experience the people really driving fast around us,” he said.

Wagner tried to propose the idea of using the signs to curtail speeders to multiple people.

“It had not gotten positive feedback,” he said.

That changed when he mentioned the idea to Scott County Sheriff Luke Hennen.

“I think law enforcement sometimes gets put in a box of – it’s simply enforcement or transactional, but really, it is community based. As a county sheriff, I embrace that,” Hennen said.

This week, the sign changed to read “slow down – there is a cop hiding behind this sign” for drivers headed south on 169. On the other side of the sign sits an empty Scott County Squad Car, along with the message: “shhhhhh, I’m waiting for a speeder.”

“[People have said)]‘Did you just see that? Did you know there’s a squad car out by the big sign?’,” Wagner said. “It gets your attention, you know, ‘Boom, hey what’s that?’”

“We were hoping to impact our local community,” Zellner said. “Now we’re seeing across the nation people are sharing the story and talking about it.”

Zellner says in addition to the sign, officers from multiple jurisdictions will patrol the area over the next week.

As for how long the sign will remain posted – Wagner says the response has extended the amount of time from one week to at least two. When the store opens for the season May 6, it will likely change.