There are as many National Guard members activated in the US as there are active duty troops in Iraq, Syria and Afghanistan 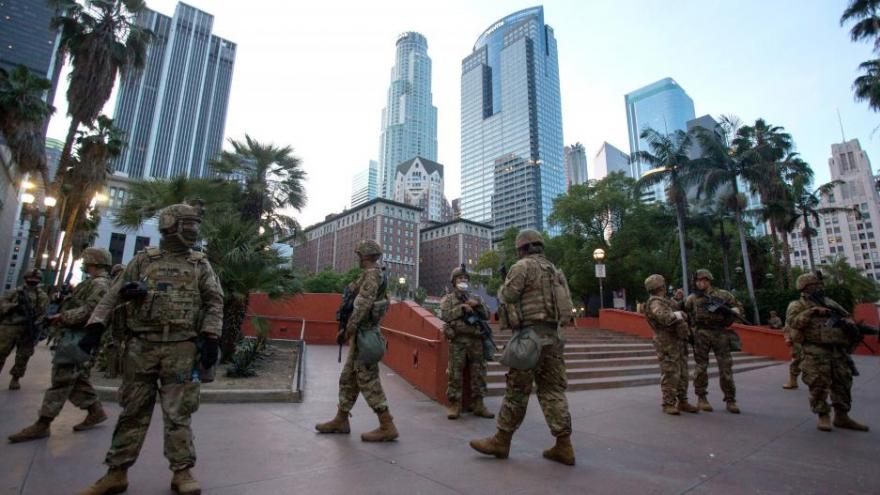 (CNN) -- As thousands across the US take to the streets for another day of protests demanding justice for George Floyd, more than 17,000 members of the National Guard are standing ready to support local law enforcement.

That represents approximately the same number of active duty troops deployed in Iraq, Syria and Afghanistan.

As of Monday, nearly half of the US has activated guard members to respond to civil unrest.

Additionally, about 45,000 National Guard members are supporting the Covid-19 response across all 50 states, three territories and D.C., bringing the total number of activated National Guard soldiers and airmen to 66,700.

"First we are ending the riots and lawlessness that has spread throughout our country," Trump said, adding that he's strongly recommended to governors to deploy the National Guard to "dominate the streets."

Georgia Gov. Brian Kemp, who authorized up to 3,000 National Guard troops on Saturday, tweeted, "These highly trained citizen soldiers will partner (with) law enforcement to preserve peace and protect Georgians in every corner of our great state."

On Sunday, Kemp shared pictures of military vehicles lined up and retweeted photos posted by Georgia National Guardsmen training with shields and batons in their hands.

This mass activation of the National Guard comes amid a seventh day of protests over the death of Floyd, a black man who died at the hands of a police officer in Minneapolis, Minnesota.

While the former officer who was seen kneeling on Floyd's neck was charged with third-degree murder and manslaughter, protesters are saying that the charges aren't harsh enough and are demanding that the other three officers involved be charged as well.