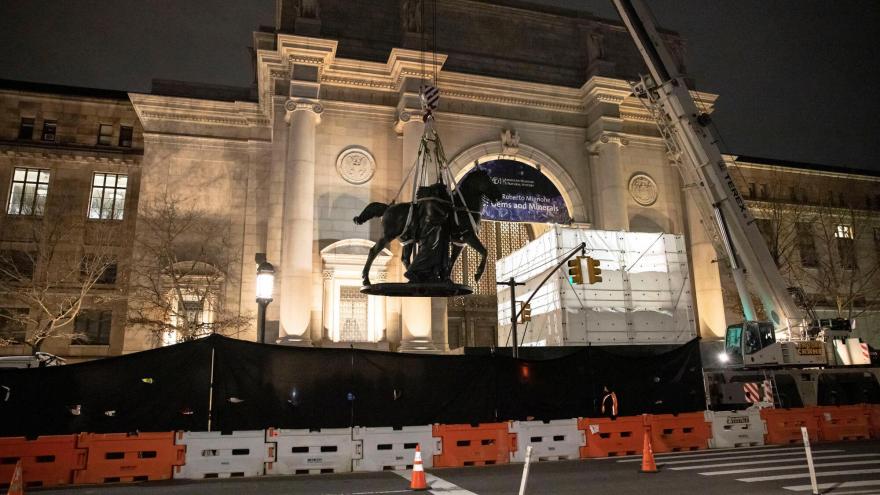 Workers remove part of a statue of Theodore Roosevelt that had stood outside the entrance to the American Museum of Natural History since 1940.

(CNN) -- A statue of US President Theodore Roosevelt that sat in front of a New York museum for nearly 80 years was removed this week after criticism over its "racial" image.

The sculpture, which was located at the American Museum of Natural History, featured the 26th president on horseback with a Native American man and an African man on either side of him.

A museum spokesperson told CNN in a written statement on Thursday the process of removing the statue was "conducted with historic preservation specialists and approved by multiple New York City agencies". It will include a restoration of the plaza in front of the museum.

Removal began Tuesday and the sculpture was gone as of Thursday, after a year-and-a-half process.

The museum first requested the statue be removed in June 2020, after the killing of George Floyd in Minneapolis and the global protests that followed. The Roosevelt statue now joins a number of other US monuments that have been relocated over the past few months. Most of these removals, if not all, were prompted by the 2020 protests.

"The statue itself communicates a racial hierarchy that the Museum and members of the public have long found disturbing," the museum wrote in its June request. This is conveyed in the statue's composition: the white man, Roosevelt, is placed in the center on horseback while the other two men are behind him, walking.

A new home for the statue was announced last November: Medora, North Dakota, about two hours west of Bismarck, in the Theodore Roosevelt Presidential Library.

The library, which is set to open in 2026, said in a statement it had reached a long-term loan agreement with New York City.

Since 1940, the sculpture had stood in front of the New York museum and was originally commissioned to celebrate Roosevelt.

"The Museum is proud to continue as the site of New York State's official memorial to Theodore Roosevelt," it added in a written statement.