Their first date was 204 days long 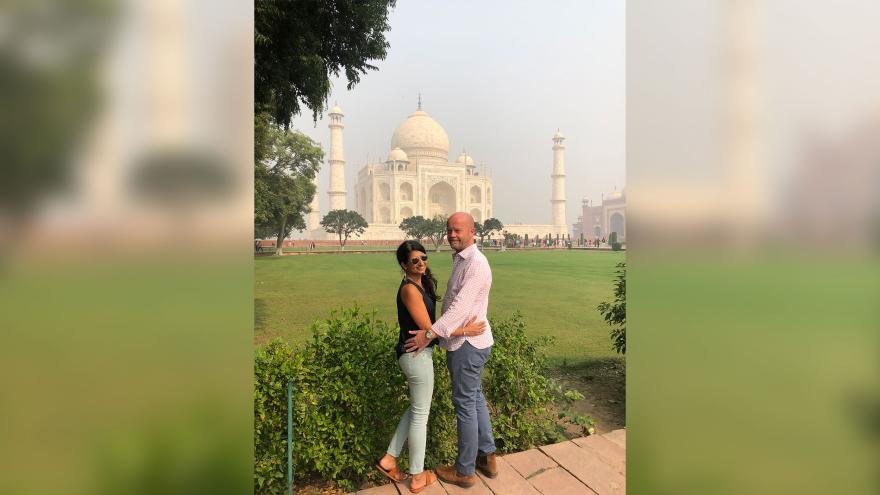 Editor's note: Two years ago, Covid-19 turned the world upside down. While the pandemic is not over, The Best in Us is a series that highlights people whose pandemic stories exemplify the resilience of the human spirit.

(CNN) -- Anju Tomar drove south down I-65, wondering if she was making a big mistake.

She traveled often for work, but had never done something like this -- driving across the country, during a pandemic, to meet a man she'd first spoken with for a few hours the night before on FaceTime.

"Am I even doing the right thing?" she thought. "This is crazy."

But Tomar was excited, too. She'd felt such a strong connection with Mike Faith hours earlier. She liked how quickly he wanted to talk after they'd matched on a dating app. His British accent charmed her. And they'd quickly bonded over their shared experiences as immigrants in the United States.

So when Faith mentioned that he'd hop on a plane to meet her in person "if it were normal times," Tomar found herself saying something that surprised her. "Well, it's only an 8.5-hour drive."

Before long, she was in her SUV and on the way from Milwaukee to Nashville one morning in April 2020. At the very least, she told herself, she'd just stay for a day or two and end up with a new friend.

Even now, nearly two years later, she's amazed by all the things that happened next. If it hadn't been for the pandemic, she says, everything might have turned out differently.

At his home in Nashville, Faith was waiting for Tomar's arrival. He'd felt the connection, too, and was impressed by how eager she was to meet up in person. He'd dated around and had started saving his dates' names in his phone with descriptions of his first impressions. Something felt different about this one.

"It just felt really easy and relaxed and fun," Faith says. "After we talked, I said to my friend, 'This one's good.'"

In his phone, he wrote: "Anju Odds-On Favorite."

Tomar and Faith are both in their 50s and divorced. Both have grown children.

Once they met up in person, the two discovered even more points of connection.

Tomar is Indian. Faith's kitchen was already full of Indian spices; it's among his favorite cuisines to cook.

He took out his ukulele and played one of his favorite songs; it turned out to be a prayer she says every day.

They had a shared love of music. And both loved to travel for work and for fun.

Faith is a CEO. Tomar works in the corporate world. Staying home for days on end isn't their style. During their first conversation, Faith remembers asking Tomar what he says is a crucial question: "Can you travel with just one carry-on bag?"

Her answer was yes.

But at that time, neither one of them was flying. The pandemic had sent their lives -- and almost everyone else's -- grinding to a halt.

In their case, Faith and Tomar say that was a good thing.

In normal times, "it would have been a date for a day, and then maybe again in a couple weeks, and then who knows," Faith says.

Instead, by their calculations, their first date ended up lasting 204 days.

They say spending so much time together helped them grow

They would travel between Nashville and Milwaukee -- sometimes together, sometimes on different planes hours apart.

"If we were together within 24 hours, that was still the same day," Tomar says.

The shift toward remote work made staying side by side for long stretches of time possible.

"Both of us are super social, but we became so content just being," Tomar says.

They'd watch sunrises, dance to their favorite music and cook together.

"It slowed us both down in a good way, where we could focus on our health -- mentally, physically, emotionally -- and then build our relationship on that," Tomar says. "It just kind of opened up the world. It gave us time to grow together. ... We were talking to each other nonstop."

About 60 days in to that first date, they bought a condo together and moved in.

It was the kind of thing that would alarm them if their children did it.

But in this case, he says, it felt right.

The two say they weren't shy about sharing news of their relationship with loved ones.

Some of Tomar's family members were worried when they heard how fast her new relationship was moving.

Tomar saw things differently. Seeing so much pain caused by the pandemic, she says, made her even more determined to live in the moment.

"Why does a person have to go slowly? I think we spend too much time brooding," she says.

Now they're getting to know each other's roots

As pandemic lockdowns eased and the world started opening up again, so did their relationship.

They've started traveling more, and spending time with friends and family has become an important part of their life together, too.

Among the highlights of their travels: visiting the United Kingdom and India and seeing each other's roots.

"I was eager to show her London my way," Faith says, "and show her how to get around through all the backstreets. It was really interesting to just walk around and show each other our places."

Faith still has Tomar's number labeled in his phone as the "odds-on favorite."

"We feel really lucky," he says. "I think it was just a lot of luck that came our way during some very difficult times."