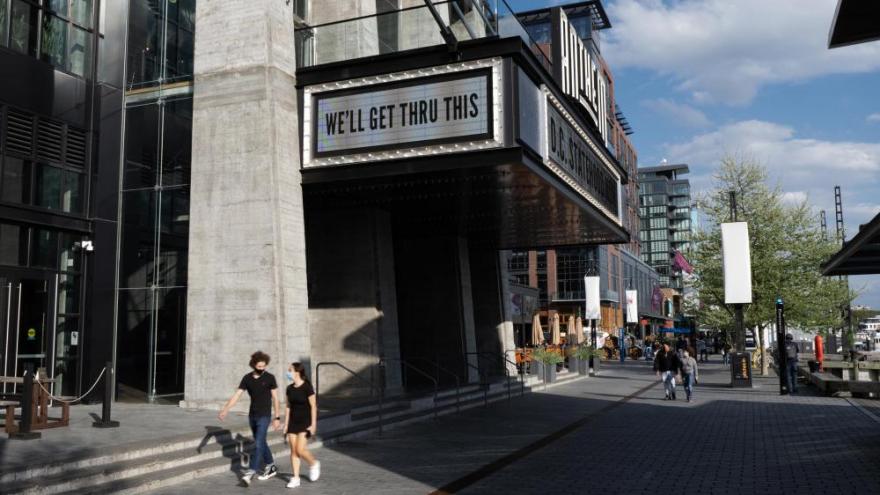 The Anthem, a music venue in Washington, DC, closed for the pandemic in March 2020 and has not yet reopened.

(CNN) -- They were the first businesses to close and will be some of the last to reopen, yet owners of independent theaters and live music venues have been waiting nearly four months for a $16 billion federal emergency grant program to launch.

The funding for what's known as the Shuttered Venue Operators Grant program was approved by Congress in December as part of a sweeping $900 billion Covid relief package. In mid-March, the Small Business Administration finally announced that it would launch the application portal on April 8 -- but it crashed within hours due to technical problems and remains offline.

The agency has yet to set a reopening date, and a spokesperson said that it found additional problems it's working to resolve.

That leaves owners like Stephen Chilton, who runs The Rebel Lounge in Phoenix, completely in the dark about when he might see the relief money. Arizona lifted restrictions on reopening earlier this month, but he doesn't have the money it takes to staff up, book bands and market shows.

"I don't know how to reopen in full without these funds," said Chilton, who spent hours trying to apply for one of the grants last Thursday before the portal was pulled offline.

The Rebel Lounge's revenue was down more than 90% last year. It reopened as a coffee shop, but the 300-person capacity rock club hasn't held any shows and is losing money every month.

A long wait for relief despite bipartisan support

Soon after states and cities shut down last March, industry leaders banded together to form the National Independent Venue Association and launched a lobbying campaign known as Save Our Stages. The group now has 3,000 members.

The pressure helped create bipartisan support for an emergency grant program. A bill was introduced in the summer by Republican Sen. John Cornyn of Texas and Democratic Sen. Amy Klobuchar of Minnesota. Senate Majority Leader Chuck Schumer of New York was a big advocate and could be spotted wearing a "Save Our Stages" mask on Capitol Hill.

But live venue owners were kept waiting until December's relief bill. It provided $15 billion in grants for live venue operators and promoters, theaters, and some museums, zoos and aquariums.

Owners were still waiting for a chance to apply for a grant when Congress passed another huge Covid relief bill in March, known as the American Rescue plan. It added $1.25 billion to the program.

When the portal failed to open last week, it was the last straw for many venues that have been struggling to hold on.

"We thought our life preserver was finally here," said Audrey Fix Schaefer, a board member for the National Independent Venue Association and communications director for a group of venues in Washington, DC, including The Anthem.

"I've heard of more venues closing up over the past week. When you have no revenue and all the overhead, no organization -- no matter how successful they were before the pandemic -- can survive," she said.

Many live venues are also eligible for those other programs, though the Paycheck Protection Program loans were meant to last only a few months. Those who receive a grant from the Shuttered Venue Operators program could receive a larger sum and won't have to pay it back.

The new grant can total up to $10 million or up to 45% of their 2019 revenue per eligible business, whichever is less. The money can be used for expenses such as payroll costs, rent, utilities and personal protective equipment.

The Small Business Administration is also charged with running a new $29 billion grant program for struggling restaurants, which was included in the American Rescue plan approved by Congress in March. The agency has said it could launch that application process this month, too, but has yet to set a date.