The wreck of a WWII US Navy aircraft carrier, lost for 76 years, has been found in the South Pacific 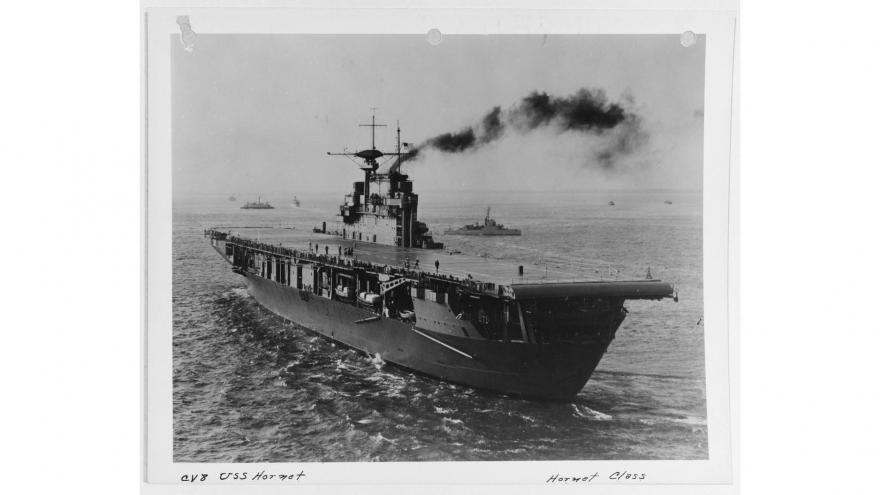 On October 26, 1942, the USS Hornet was mortally wounded in a Japanese onslaught during the Battle of the Santa Cruz Islands. She carried 2,200 crew, 140 of whom were lost that day. Full credit: US Naval History and Heritage Command

When the warship slipped beneath the waves early the next morning, it was the last time a human eye had gazed upon the Hornet's gray hull.

Late last month a research vessel called the R/V Petrel found the World War II aircraft carrier's wreckage more than 17,000 feet below the surface of the South Pacific, near the Solomon Islands.

It had lain dormant on the murky ocean floor -- some three miles beneath the surface -- for more than 76 years.

The ship's discovery was announced Tuesday by Vulcan Inc., the company founded by the late Microsoft co-founder Paul Allen, which owns the Petrel.

To find the Hornet, the expedition team aboard the Petrel used data from the archives of nine other US warships that sighted the carrier in the days before its demise. They plotted out a search grid focused on the warship's last known location.

The Petrel carries two onboard robotic vehicles which it deploys to plumb nautical depths as much as three miles below the surface.

The researchers sent down one of the robots, which found the Hornet on its first dive mission.

It was yet another success for the Petrel, which over the past few years has uncovered numerous World War II-era shipwrecks, representing vessels from the US, British, Italian, and Japanese navies. Last March, it discovered a different American aircraft carrier, the USS Lexington.

Robert Kraft, who heads subsea operations for Vulcan, said the Hornet was on their list as a key shipwreck of interest due to its "place in history as an aircraft carrier that saw many pivotal moments in naval battles."

The Hornet was famed for launching the Doolittle Raid against Tokyo and other Japanese sites in April 1942, showing just four months after the Pearl Harbor attack that the Japanese mainland was vulnerable to American air assaults. Two months later it played a pivotal role in the Battle of Midway, in which it helped sink four Japanese carriers.

That decisive victory turned the tide of the war in the Pacific.

Although the Hornet was highly decorated, its time at sea was brief. After service in Guadalcanal, the warship was bombarded by Japanese dive bombers and torpedo planes in the Battle of the Santa Cruz Islands. The Hornet sank, and the Japanese won the battle.

But it came at great cost to Japanese forces.

"About half the Japanese aircraft engaged were shot down by greatly improved U.S. Navy anti-aircraft defenses," retired Rear Adm. Samuel Cox told CNN. "As a result, the Japanese carriers did not engage again in battle for almost another two years."

"This is like Arlington (National Cemetery) for us," he said.