The world's rivers are drying up from extreme weather. See how 6 look from space 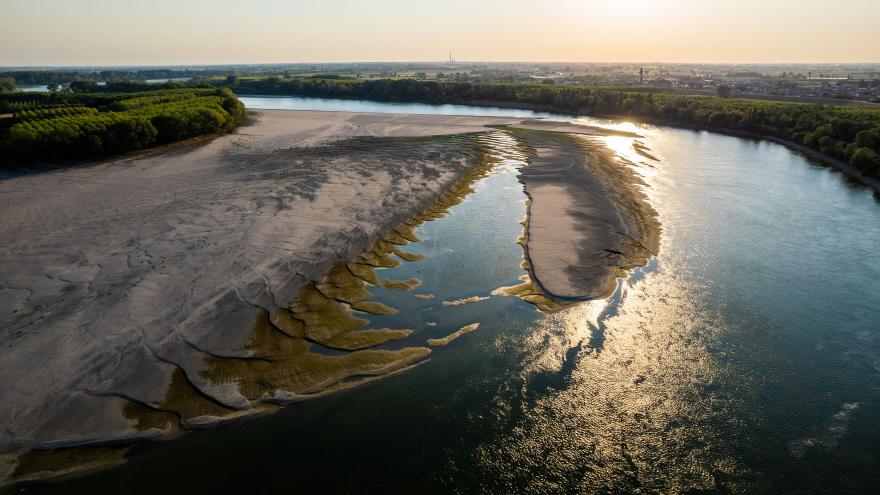 (CNN) -- To be stuck "up a river without a paddle" is an expression for a sticky situation you just can't get out of. But if that river happens to be in the northern hemisphere this summer, it's likely the paddle won't be helpful, anyway.

A painful lack of rain and relentless heat waves are drying up rivers in the US, Europe, Asia and the Middle East. Many are shrinking in length and breadth. Patches of riverbed poking out above the water are a common sight. Some rivers are so desiccated, they have become virtually impassable.

The human-caused climate crisis is fueling extreme weather across the globe, which isn't just impacting rivers, but also the people who rely on them. Most people on the planet depend on rivers in some way, whether for drinking water, to irrigate food, for energy or to ship goods.

See how six of them look from space.

The Colorado River is drying up at its banks and thinning out, as a historic drought in the US West shows little sign of abating. The river is crucially maintained by two of the country's largest reservoirs, and to safeguard the river basin, the government has implemented mandatory water cuts and asked states to come up with additional action plans.

One of those reservoirs, Lake Mead, is shrinking in size as water levels drop toward "dead pool" status -- the point at which the reservoir won't be high enough to release water downstream through a dam. Its water levels have been on a downward trend since 2000, but have had a sharper drop since 2020. The lake has dropped so low in the past year that wild discoveries have been made, including human remains in a barrel -- a suspected homicide victim from decades ago. And the consequences of the Colorado River crisis are enormous: Around 40 million people in seven states and Mexico rely on the river's water for drinking, agriculture and electricity.

The Yangtze River in Asia is drying up at its banks and its bed is emerging in some areas. But it's the Yangtze's tributaries that are already intensely parched. China has announced a nationwide drought alert for the first time in nine years, and its heat wave is its longest in six decades.

The impact of the drying Yangtze has been enormous. In Sichuan, a province of 84 million people, hydropower makes up about 80% of electricity capacity. Much of that comes from the Yangtze River, and as its flow slows down, power generation has dwindled, leaving authorities there to order all its factories shut for six days. The province is seeing around half the rain it usually does and some reservoirs have dried up entirely, according to state news agency Xinhua.

The Rhine starts in the Swiss Alps, flows through Germany and the Netherlands and then flows all the way out to the North Sea. It's a crucial channel for European shipping, but right now, it's a nightmare to navigate.

Parts of the river's bed have emerged above the water's surface, meaning the ships that do try to pass it must weave around a series of obstacles, slowing the entire process.

The Rhine has many different gauges along the way, including in Kaub, just west of Frankfurt, Germany, where water levels have fallen to as low as 32 centimeters (12.6 inches). Shipping companies generally consider anything less than 40cm on the Rhine too low to bother with, and in Kaub, less than 75cm usually means a container ship has to reduce its load to about 30%, according to Deutsche Bank economists. Low water levels also mean companies pay higher levees to pass, and all these factors make shipping more expensive, a cost usually passed on to consumers.

The River Po cuts right across the top of Italy and flows out east into the Adriatic Sea. It's fed by winter snow in the Alps and heavy rainfall in the spring, and has a steep fall that brings a fast flow. Typically, devastating floods are more of a problem around this river.

But now, the Po looks very different. Winter was dry in northern Italy, so snow provided little water, and spring and summer have been dry, too, plunging the region into the worst drought its experienced for seven decades. It's so dried up that a World War II-era bomb was recently found amid its dwindling waters.

A big problem is that millions of people rely on the Po for their livelihood, mostly through agriculture. Around 30% of Italy's food is produced along the Po, and some of the country's most famous exports, like Parmesan cheese, is made here.

The Loire in France sustains a valley of vineyards that produce some of the world's most famous wines. The river stretches over around 600 miles and is considered France's last wild river, supporting biodiverse ecosystems throughout the valley, much of which is protected by The United Nations Educational, Scientific and Cultural Organization.

Parts of the river are fairly shallow already, but its levels and flow can change rapidly with the weather and as snow at its source melts. Some sections are so dried out from the lack of rain and extreme heat that people can cross by foot.

Satellite images from the French town of Saumur show more riverbed than water exposed in the Loire. The patches of land around it in the valley are mostly brown and withered — a year ago, they were a lush and green. Authorities are releasing water from dams into the river, mostly to ensure there is enough to cool four nuclear power plants that sit along it.

The Danube is Western Europe's longest river and a crucial shipping channel that passes through 10 countries. In Romania, Serbia and Bulgaria, workers are dredging the river just to ensure vessels can still navigate it.

It's not in as dire a condition as some of Europe's other rivers, but countries like Hungary are so reliant on the Danube for tourism, the impacts are already being felt. Some cruise ships have been unable to pass parts of the river to even reach Hungary. Those that are still running can't stop on their normal routes because so many stations have had to close as water levels on river banks fall. An average 1,600-ton vessel can now only navigate the Hungarian stretch without any cargo, according to the country's tourist board.